In game chat should show "Someone is typing"

Hi
Most people leave a game as soon as it ends, but most of the time they leave because there is no reason to stay while there is and you are typing that reason but the person doesn’t know you are typing something and assumes you are simply silent !
This is the reason i think the “in game” chat could really use a “Someone is typing” feature, for example “Person X is typing”.
I really think this will improve the communication quality in the site, thanks.

Because people who are inclined to leave the game after its conclusion are likely to stick around to see if the chatbox reports that “someone is typing”?

No, that would just be a gimmick. I don’t even consider it useful in a context where two people who agreed to a conversation (instant messaging window). It doesn’t add anything useful to a conversation. I remember when AIM implemented that feature (or when I first noticed it). All it did was spawn this silly meta-chat minigame (“why did you stop typing?” “weren’t you saying something?” “why did you delete what you wrote?”). It’s not just not helpful, it’s downright disruptive. If someone wants to communicate a thought, let them. If they decide not to, let them.

If you’d like to discuss the game, I suggest you ask your opponent either at the start of the game or during the scoring phase. If you have something else to share, you can also send them a personal message. 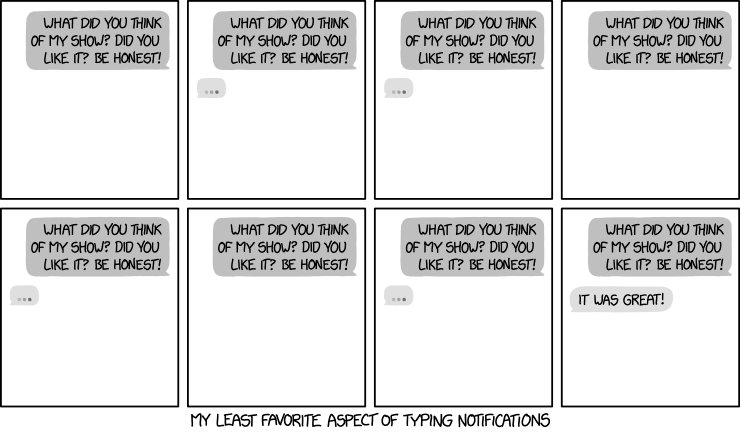 I like lichess’s solution to this. There’s a separate chat for participants and for observers. That means that any event in the participant’s chat can appear as a notification for the opponent - even if they’ve left the game. Simple and effective.

If you feel the need, you can contact you opponents after they left the game.

I think there should be some notification that there was chat activity in one of your finished games.

I also object to that… there is nothing here that messaging wouldn’t solve.

You assume that someone who leaves one of his games made a mistake and was now “missing out”. I don’t think so. If you have reasonable grounds to expect that there’s going to be a discussion about that game and you’d like to partake, you stick around. If you want to leave, you leave.

.
A little bit offtopic, but… for the same reason, there shouldn’t be a confirmation dialog for deleting scribbles. If someone clicks on the trash can by accident, tough luck, keep your scribbles simple enough to recreate quickly or be more sensible with your trigger finger.

I’m not aiming at a discussion, it’s just that I sometimes write some text when I end a game, and then my opponent reacts to it, but I don’t see it until hours or days later (if at all) because I have to go back to the game to check.

I agree that it is a point of friction that we have to even think about this.

Even though the impact of not-seeing what someone said after the game is minor, it’s an unnecessary glitch.

I agree with Vsotvep that an optional notification that someone wrote something in a finished game would be a nice improvement.

Note that this is off-topic in respect of “someone is typing”. “Someone is typing” appears to be a poor solution to the problem “how do I know if someone wrote something after I left”.

I actually would like to know if someone is typing, just during ongoing interactions in a correspondence game where we happen to have overlapped and are talking (eg teaching games).

a chat notification would also alert people in case a review was done for one of their games, in which case i think its reasonable to assume that they are indeed

Just because there is a work around to this problem doesn’t mean we shouldn’t address this minor UI issue which in my opinion can improve the user quality (you can see this if you have ever worked with messengers like skype, telegram which show a user activity by pointing out “User is typing”, this although minor, is a very helpful thing)

I agree to what you say, the problem “how do i know if someone wrote something after i left” is a big one, but my current thread doesn’t really address that issue, here i’m more concerned about the Chat UI quality which misses an already proven useful (in all the big messengers’s chat) feature which is showing the user activity.
But indeed i do agree with you that the whole communication notification in the site could use a polishing.