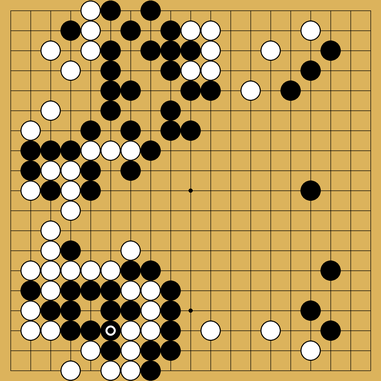 If you take a look at the game linked above, you’ll notice that the players were ranked 7k and 5k at the start of the game. But if you look at the ranks in the chat dialog they are 4k and 3k, even on the Move 0 chat. It’s also a live game, so there couldn’t have been significant rating changes during the game.

Why are these inconsistent? Which one is accurate to the new way of calculating ratings?

That game is very old, dating before the most recent change in the rating system. The old system was very complicated, and ranks could change based on new games played by old opponents. In other words, a person’s rank could change if the system discovered that an old opponent was weaker or stronger than the system previously thought.

Edit: It is also possible that the subsequent change in the rating system put the new ranks retroactively in the player display. I’m not sure. However, I do think it is related to the change in the ranking system.

I see. Yes, it is 100% retroactively altered because I was never at those ranks before. But the confusing part is that the retroactive altering seems to have applied differently to the player display and the ranks displayed in chat.