I was surprised today when I realized I had 2 games with 3 day max timers as I don’t play games with fewer than 5 days max time (preferably 7). When I looked at their settings I realized they were ladder games. I’m pretty sure ladder games and tournament games were all 7 days max timer originally, was this a change made recently? I can’t imagine what benefit this could potentially cause given that the time per move is still 1 day, and can easily see this leading to more time-outs.

Wow… Just withdrew from the ladders, and found out that the games were automatically lost! I’m pretty sure the old behaviour was to change the games into non-ladder games. The current settings made it hard to withdraw from ladders without losing games if you are constantly challenged. Furthermore, it would really be a good idea to provide a warning that all ongoing ladder games will be resigned with a user attempts to withdraw.

@illluck We made the change in ladder games max time, because otherwise a game would proceed too slow and “take forever”, thus decreasing the dynamicness of the ladder itself. Also, I believe there is a warning pop-up window that says when you withdraw, you will have to forfeit your games and start from the bottom again?

I got the message that I will have to start from bottom, but nothing about forfeiting games.

Also, why would decreasing the “max” timer speed up games when you still only need to play 1 move per day other than through causing more time-outs? I guess it might cause players to feel more rushed and therefore check more frequently, but isn’t that a bit contrary to the point of correspondence games? 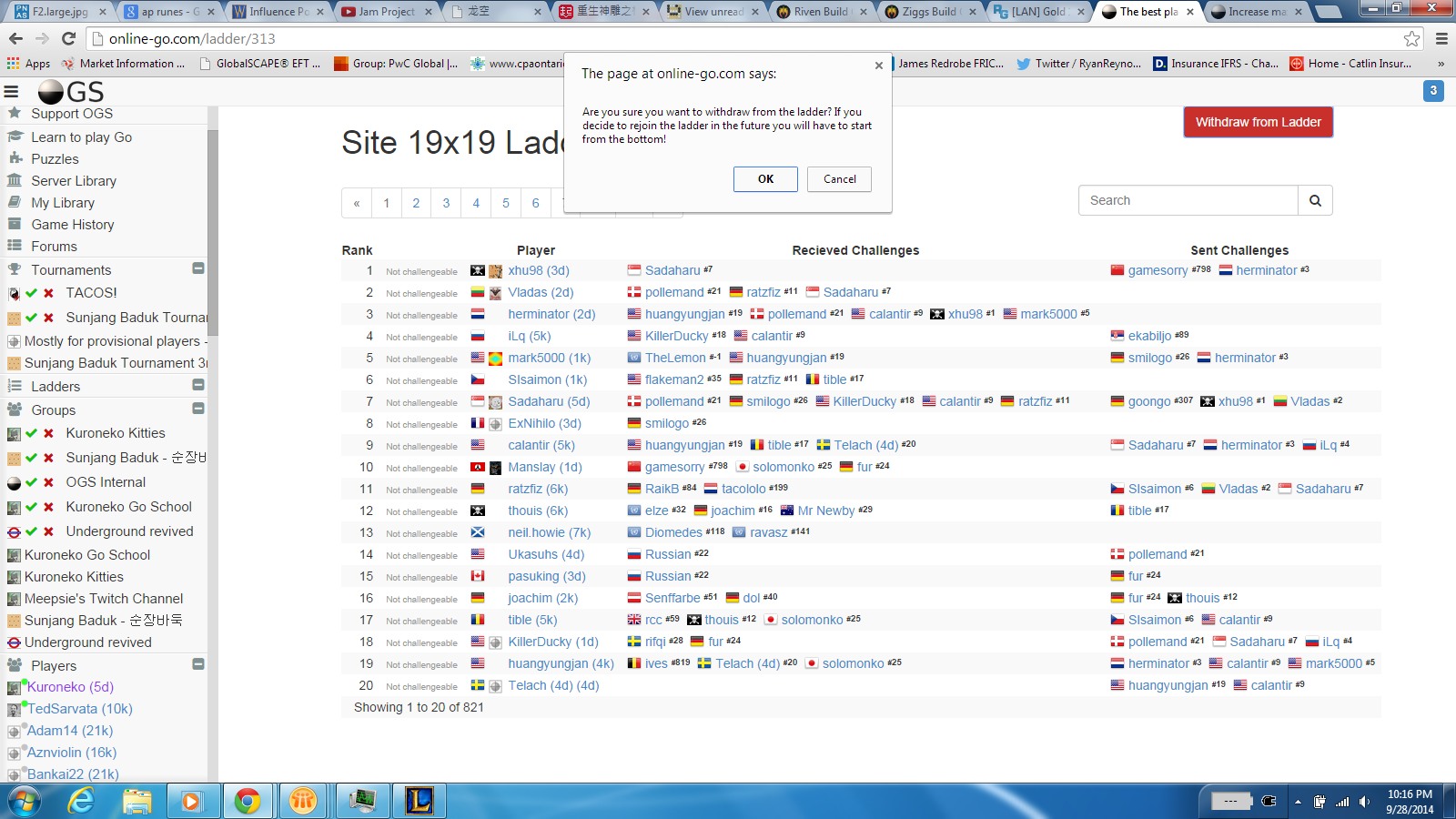 @illluck Thanks for the suggestion! I have fixed the typo and it should be changing by @anoek when he updates the next patch.

You are right, the message didn’t say forfeit the existing games. Might be a good point!

Ah, ok. Thanks for your quick response by the way

I still don’t agree with the time settings change, but maybe just that’s me being obsessed with not timing out XD

We’ve had this discussion in the past when the change was introduced. There’s actually statistical evidence that reducing the max time does in fact reduce the average game length.

I don’t think the ladder system is ideal as-is, but I can agree with this particular change because ladders really ought to be more dynamic and less stagnant than how they were previously. Rather than reverting to the old max time, the thing that should change from this point on is how to handle players who time out. I’m of the opinion that they shouldn’t be forced to restart from the very bottom. But again, we’ve had this discussion before and the developers are currently focusing on overhauling tournaments, so changes to ladders will have to wait (which is just fine by me, because I’m looking forward to the tournament overhaul).