Ineligible games and why they're labelled as such (UI feature)

For people with a mouse the Play page interface looks like this: 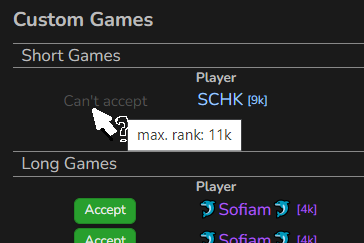 (I had to freehand draw the mouse pointer, since my screen capture doesn’t take it)

So people with a mouse can know why ineligible challenges are so labelled.

But people with a smartphone can’t hover their finger… so, is there any solution to that?

[pedant mode on] Yep, actually they can hover their finger over the phone, but they don’t get the same result

So people with a mouse can know why ineligible challenges are so.

So people with a mouse can know why challenges are ineligible.

As an aside, all of your sentences were perfectly legible. But as you noted they sounded a little unnatural. I think my two propositions would sound more natural.

why challenges are ineligible

Right.
I actually wanted to stress “like that” or “such”.
In Italian I would say “perché le sfide che non puoi accettare siano tali”

perché → why
le sfide che non puoi accettare → ineligible challenges
siano tali → are so defined, are like that, are such, are that way…

I actually wanted to stress “like that” or “such”.

I think this was once the case with English, but now such things are implied. If I understand you correctly.

But these all sound very clunky. Maybe suitable for a technical document or government report but not “plain English”.

Clunky is fine for me. I made a couple edits. Thanks a lot.

Now we just have to address the issue!

Would be great if we could get the long press to trigger the tooltips too.

That said, I’m a mostly mobile user and I don’t feel like I’m missing out…

Me neither. I rarely go on the Play page and usually have the “Show ineligible games” unchecked.
UI geeks could complain though.

UI geeks could complain though.

True. Although TBH, I’d fix the mobile layout on that page before worrying about the tooltips.

Are there still bugs in the eligibility logic? I used to find a game would be marked as ineligible when I was not outside the rank range. My guess was it was comparing the wrong of the many different ranks an account has.

Also I think if someone has blocked you then it lies and doesn’t tell you that’s why you’re ineligible. I don’t know if that’s a bug, or on purpose to stop you being angry.