I’ve seen this beautiful video years ago, and I think I shared it then, too, but that was long before the new OGS It definitely gave my understanding of influence a boost. Wish the video were longer … but then I guess I will just have to develop my own “X-Ray Vision” for my play

Quote from the YT page:

This video is a demonstration of a piece of code that I wrote to visualize the concept of influence in the game of GO. It’s a simple linear driven metric exponential distribution influence function. This game was played on 1933-10-10 in the Oteai, between Kosugi Tei (Black) and Go Seigen. White won by resignation.

The Beethoven sonata is a bonus.

<edit> I should give credits: It was L19 user Krama who reminded, in this thread. </edit>

whats up with that opening… i thought, why are they demonstrating this in a ddk game… then i saw that it was go seigen O_O

It was one of the games during the new fuseki era. Admittedly, this one was strange even for then, but a great game to learn about influence nonetheless

Is this not similar to what appears when you click “estimate score” in OGS? (Albeit with prettier colors)

I would LOVE to see something similar in the estimate score mode. The current way to visualize influence leaves a lot to be desired.

Influence and score estimation is such a complex thing, it would be like having the strongest AI watching our game, I can’t even imagine the server “brain” power that would be necessary for that. And, of course, to have that available for every running game, not just for yours

Sure! I never meant to criticize, OGS team does a simply amazing job! I’m just dreaming

But I really think we can learn to understand influence — I think I already did learn something from that short video — and then to project it onto the board, in our mind.

BTW, sometimes I get great pictures when I click the SE and then move backwards before the first move was made … 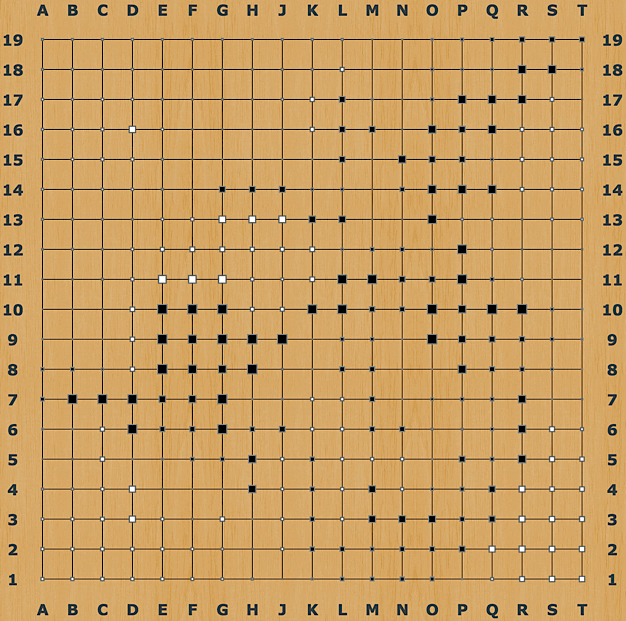 Is this not similar to what appears when you click “estimate score” in OGS? (Albeit with prettier colors)

While the effect looks somewhat similar, I think that the method in this video might be quite different than the OGS score estimation algorithm.

The OGS score estimator has been described as performing some sort of Monte Carlo method, which involves simulating many random play outs from the current position while using some heuristics to ensure reasonable simulations and to aggregate them into a judgement about which groups survive and which empty points are taken as territory by each player. I think the visualization of the estimate is based on the confidence of the judgment for each point.

As for the method used in the video, I’m not too sure exactly what is meant “simple linear driven metric exponential distribution influence function”, but based on the description and how the video looks, I would guess that something along the lines of the following is done:

Such a method could be considered “linear” since the visualization of each intersection is just the sum of the effects from each move. The animation interpolation would also likely linear.

The video looks neat, but I don’t think the method really illustrates influence nor territory properly. Even a group cut-off and forced to live small would diminish the influence of a surrounding wall. Also, this simple coloring method by itself is not able to factor in life/death considerations.

The current way to visualize influence leaves a lot to be desired.

The way I’ve always visualized the board is that each stone projects power in 4 directions with numbers of 8, 4, 2, 1 and then the influence is no more.

Glad to see somebody else thinks that way.

Yeah, I totally confused visualisation of influence and score estimation, thanks.

Each point away from a stone loses 50% influence.

Looking at the video, it’s seems that the creators of it have similar ideas.

Nice to see influence visualised, though the colours and the (IMHO too fast) movements make it painful for me to watch. 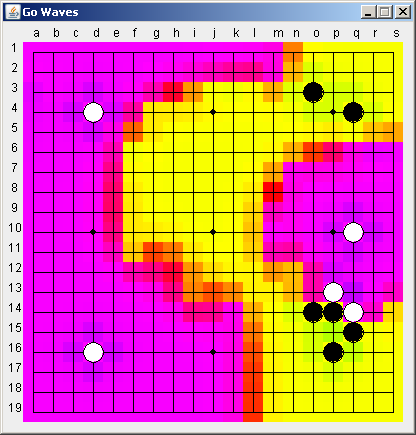 This is a java program, which uses moving waves of colour to explore the concept of “influence” in the game of Go. To the right is a screenshot of it – static, unfortunately. With the program, the colurs are constantly moving.

If you have java installed on your computer, download it and watch it running. If you have any feedback or suggestions, please report them to its creator, Nick Wilkinson.[/quote]