Is an endgame ko worth more in Chinese rules than in Japanese rules?

A situation arose in a game that caused me to wonder…

Is an endgame ko worth more in Chinese rules than in Japanese rules?

I think yes. My explanation is below. I would be interested to hear other people’s opinions on this. 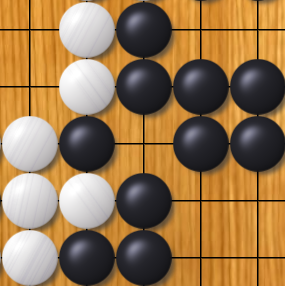 Assume all surrounding stones are alive, and all endgame plays have been done except one final 1 point gote somewhere else. Black to play.

So black cannot lose points by taking the gote move but will lose a point by winning the ko immediately.

So black may gain or lose if black takes the gote move depending on who is ko-master, but it’s an even exchange if black wins the ko immediately.

What do you think of this case? Have I interpreted it correctly? Do you know of any other related situations? Can you think of any counter examples? Cheers

This tactic has a name in Chinese Go terminology called - 粘劫收後, filling (by winning) the ko and get the last play/dame.

It’s under the circumstance where one side can start the ko and has more (valid) ko threats and can fill the last dame. Keep the ko going but don’t actually use ko threats, instead playing “neutral points” as if they are ko threats. If the opponent play the ko, keep playing ko. If the opponent fills dame, you also fill dame (treating dame move like a ko). When you get the last dame, and still have more ko threats (the opponents run out of valid ko threats, but only loss-making threats), the opponent would be forced to pass (or risk losing more and more), and you can finally fill the ko to get extra points.

There are even more extreme cases, where the ko are step-ko, and if one side has much more ko threats, when the opponents run out of (valid) ko threats, they would have to pass several steps, and under the Chinese rule, it would be winning step number more points.

If you are comfortable with territory-scoring, you should think of the situation as “scoring a point of territory inside the ko”. That would be, black getting the central “3-3” intersection in your picture as extra territory when winning the ko.

Let’s ignore area scoring for now, and imagine we play by territory-scoring rules (you can think we are using Lasker-Maas rules, or AGA-rules and counting territory for example, or maybe “Japanese rules of a different hypothetical universe”).

Normally, there are many trully neutral non-ko-threat dame in the board, say like 8-12 dame maybe (really depends on the type of game, like big moyo vs many fights etc). The last ko is fought before filling those dame, it is obviously more valuable than just dame. Often, you will not win this final ko-fight having lots and lots of extra ko-threats, but barely win it, maybe you will have just 1-2 extra ko threats compared to your opponent. So, the situation will be that you take the ko, your opponent fills a dame (he might pass but what for? playing dame is at least as good, maybe he gets to win the ko somehow by keeping playing instead of passing. A proper full game includes dame filling

). Now you might fill the ko and that’s it, you win it, you get the “last prisoner” you captured, but nothing else. You might fill a dame just to “show off”, because you know you still have one more ko threat. But if your opponent keeps filling dame, you can’t “show off” forever: you will HAVE to fill the ko, or else lose it (and your opponent might just fill it and complete it, not wanting to “show off”. You now lost the point of that “last prisoner” in the sequence of ko-captures).

Now, imagine the same situation I just described, but there is no dame, or very little dame compared to your ko-threats. Now you make the ko-capture, your opponent has no ko-threat… and there is NO dame! So, he HAS to pass (if he does not, he fills his own territory, losing a point… that is no better). Since he passed, you pass, to finish the game by two-consecutive passes. WOW! The ko is still open! You did not “fill” the ko! But you could do this because you had so many ko threats, that you managed to keep the ko open even until all dame were filled, and your opponent could do nothing, not even dame, other than fill his own territory and pass… so you pass to.

In this hypothetical situation… Don’t you actually deserve the extra point of territory of the unfilled ko intersection? You clearly controlled it, you had enough ko threats to keep it open!

Well, this is “the actual reason” behind the scenes for this fight: you are fighting for this extra point of territory! Lasker-Maas rules and AGA-rules when counting territory (with pass-stones) give you this extra point: since your opponent passes, he gives you a pass-tone, but THEN you can fill the ko instead of passing, so then your opponent has to pass AGAIN. The extra passing-stone that he gives you effectively works exactly the same as if you could just pass and reclaim this extra territory point.

Under chinese rules, the effect is basically the same because you just “fill” the ko, which is now YOUR territory, and it has no cost! Filling your own territory AFTER all dame are already filled, does not change the score in area-scoring rules (if you do it before ALL dames are filled, you DO lose points: as you are just territory-filling for a net +0 score, while your opponent fills a dame, for a net +1 score. It is just like japanese! you lost one point for prematurely filling your own territory!). So, under chinese rules, it works just as if you could count the ko-intersection as your territory, for one extra point if you manage to not only win the ko, but also leave the ko open until all dames are filled.

So, it seems that these fight makes sense in territory and area scoring rules, this is not a difference of area vs territory, but whether this last “ko intersection” territory can be counted or not. What do the Japanese rules say?

Well, this was a famous rules dispute involving Go Seigen twice. The Japanese ruled against Go Seigen BOTH times, even though Go’s position in the dispute was reversed each time! It seems that the rule at the time was actually “Go Seigen loses the point”. Rule disputes involving Go Seigen at Sensei's Library

Modern Japanese rules says that you CAN’T reclaim this extra territory point, even if you have an infinite number of Ko-threats. You just have to fill it, it is mandatory, sorry. So this is the real reason why there is no “dame-fight” in Japanese rules but there is in Chinese-Rules (and other chinese-like territory definitions, like that of Lasker-Maas territory rules).

Additionally, you might notice that in Chinese rules (or also AGA rules, but not in Lasker-Maas which work as territory rules!), depending on the parity of dame, this final “dame-fight” might be useless to fight because even if you win, the result does not change. In effect, if there is an EVEN number of dame apart from the ko when you can choose to fill it, then no matter how many of these there are, whether you fill the dame before or after the ko, you will always get half of them and your opponent the other half. Looking at it from our “territory-perspective” from the previous post, this is due to the “parity rounding” effect of area-scoring: The area score difference is (normally: flip even/odd if there is an odd number of points as dame in seki) precisely the territory score difference, but adjusted so that black gets one extra point IF the territory-score is even (this is because, the final area-score must be odd, and when the score is not the same as the territory-score, it is because black played one final dame for one extra point). So depending on the parity of the score difference (which will in turn determine the parity of the remaining dame), an extra one-point of territory might change the area score by either +0 or +2.

Again, this situation that “the fight is sometimes relevant and sometimes it is not” can be interpreted by territory-counting by the fact that only ONE territory point is in play (and the dame-parity of filling the ko before or after dame-filling is the same). This reinforces the interpretation that it is actually “the point of territory in the ko” that is under dispute.

As a recap of different rules (assuming positive score is in black favour):

I think something about your counting is off, since under Chinese rules the result changes only in multiples of two. Here, I made a review, is this the kind of thing you were talking about?

For this example I counted:

So it seems okay (but maybe neutral) to play gote first under Chinese rules, too.