Is anyone else having scoring issues

In the last couple of days my games are being scored super weird unless totally played out. Anyone else?

What do you mean by totally played out? Closing the borders between territories? You need to do that. Capturing dead stones you don’t need to capture? Your should mark dead at scoring (unless bot game and it won’t let you and you have to accept potentially wrong auto scoring). Forcing your opponent to play defensive moves inside their territory by filling dame? You need to do that.

If you mean this game Ladder Challenge: UJ35812(#2206) vs psicohistoriador(#1373) then it is correctly scored given you both passed and wanted to score that position. If White was stronger White may have realised he still had good moves to capture some of your stones, or if you were stronger you would have played some defensive moves losing points to prevent that, which is why KataGo shows a different score for its ESTIMATE ASSUMING HIGHLY SKILLED PLAYERS CONTINUE THE GAME TO ITS ‘CORRECT’ CONCLUSION which is not the same thing as a score tool.

In this game aperkins vs. UJ35812 the game wasn’t finished, White needs to connect at K5.

Also you need to mark dead stones before the score is calculated, the scoring system doesn’t always understand which stones are dead and which ones aren’t.

I see so one can no longer assume or agree with their partners that it’s concluded. For example this game It continues both white and I agree to each other’s areas but have no way to override the scoring system. Maybe having a way to click both dead stones and also call points live…for a color?

please disregard that game as it was a teaching game that I did not spend time on dead stones etc.

For example this game It continues

The territories are not closed at A8 and T9 so the game is not finished.

You can agree with your opponent to pass before more skilled players would recognise the game as being properly finished. You must then follow the rules of scoring. An area can only be territory if it is surrounded by stones of one colour (after dead stone removal). So if you choose to leave the borders open at a8 and t9, which is perfectly legal and you prerogative, then you have to follow the rules that the big area is not white territory because it is not surrounded by only white stones.

Also, can I ask, are you really 12k, or are you a beginner who OGS has assigned the inflated initial 12k rank to? These problems with scoring are ones which are generally left behind by a 25 kyu who is taught well. I’m trying to understand why misunderstanding of scoring amongst OGS players is higher than among beginners I and others teach in real life.

Although the game is not technically finished, it is easy to agree “lets score now as if we closed those few gaps”. Scoring this should be possible, it seems.

What are the precedents for this on other Go servers?

Although the game is not technically finished, it is easy to agree “lets score now as if we closed those few gaps”. Scoring this should be possible, it seems.

What are the precedents for this on other Go servers?

Oh God please no. Not this again. See the previous threads.

No other go servers allow this abomination.

I’m trying to understand why misunderstanding of scoring amongst OGS players is higher than among beginners I and others teach in real life.

One reason, as I have noted in another thread, is that large numbers of people new to OGS do not read the documentation and therefore do not know how to mark stones and territory during the Stone Removal Phase. A more recent source of confusion, which may be active for the OP, is that the previous autoscore system used to treat unclosed borders as if they had been closed (not scoring the intersections needed to do the closing). This was corrected in the recent autoscore revision, but the transition has apparently confused some people.

The previous provisional rank (humble rank), before the recent rank revision, was 13k. The new one is 6k.

When I teach Go, the first thing I show on a board, after the intro “Go is a game played between 2 players, black and white, who take turns to place stones on the intersections of the board.” is lay out a little position like so and explain that Go is about surrounding territory and your opponent, and that here black has surrounded 6 points of territory. This is before mentioning liberties and the capture rule. I find this helps avoid beginners become atari and capture obsessed, and realise that most points in a game come from territories not captures (so I don’t use capture go either). Were the people who misunderstand scoring never told anything like this? 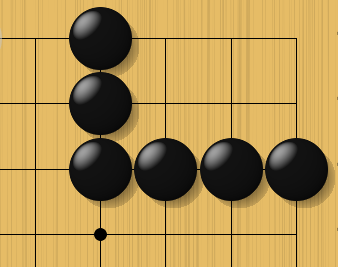 Perhaps it is not working, or I am misunderstanding the term. The provisional rank of new players, which can be seen in the game boards in overview, is 6k.

Humble rank is supposed to be used for match-making for provisional players.

Humble rank = actual rank minus uncertainty. IE it is the lowest rank we think you could be.

IIRC it was implemented for one sort of match making but not another. I don’t recall the details.

The fact that it is not fully implemented means that we still have the problem of very new people being matched against almost-SDKs.

Hmmm - maybe I’m looking at people who joined before the latest system change?

As I understand it, 6k, like the previous 13k, represents the mid-point for our population under Glicko. It is certainly being used for matchmaking, as seen from the discussion in another thread, because new players can’t get games with players weaker than 15k per the 9-stone limit. As you say, it is causing matchmaking problems.

I read on that page a provisional rating 11.9k plus or minus 4.9 but the ongoing game indicates 6k. 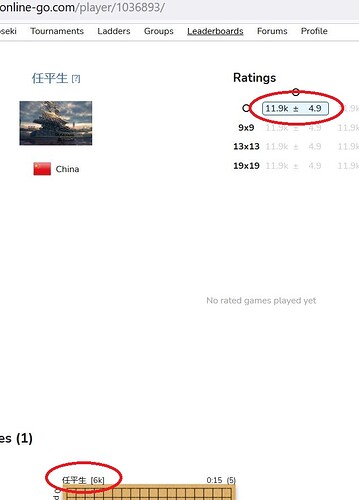 Yes really 12k , guess I will play out all the end game stuff moving forward… but so it goes. Will say then not a fan of the new scoring system

I wonder is that something to do with the way ranks are backward.

That is isn’t it something like ranking stored as X but displayed as 30-X.

That said, in that particular case, that player is also playing ongoing games, and while I feel like the active games keeps updating I feel like you might have to refresh to get the table to update.