Is there a bug in the "marking stone" phase?

As you can see, the bottom left corner seems to be some sort of “seki”, and as white I won the game. However, I don’t think it’s a seki, as I stated it in the revision.

When we were at time of marking stones, the proposal was the seki. I didn’t accept the proposal, as I wrote it in the comment area.
My opponent still thought it was one, and didn’t accept my proposal.
But then, strangely, the game ended with my opponent decision, without me to state upon.

Isn’t there a bug here ? I must also say that it’s not the first time, but the third that a game is ended without my approval (though for the previous ones, I wasn’t totally sure I didn’t accept the dead stones ; in this case I am 100% sure I didn’t…).

Strange ! After I finished this post, I saw that the “top suggested topic” was also mine… It was a year ago (may 2017).
Here it is

Hi, I am white in game #/8350494. The game is finished with “black wins”, except that I should be the winner and black agrees with this (he wrote it in the comments area : “I do not get this, this should be your win ?”). In fact I don’t remember having accepted dead stones. What happened ? Could this be repaired ? Thanks

Someone suggested that it may be because the system thought one of the opponent was a bot.
If this is the reason of this bug, this should be repaired ! The deduction “one is a bot” is obviously wrong in this case because there are two opponents discussing in the chat area…

I’m just somewhere between 9k and 6k but I think you’re right:
https://senseis.xmp.net/?BentFourInTheCorner

In this situations you should call the moderator to determine the status and he will extraordinary finish the game.

The most likely scenario for the previous post you just linked is that i can think of anyway, is because it was a correspondence game you didn’t accept the score with the 24hour limit so it automatically scored the game itself.

As for this game currently you left the corner unfinished with your pass, so black could make it a Ko, granted this doesn’t matter since their aren’t really any threats but it does matter.

Also lastly and this part is important, stop accepting automatic counting and adjust the scoring before clicking accept.

But I don’t accept automatic counting : I’ve played with OGS since 2011, I am fully aware of how this works…
Here when black passed (he was second), the proposal was “seki”, I clicked on the black stones to capture them, then click on “accept” with this capture, while I wrote the message “this is not a seki”.
If I forgot to click on the black stones, this would have finished the game as I was first to pass thus second to accept stones. My opponent surely discarded the capture because he thought this was a seki (as he wrote “try to kill them”).

Finally, I am on this site every day, so the 24 hours delay can’t be the correct reason. See my post I recalled above, in may 2017 my opponent was as surprised as me of the result…

You are mostly correct about the status of black.
As @mk17 mentioned, in case of scoring disputes, please call a moderator

@HowToPlay: this is not a case of blind accept. The opponents did not agree on the status of the group. Technically, they should have played on to settle it, but both regarded the board as finished.

Thanks. There is no scoring dispute really here (as I was the winner in both cases), it’s just that I am surprised of this “computer decisions” that discredits the system : and what if other games were handled the same way…?

Having spent some years in computerizing, I think that there is some kind of bug that should be corrected…

Regardless of the status of the group, or whether or not a moderator should get involved (both are actually irrelevant for this situation since @hdci won regardless), I think the core point of the post was to point out an apparent bug:

This is how I believe the system works:
After player A changes the status of stones, player B then can either accept (finalizing the game) or change the status, which then waits on player A to accept. Player A could then choose to accept or change the status again, which would then wait on player B. This can go back and forth until the players come to agreement, a moderator intervenes, or one of the players times out. If a player times out, then the other players proposal decides the game. I guess if neither players choose to submit, then it just goes with the systems initial determination. For ladder games, it appears that the timeout period is 24 hours from the last change.

@hdci, are you sure you didn’t just time out after your opponent had made the last change?

Although this may be intended behavior of the system, I think the stone removal phase could be handled a bit more cleanly. It’s not very obvious that the system is waiting for your approval after your opponent changes your initial approval. Those games don’t seem to show up when cycling through the “move needed” list and you don’t seem to get any notification that your opponent has rejected your approval. The only indication (if you don’t open the game) is that your name seems to be in bold next to the thumbnail.

Thus, it’s possible for a dishonorable opponent to change the status of stones after your initial proposal and hope that you don’t notice before the approval timer runs out. I believe this happened in a recent game of mine. I was the second to pass, so I marked the stones first. Then, at some point later, my opponent had made a bunch of ridiculous revisions, marking dozens of my territory points as dame. Since, I never got any notification that I needed to approve the changes, and the game did not come up while cycling through the “move needed” list, I assumed that it was still waiting for his approval. I only happened to enter that game again by chance to notice the issues. Then, after I corrected the status, the system eventually used my last proposal since my opponent timed out.

I don’t think its a “bug”, but rather just a bad design choice. There needs to be a notification when a game is waiting for you to approve changed stones, and those games should show up when cycling through the “move needed” list. Also, I would want to see games go into a moderation queue if one player times out during the stone removal phase, rather than just immediately be decided by the last proposal.

Under Japanese rules, L in the corner is dead, no need to play it out. Not sure if “2 moves in the corner force L in corner” are also automatically considered dead, probably not. Play until you get the L shape, then invoke Japanese rules. Or play under Chinese rules so filling your own territory after all dame are filled doesn’t reduce your points and you can safely play out every variation of shenanigans.

since the problem has happened many times，I
think the mark phase need to be improved.
There are four possible cause to the problem:
1.the program defines all stones in chessbord as lived before players make judgements.
2.Those points which connect with both b and w
are defined as something like shared-libs.
3.There isn’t a function to check if all points are colored.
4.There isn’t a function to continue an over game when players disagree the result.
From my experience in other go website I think the program may be improved as follow.

Thanks for this huge analysis.
I can just state that I don’t think I timed out ; I am on the game almost every evening and run through all my active game (when it’s my turn of course, I don’t look much at games where it’s my opponent’s turn)… And pretty sure that I was on it sunday around 11pm, and din’t get any warning about it - and it was this afternoon, thus less than 24 hours after, that I got the “ended game” information.

Maybe it’s really a bug.it is a bug

Perhaps there is a bug. I’m not saying that you must have overlooked it.

However, the current system does make it very easy to overlook when it is your turn to confirm stones, and does not seem to give any notification. I know since I’ve had that almost happen to me. 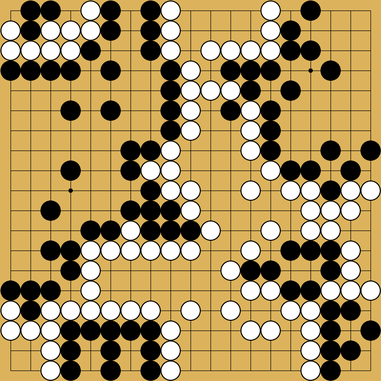 The situation is strange.Maybe you misclick the left b stones as died stones, your opponent doesn’t notice it and accept the notification.