Is there a good resource about the weakness of not following joseki?

Time and time again, I met with opponents who neglected finishing a joseki in favor of tenuki or modified the joseki to be more greedy (eg. 2-space jump instead of 1-space jump). Now, I’m sure joseki is the way it is for a reason, so there must be a good reason why finishing the joseki or being not greedy is in one’s best interest. In other words, deviating from joseki will undoubtedly create some sort of weakness somewhere (at least for amateurs like us). The problem is that, for a puny kyu player like me, most of the time it is too hard to find that weakness, and we ended up unable to take any advantage of our opponent’s greediness.

I’ve googled for a bit but only found a bit of this and that, nothing truly comprehensive. It’d be great if anyone can refer me a book/link/video/anything which examine this issue deeply. Thanks in advance.

On the Smartgo Books site I’ve seen a book called Punishing and Correcting Joseki Mistakes, but I don’t know much about it. Its intended audience seems to be well above my level.

Thank you. Unfortunately, it seems Smartgo Books can’t be downloaded on Android and I don’t own any Apple device

The trick (disclaimer: I am only SDK, so take this with a grain of salt) is to figure out why the joseki move is played. Is the joseki move meant to complete shape? or maybe to avoid being enclosed? If your opponent deviates, try to punish based on the aspect of the joseki they missed.

If they don’t play a move to get out, enclose. If they omit a shape move, poke at the shape. Play around with the sequences in a review. After some practice, you’ll start to see results in your games.

EDIT: There is a chapter in Lessons on the Fundamentals of Go titled How to Study Joseki that would be helpful for this type of study.

Yeah, they are in no hurry releasing the Android client (it’s “in development” for quite a while)… and a PC client they don’t even promise.

Well, I’ll probably resort to that sooner or later. It’s just the difference between that and learning from a book/something is perhaps akin to learning go rules by watching people play versus getting taught the rules by someone (aka much slower).

By the way, I already read Lessons on the Fundamentals of Go but this seems to be a good time to read it again. Thanks for the suggestion.

In cases like these, no teacher will be able to cover all of the possible deviations. Learning the reason for the moves will make you much stronger in the long run, but it is a much slower process.

The problem with the question is it is based on incorrect comprehension of joseki.

Joseki are not “correct moves”. Joseki are the results of pro research and they are subject to trend and taste very much like fashion.

There are many joseki that got played by pro over and over again for hundreds of years, and then suddenly someone found a new variation that yield a terrible result for one side. From that point on that joseki simply disappear from pro’s records. Does that mean amateur has to forsake that joseki as well? No, because our ability is simply not enough to make use of such a small difference in gain.

The same thing applies to amateurish deviations. Was your opponent in the wrong for not playing a well-known joseki move? No, he played a move he thought to be completely fine, and want to see how it goes. If it goes bad he now knows why it’s bad. If it goes great and he win the game because of that, well, who to blame but yourself? How do you know he didn’t just create a new joseki that pros haven’t thought of yet? (j/k)

From my own belief your opponents who deviated from joseki are actually very active in studying joseki, instead of simply remembering it. That’s how we all get stronger.

I agree that joseki are not “correct moves” and subject to trend and taste. However for kyu players like me, I’m pretty sure if we deviate from joseki we don’t have the skill to back it up (aka it only works because the opponent also sucks). To be honest once in a while I deviate from joseki as well, to see what would happen. But 99% of the time I don’t get punished whatsoever. Sure, I can try doing that over and over again, but wouldn’t I develop bad habit if I keep making those greedy moves for a prolonged period of time?

The best way to find out why a move is greedy is to play it against a stronger player, then review why they creamed you afterward! So long as you eventually get into circles where your overplay is consistently punished, you’ll probably not make a habit of overplaying.

If any bad habits are forming, I’d argue the worst we can get into is to stick so absolutely to what we’re comfortable with that we never experiment. Doing so can refine the skills we have, but we’ll never gain any new skills, either, and eventually we’ll reach the limit of our ability

I haven’t seen any books about it either, specifically, though maybe the books on joseki will explain more the reason for each move. such as this book 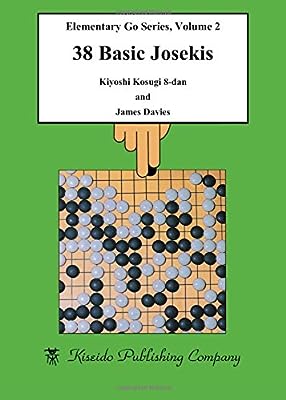 In the game of go, the opening moves focus on the corners of the board. Over the thousands of years of go playing, this aspect of the game has been intensively studied and a large number of opening fo ...

what i usually do though, as others have said, is if the opponent makes an unexpected move i see what would happen if I play where he ‘should have’ played. then try to imagine what exactly that move was for. what was it preventing?

Sadly this book (38 basic joseki) is a bit outdated now, i still hope a new one to be published one day!