Is there a reference for go rules in OGS documentation?

I was in a game recently where there was a difference of opinion about a seki. I could see from the game information that we were playing Japanese rules and wanted to see if my view was correct. I couldn’t find a rule set in the documentation, though I may have been looking in the wrong place. Would it perhaps be helpful to include in the documentationn the various rulesets for which the site allows games? Ideally one would like to be able to click on the “rules” entry in the game information (e.g. on “Japanese” or “Chinese”) and go straight to the rules in question.

Links to Sensei’s library pages would do I guess

I actually like this suggestions, especially making the rules a clickable link.

I guess the issue with linking to Senseis library is that anyone can edit it or restructure it for a different purpose than linking to it from OGS would serve. It could also include a bunch of superfluous information in theory, while the OGS docs could be kept as minimal and focused as needed.

Pages on Sensei’s can be locked to mod-only editing, like the RGG FAQ.

So there could be a particular series of marked “OGS rule pages” that would be denied general editing access.

However, at that point why not just host the information on-site?

Here are the relevant SL pages if you’re interested:

I sadly didn’t find any R. Jasiek account (or variants) on OGS. With his expertise on the rules we could get a well summerized compendium to integrate in our FAQ

I sadly didn’t find any R. Jasiek account (or variants) on OGS.

If you want to study go rules in general this might be helpful:
https://lightvector.github.io/KataGo/rules.html

If you want to know how OGS rules work or something official to refer to when there’s a dispute in your OGS games then i don’t know.

By the way I just run into a similar situation today. 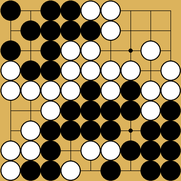 G1 and G3 shouldn’t be counted as black’s points in the true Japanese rules.

G1 and G3 shouldn’t be counted as black’s points in the true Japanese rules.

But isn’t that down to the players to mark the board properly before agreeing the score?

It would be good for OGS to have its own documentation about its implementation of the various rulesets rather then simply linking to SL, because Japanese rules on OGS are not real Japanese rules as they is no support for the dispute resolution phase of the game. Instead the documentation should make clear what you should do in such situations, is it call a moderator (what if your time runs out before mod arrives? What if mod doesn’t understand Japanese rules?), resume and play it out (bad as costly in Japanese rules, if you are so far ahead you can lose some points and still win maybe acceptable, but unacceptable if a close game and would turn a win into a loss), resign the game and contact a mod afterwards, let your time run out as engage in a fruitless debate with your opponent about how Japanese rules should work?

We have this Play Go at online-go.com! | OGS but its not explaining much

How did you find that? I think I’ve seen it before, but couldn’t find it by following links. An easy to find link from rules panel to that would at least help OP confirm no points in seki (if you understand what “Dame negates territory of adjacent strings” means, would be improved by adding “i.e. no points in seki” or rephrasing to “points in seki” but it’s trying to make clear the point that in strict Japanese rules leaving dame unfilled between what you normally think of alive groups turns them into non-territory scoring sekis.

tbh i cant remember anymore how to find that via main site, i have just linked it so many times for people asking about ogs rule implementation, that it is the first thing my browser suggests when i type ‘rules’ into the address bar xD

By the way, for dummies like me who never thought to ask, the “SST” in Ing SST Rules stands for Stones + Spaces = Territory.

As far as I know, OGS does not implement most rulesets completely correctly, because most rulesets allow drawn games, and there’s a longstanding OGS bug which prevents draws. (I think Ing rules don’t provide for draws - but maybe someone can correct me on this.) For example in Japanese rules, triple ko and other positions which allow infinite repetition are draws if neither player chooses to back off.

So a reference to Sensei’s won’t do because OGS in effect has its own rules, different from the standard rulesets.

I dunno now but triple ko didnt traditionally result as a draw but as a loss for both players. It was a sign of misfortune coming around too, so not really a result players wanted to reach.

OGS rules problems are mostly around japanese rules, and that’s seems logical because of the nature of the rule itself.
Players still chose them in a large majority because they care more of the simplicity to evaluate territories during the game (count only the emptyness less prisoners) as all the difficulties and rituals on the side. Well besides this, Japan was our primary sensei and japanese rules are the default on OGS.
OFC it’s more my opinion as irrefutable proofs.

Now to implement these japanese rules seems to be a real challenge, if you include the howto finish a game, all the special cases, the use of admins… The forum has many topics on these already.

in Japanese rules, triple ko and other positions which allow infinite repetition are draws if neither player chooses to back off.

In modern times, it would count as no result, so annullment (not really a draw/jigo).

But does OGS do this automatically? I’ve never had one!

No worry, almost noone more as 12k had one.
I say above 12k because it’s very common for less strong players to think they got a triple ko in their games, when it wasn’t really a triple ko.

The day a triple ko happens on OGS, it will surely be an enjoyment for an admin to supervise it.