Is there any advantage to be gained by playing a computer?

I’d not call myself experienced, but …

Some never play computers. There are many ways to study and improve that do not involve computers.

I play online with bots, offline with AIs (one I wrote based on an existing program), played online with other players, and played over a board. I feel all of this has helped my game.

As to recommendation, most feel you shouldn’t play most of your games against programs as most programs have weaknesses that most human players will eventually find and exploit. This can lead to unbalanced play when playing other humans.

I hope that helps until a truly experienced player adds their input.

(weak) computer go software may give you wrong ideas on what is the game and how to play and win. These can generate bad habits, and bad habits are one of the most difficult thing to get rid off when you’ll be stronger at go.
This doesnt apply for the strong new go bots like 4d+ who have a decent way of playing

I think there is also things to learn from computers, they usually make pretty solid moves which might be helpful to beginners especially. But playing with computers only can make one soft… and uncreative in time… But as @Traveller pointed out its entirely personal thing… I believe balance between computer and human games is the best solution…

I’d say as much as you want, as long as you choose a decent program (like Zen or Crazy Stone).

I’ve never got a game reviewed by a computer

I am using the latest Crazy Stone version to review my games. It is very helpful to assess who has the upper hand in a given position, but going through a couple variations is very tedious.

The advantage is that it is always available when I need it, and less expensive than a teacher.

I’ve never had nice side chat with a computer.

They are good listeners though.

I beg to disagree, and I think pros said exactly the opposite. See Fan Hui’s presentation for example, or the recent AlphaGo games. This might have been true a couple years ago, not anymore.

Personally, I think anyone and anything that keeps beating you can teach you somethig.
Sure, if you have a dan player at your disposal who is willing to teach you, then great. But if you don’t playing against computer is better than watching the wall. Sure computers have usually some weakness - just as weaker human players.

I think it can be easily summarized to: Play against humans if you can (they are more fun anyway). And play against computer if no human is avilable.

I for example have an android app which I play against when I am on the bus or so. And although it is probably nowhere near dan level it still taught me something…

I am sure that programs can teach a lot. If you have fun playing AI you should do it!

My main problem with them is an entirely different one. For some reason

, i have a really hard time giving any real effort when playing a program. I had the same issue when i played chess… just played leagues worse against computers than i knew i could against humans. It doesnt feel the same to me. Since I dont have fun playing games in which i cant get myself to at least give a good try nor do i think i will improve that way, i stopped playing against AI entirely.
Maybe thats weird? Well… its how it is

Interestingly enough i have no problem doing tsumego for hours

, i have a really hard time giving any real effort when playing a program.

I had the same problem. Most of my games against a program were against GNU Go, and I would never spend as much time thinking about my moves as I would against a real person on a go server. I think part of the reason is how fast the computer would usually respond; I sometimes find that when my opponent consistently responds quickly without thinking online, I also start playing fast without thinking. Maybe if I had used Byo yomi while playing against GNU Go I would have used my allotted time to think about my moves, but the games were always untimed.

I believe the key to improving by playing games is to spend time thinking about your moves, and once you have your 50 to 100 games under your belt, to review your games afterwards. Playing without thinking is a form of practice, but not the deliberate practice that causes you to improve. Perhaps some have an easier time than others achieving this deliberate practice by playing against AIs.

I think computer sometimes make moves that human can’t use. Such move has no idea, it just has more chances in simulation. So if you will try to use it, you will play worse.

I did actually. Pretty good but still… Try playing a ‘Hai’ or Hai with one space jump, it doesn’t stop playing until it does the last move and end up losing the game. One of the biggest flows i found… Anyway, I’m getting out of subject…

its just a personal opinion… [quote=“Adam3141, post:11, topic:7259”]
Personally, I think anyone and anything that keeps beating you can teach you somethig.
Sure, if you have a dan player at your disposal who is willing to teach you, then great. But if you don’t playing against computer is better than watching the wall. Sure computers have usually some weakness - just as weaker human players.

I think it can be easily summarized to: Play against humans if you can (they are more fun anyway). And play against computer if no human is avilable.
[/quote]

I totaly agree with you…

Try playing a ‘Hai’ or Hai with one space jump, it doesn’t stop playing until it does the last move and end up losing the game.

No idea what you mean by Hai, but I’ll believe it when I see it! How about we start a correspondence game, you take black and I’ll run Crazy Stone on the white side?

It’s kinda hard to explain it and recreate as well. I searched for the right translation online but couldn’t find anything exact… When i have time I will try to extract a few sgf files from Crazy Stone where this situation occured and send it to you which might be the best way to explain…

As I said on another strand, playing the computer is helpful if you have never played online and want to get comfortable with it before confronting a human. Also, it is a good way to get used to time controls without investing your ego in the game.

• I’ve never got a game reviewed by a computer.

I this case, your bot got a really crappy GUI that wont allow you to play different moves or ask for variations.

For example, Pachi + goGui (enz, please, continue with development!) give awesome “reviews”. You can click “Best moves for *” and this is what you get. 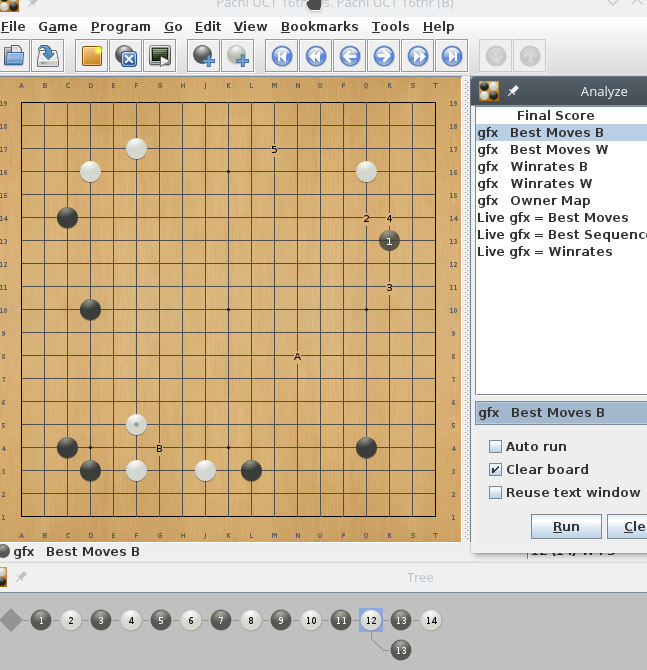 A - where B 13 is in real game
B - variation
1 - 5 other possible moves that become variations if you play any of them and then it shows you B and W moves it considers a good idea.

There is one “problem” - it’s way too strong and “thinks”/reads way too deep so it gets confusing (too complicated) after few moves. Then you can just propose your own moves and it recalculates the rest of the “review”.

Of course it’s not perfect but gives you interesting ideas for few moves and then, as mentioned before, it usually gets too complicated for my level.

Any simple instructions on how to install for the technically challenged?