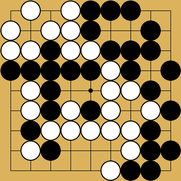 @mark5000 answered for move 45, but the question is actually for move 40, which is a lot more complicated (I don’t have a clear answer, I think it’s alive starting at C3).

I posted a variation after move 34.

mark just didn’t post anything pre-45 because there’s nothing wrong with black 41 and 43.

Actually there is. Black 41 is met with white C3.

No, there isn’t, because everything else rather trivially dies. This is b’s best shot.

I don’t see anything trivial after black C3. White needs to think about its own group.

Not trivial for 15k, no. That’s correct. In that respect, probably all kills require dan level reading.

And if there’s life for black, it requires smurph+1 level reading.

everything else rather trivially dies.

I’ll say it again, after black C3 white has no trivial way to kill.

In the variation you posted, I would play black B2 instead of A3. But again, as white I’d rather play C3 than B4.

Update: I posted two more variations, and at this point I’ll stick to my conclusion that black lives with C3, and cannot live unconditionally with B3.

Disclaimer: for the two variations, I used Leela Zero to drive me through some of the sequences. LZ is not meant to run on 9x9 or resolve life and death problems, but it seemed to provide some useful guidance here.

oh btw I just noticed the OP’s biggest mistake… in the title of this thread!