Is this a seki or not? 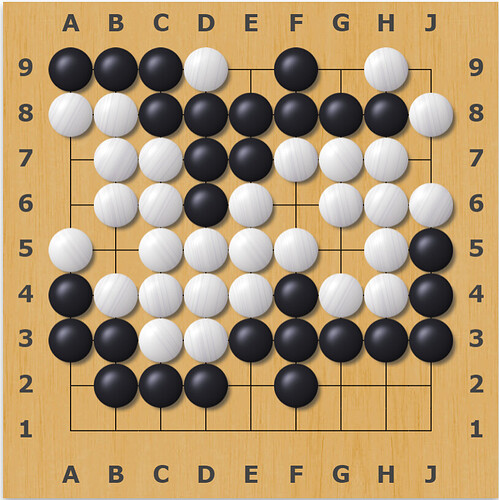 this is the end of the game I accept the lost because I wasn’t sure but I saw somthing about a false eye doesn’t it like that on J9 ?
I think it is a false eye seki plz correct me if I am wrong

It’s dead actually, Black cannot play G9 at any moment, since it is the second to last liberty. Meanwhile, White can connect both J7 and J9 and then play G9 and E9 to capture.

Also, note that White needs to play four moves to actually capture the group: these are moves inside of White territory (since the Black group is dead). Under the Japanese ruleset White does not have to actually play these four moves, since it would lose White 4 points.

Here’s a general tip for spotting seki. If the surrounding (White) groups of a (Black) group all have two eyes, then it’s never seki. In that case either Black has two eyes and is alive, or Black doesn’t and is dead.

Applied on this board position, there is only a single White group surrounding the Black stones, and they clearly have two eyes (four even).

thank You very much ! really help me alot I didn’t notice