Is this alternative move in puzzle really incorrect? 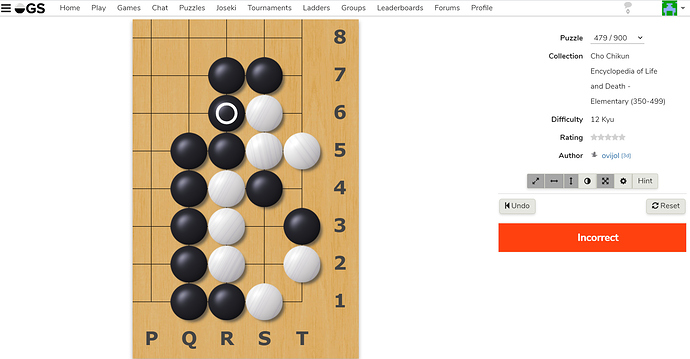 I played the marked stone as my second move, instead of at S2. I think White is dead either way, but isn’t connecting on the outside likely the better move? [ Not sure how to define “better” here, it could depend on the situation on the rest of the board ]

Just a speculation …
Both S2 and R6 kill the white group.
The advantage of S2 is that it directly kills white, while R6 leaves some aji. Think about white S3 in a ko fight. Black has to respond or lose a lot of points.
So S2 is a better move than R6.
That is why R6 is considered incorrect.

Think about white S3 in a ko fight.

White still has S3 as a ko threat even after Black plays S2 instead of R6. My feeling is that R6 leaves less aji, for example there is no peep at Q6.

With S2 you could decide to ignore the peep and go for bigger fish.

The difference is that the large black group is “very safe”, inasmuch as it can capture 3 stones at any time. But on the other hand my connecting move leaves no outside weakness. It’s true that if the connected black group didn’t have two eyes and had few liberties left, white playing S2 could be a threat. But that seems relatively unlikely, in practical play black’s large connected group will probably live on it’s own.

In my opinion, the discussion which move is better should be irrelevant. Clearly that is not the point of the puzzle. In that case both moves should be correct. Maybe you could contact the owner of the puzzle and tell them?

The design behind the answers is probably to demonstrate knowledge of the throw-in. I would simply alter the design slightly to force the throw-in; just give white a couple extra external liberties.

could contact the owner of the puzzle and tell them?

In the introduction to the cho chikun puzzles ovijol does say

"For long lines, there might be lines that are essentially the same as those marked as correct but incorrectly marked as incorrect. I try my best to avoid them but please be patient!

Feel free to message me on any mistakes on the puzzles. (Please turn off color and side swapping by unchecking the boxes in the gear icon. This will help in reporting)"