So I finished a live (9x9) game and reviewed it with AI. Then I realized it has the same opening as an ongoing correspondence game I’m playing. The correspondence game is now at move 3, so, due to the nature of 9x9, AI review may change the game a lot. Is this cheating?

I’m inclined to say it’s not. My correspondence game opponent is on a vacation of two months… If that’s cheating then I’m not allowed to study the opening in two months… What do you think? And more generally, what’s the line here?

Nice dilemma.
The fact that you link the situation to cheating is telling me a lot. You have doubts about it. And so would I. Studying an opening with all its variants and then deciding for yourself which scenario to follow is just a little bit different than meekly following AI-suggestions.
Well, just my two cents.

Millions of games can result from the same first 3 moves, even if you know the AI line, I would regard it as almost impossible for you to guide your opponent down the exact same line…

In my opinion it was an honest mistake, if even a mistake at all, and would not be cheating unless you continued to analyse the ongoing game as new moves are added.

First 3 moves are overwhelmingly well within the grounds of “known and pre-planned fuseki” which you could just as easily have planned from a book or an online 9x9 guide as you could have from AI.

IMVHO, I would not consider it cheating.

I don’t think it’s valid to expect the rest of your Go knowledge to be put on hold; for example, if you watched a pro game and the opening were the same as one of your corr games, you wouldn’t be expected to give up the game, right?

I always correlate cheating with intention, so my line is “Do I deliberately do this to gain an advantage?”.

In your case I would also ask “Is this thing that maybe gives me an advantage in a void?” As in, even accidentally, is it something that came up that gives you an advantage and isn’t connected to other aspects of your game/ life?
Since it is part of your studying, I would say the answer here is “No”, and as we can’t expect to basically go into a disadvantage (essentially hinter your studying) to avoid cheating, my general life opinion would be it’s not cheating, and you can go on as you please.

Another scenario: I finished a live 9x9 game. I want to review it using AI but I know the first few moves are the same as a correspondence game I’m in and the game is now on my turn. Is it cheating?

Oh well I guess the game is now on my turn is clearly cheating. Let’s say it’s my opponent’s turn.

I’m actually in such a situation.
This is a game I played on GoQuest today 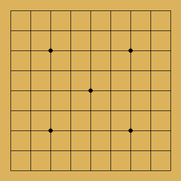 This is a correspondence game I’m in 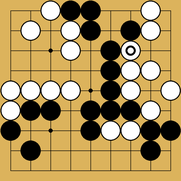 I’m white in both games.

You better wait before checking the old game with an AI. Studying the position meanwhile may be fruitful.

“Do I deliberately do this to gain an advantage?”.

Doesn’t this open the door to abuse?

I think the line is blurry here. I would never do this, and I would be slightly annoyed if I knew my opponent did.

That being said, it is impossible to regulate and one of those things you have to accept when playing go online.

There is a huge difference between studying with or without AI. You can use AI in different ways of course, but ultimately it gives you the right move (or moves) no matter how you frame it.

If we are not honest with ourselves, the door is wide open to cheating anyway.

For example, if you play X move and opponent responds with Y move that you hadn’t thought, then in your game where your opponent played X move (rest of the goban is coincidentally the same) you get to play Y move, because you can’t unsee how right it is now.

I understand the issue here is AI, but what about reviewing the game with a stronger player (which I understand it’s a bit rare in our OP’s case

) who would also explain the if’s and what’s of certain moves, that AI doesn’t do. In my eyes, actual teaching would be more “cheating” in this case.

However, keeping in mind all that I have mentioned this far, when I’m in doubt that I should do/ keep something, however vague the advantage is and even if nobody knows, unless it hurts me in some way, I let it go.

So, if it takes away from your enjoyment, although it is not technically cheating, maybe don’t review that game. However, don’t paint yourself in a corner and end up restricting here and there because there is some corr game that might give an advantage.

Life doesn’t work that way and realistically you will play games, study and come upon new things every day.

AI raises the blood pressure when mentioned in relation to Go, and IMHO it leads to some overreactions. If you had framed the question “Can I study my game with 5 pros in a cave with no power for 2 months?”, I suspect some would not see it equal to cheating, because for some reason AI is always cheating.

just never play correspondence and there will be no dilemma

what if you have ongoing correspondence games with a lot of 3-3 invasions? And new games keep having it? Then you should never study 3-3 invasions from the books??? Never test different 3-3 positions with AI???

You are practically asking if it is ok to use something new you learned by reviewing another of your own games.
Ergo: NOT cheating.

The only advice prohibited in correspondence games is live advice from people and the use of AI analysis. In your case, what you learned form AI was not specific to your game, nor something you sought for the sake of your game. As you say, it was just part of your ongoing learning. I see nothing wrong here. Personally, I play correspondence because I want to play the best game I can, without time pressure and memory blunders. I don’t want to lose or win a game based on those factors. I try to play opponents who feel the same way.

No cheating in corr games cause they are not real games.

I feel this is unavoidable, especially with smaller boards because the options for opening moves are highly limited. On 9x9 there’s basically only 6 possible opening moves to even consider (unless you open on 1st or 2nd line, which is something you probably ~never do if you’re above 24k)

As someone who always have tens of ongoing corrs in all phases of the game, i notice that i’m constantly reviewing finished games with the same early board positions than other games i have ongoing. Its just impossible to avoid this unless you either 1) never review your games, or 2) play totally random moves without any kinda purpose.

I generally avoid correspondence games but I also want to climb the ladder. Another dilemma.

just never play correspondence and there will be no dilemma

You are definitely correct for 19x19 games. But at the start of 9x9 games, there are dramatically fewer overall strategies available. It is one thing to study beginning-game 9x9 moves in isolation, and it is likely to improve your rank, but if you have had specific advice (AI or not) for the same first few moves, that does raise a question. Unfortunately, the rules of go do not include the possibility of both players abandoning the game, so it’s an interesting issue.

Please explain why corr games are not “real”. I never knew this. Are they not counted to compute your rank? Are they not recorded in your profile? Or are they unreal in some other way?

In the cheating content, many of us study, so if I play a joseki, I naturally have an interest to study it and am not going to purposely wait for the finish of this game, cause this is the best timing to learn and enforce memory. So if one wants to call me cheat, that’s totally fine, cause I never treat corr games as real. But I wouldn’t look up a book while playing a live game

It’s interesting, my point of view is exactly opposite. The only true game is one without a time limit.