Is this shape alive?

hi im new here. can someone tell me if this shape is alive? white is surrounded by black and this is the only eye space. 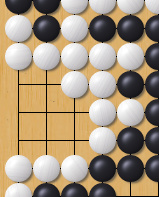 according to https://senseis.xmp.net/?BasicLiveShapes#toc5 8 points are alive, but if black plays first, i cant find a way to make 2 eyes.

according to https://senseis.xmp.net/?BasicLiveShapes#toc5 8 points are alive

That comment only applies to “connected” eye-shapes. As long as part of the group can be cut-off the situation may of course be different

i cant find a way to make 2 eyes

I think white is

The few variations that I have tried led to seki. But I’m not very good at this.

I tried to kill, but did’n find a way: I only managed to seki.

Recently I discovered to be expecially weak at tsumego and similar situations, so I’d like to see some variations too.

Left a review with my ideas. But I encourage everyone to first try to solve for themselves 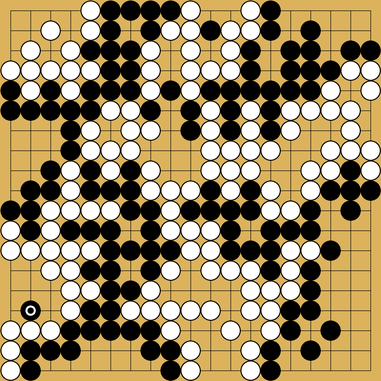 @ lysnew: At least we are good at judging our own competence!

As you say but it’s only dead if black plays first. Black didn’t. Nor did White reinforce the position. If a position is left in an unsettled state then I assume it is judged alive for scoring?

i believe that (the japanese) rules state that once both players agree to a result, it can not be overturned.
somewhat of a strange exception is the case, where both players pass and afterwards find a move that would change the game result. should that happen both players lose

EDIT: chinese rules are that all stones in unsettled positions are to be treated as alive.

well then im lucky that my opponent did not kill it, otherwise thats a big point lost!

I don’t see the death…
if black plays first, I only find either seki or ko (favorable to white)

Then you need to go deeper.

So technically the answer to a question "Is this SHAPE alive’ would be ‘yes’, as given enough outside liberties that IS a seki. Only by checking the game and finding out the lower group has already run out of liberties you can conclude the opposite, but that’s answers a different question altogether

And given enough empty intersections beyond the borders of territory, Lee Sedol won all games versus AlphaGo.

It was asked twice, in fact. Once in the title and a second time in the first post, albeit indirectly with respect to the latter (the direct question is if there is someone who could tell him, to which the direct but facetious answer would have been “Yes.”). OP further specified the conditions under which he questions the vitality of this shape: if, and I quote, “white is surrounded by black and this is the only eye space”. He further specified that “If black plays first, [he] can’t find a way to make 2 eyes” (grammar redacted). Therefore we are working under the assumption that the shape in fact has no outer liberties and that black plays first, therefore the only valid answer to the given question in the given context is the one I provided (aside from the more direct but facetious answer “No.”).

If white moves first he can live, if black moves first, the status depends on external liberties, leading to either seki or death.

I’m not saying there wasn’t room to wilfully misinterpret OP’s statements, but I was under the impression that you didn’t want to answer a question that wasn’t asked.

Of course ironically the resolution to the confusion lies in the referenced senseis article, where the preamble reads “The discussions on living eye shapes assume that the group is surrounded. Corner shapes often behave differently.” Now this is not a corner shape (so the caveat should be extended), but rather a margin shape because the empty intersections are not themselves completely surrounded by a contiguous group of white stones.

Furthermore, white could be completely “surrounded in the sense of having a string of black stones preventing it from connecting with other white stones or other margins of the board, but with shared liberties” by an eyeless or otherwise not-2-eyes-possessing black group, leading to a semeai. In that case there is no other eyespace either, despite the shared liberties, so it’s not a redundant statement.