Hello. Why does it allways take chinese rules when I Play against Computer Fuego Engine? Usually I Play Japanese Rules, so that Stones on Board don’t Count. I choose Japanese Rules on Settings, but it doesn’t work I guess. I don’t understand Chinese Rules actually.

Hello, unfortunately almost all bots only play under Chinese rules (I hear it is easier to program, but might be something else…). Ideally, the UI should reflect this, yes, (hopefully it will in the future).

However, the result (victory/loss) should be mostly the same (unless something special happened in the game). So it should not matter too much.

And just to provide all information, the main differences are
In Chinese rules: 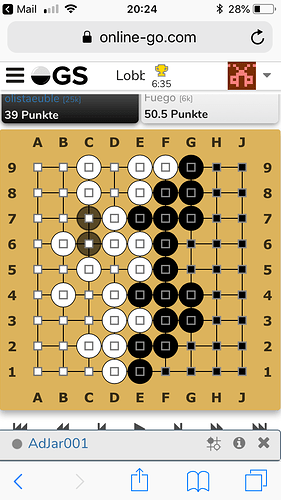 Okay thanks. But check out this result: with japanese rules i would have won. I don‘t even get how he scored more than 50 points?

Why do you think black would win under Japanese rules?

White has a bigger territory + komi. I do not see what you mean. White got to 50 because, as I said earlier, in Chinese rules one counts both the stones and the territory they surround. + white got komi and +3 compensation for each handicap stone.

While the numbers would be lower in Japanese rules, the difference will be almost the same and AFAI can see white would still comfortably win.

Also (and it is just my personal opinion) I would caution against playing bots only as a beginner.

While I like bots and enjoy an occasional beating, I think, it is much easier and more fun to get started off with humans. Unlike bots we can explain some of the very basic ideas (in a good teaching game), and with a reasonably paired opponent, you might enjoy a well balanced and challenging game. Getting destroyed by robots can get a little depressing sometimes

but each to his own, just wanted to say that if you wanted we have many friendly “faces” here who would be happy to play with you

Okay you‘re right. Black has 23 Points (-2 from capture), while white has 24 Points. But I think that I with black also captured a couple of white stones… that‘s why I thought black would win?

Actually do captured stones not count in chinese rules, because I‘m quite sure I captured a few?

No, in Chinese rules, captures themselves are worth nothing.

Black captured 1 stone in that game.
white has 6 prisoners (incl. the two left on the board)

Okay thanks. So I think the result would be 17:28 for white with japanese rules. I do play against humans when i find time.

It’s probably assuring to know that the difference in score between Chinese and Japanese rules is generally zero: most games result in the same score. There are occasions where it is different, but they are quite rare if both players play sensibly. See this sensei’s article as well. 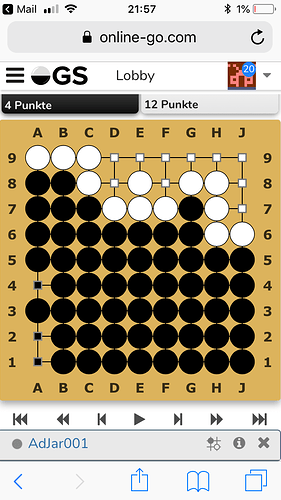 In this game i played years ago it differed a lot though.

if both players play sensibly

If you just needlessly fill your territory with the other player passing, the result will differ.

Actually do captured stones not count in chinese rules, because I‘m quite sure I captured a few?

Note that in Chinese rules if you capture a stone, that is one less point your opponent will get when he is counting his stones for score, so yes captured stones do count, just not in the same way.