Hello. This might have been answered already but id appreciate if someone can help

In Japanese scoring is there actually a point underneath stones played? If this is true, then dame points would actually count as 2 points? thanks

No, you don’t get a point for your stones played.

In Japanese scoring, there are no points for dame, and you lose points by playing in your own territory.

In Japanese counting you don’t count stones only emptyness. It makes sense if you consider we have played same Quantity of stones each, so we can forget them.
Because of “same quantity” we will have to put back the prisoners and arrange things in some weird positions. 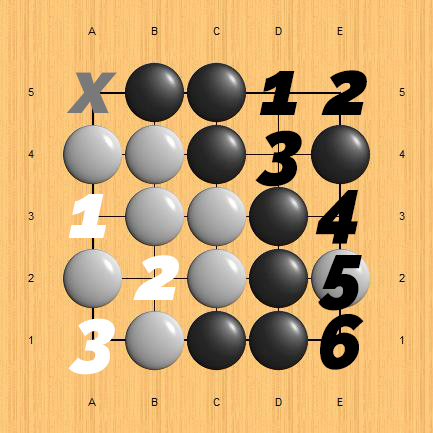 If it’s on real board, captured stones are placed into ones territory after passes and stone removal, so here black has 6 and white has 3-1=2 points of territory. Result is the same b+4, of course, but for counting purpose it might make sense to think dead stones as negative points for the player who has played the stones, instead thinking them as points for the player who has killed them.