Ke Jie vs. Park Junghwan: Tournament Game of the Week

Based on the half-dozen games I’ve looked at, here’s my game of the week (Month? Season? Year? It’s a good one !): 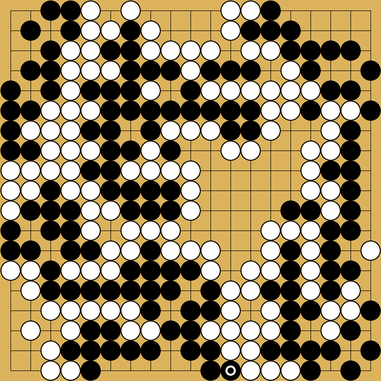 The game is Ke Jie vs. Park Junghwan in the semi-finals of the Chunlan Cup.

Not only is the game Ke Jie vs Park Junghwan, possibly the greatest two players of the current generation, but it’s very much a clash of styles. Ke Jie champions the ultra modern take the territory/hit the 3-3s/invade the resulting influence super severely computer inspired approach to the game. Park Junghwan, on the other hand, says “bring it”, and goes all-in on influence! He hits a single 3-3, but only after playing an approach, and then turns the corner into a ko (Park Junghwan likes his ko fights, I’ve noticed!), which he then gives up to profit in the center.

Park Junghwan wins by half a point, which is significant because:

Thanks! It was relayed on twitch too, I haven’t had a chance to watch it yet.

Whoops! I read the “runner-up” column as the winner on Go4Go.