Keep your hands off of my moyo!

I had this game on IGS. I played blacks 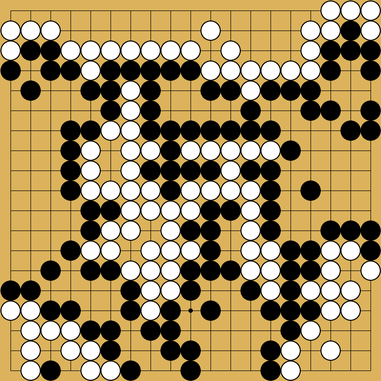 
I tried to get influence on center and be annoying on the corners.
Everything went fine, until turn 126 when my opponent invaded my beautiful moyo. 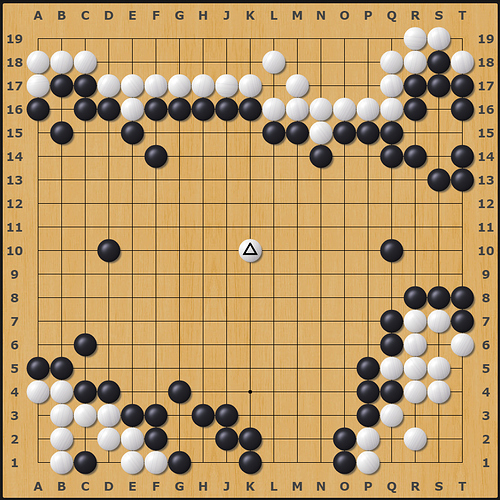 image.jpg914×913 431 KB
I couldn’t stop it.
How could I prevent this kind of invasion?
How should I have approached this damned 126th move?

Practice the Shape Game against strong opponents. Ignore the discussion on that page, it’s irrelevant.

Back when that was written, the concensus appeared to be “undecided”.

I wonder if AlphaGo clones could answer the question?

Are you sure you’re replying to my post here?

Play there on the previous move.

Yes, why do you ask?

I clicked on your link, and on that page are people discussing whether or not white can live on a board with black walls around the edges.

They appear conflicted. It was written in 2016. So I wondered what AlphaGo would say about it.

That’s completely irrelevant. What’s relevant is that I’m telling OP he should play that variant of the shape game against a strong opponent to practice shinogi and anti-shinogi tactics.

Just in case that wasn’t obvious enough, I’ve added that part to the sentence in my original reply.

Sure, that was obvious and didn’t need spelling out. Your advice to them was good, and stood on its own.

Not really shinogi concept here as:
Shinogi is more used on defense side as offense
It usually is more used in the sense of art of escaping in the less damaging way which is far away from the exercise theme (no exit at all there).

“This technique can be part of a strategy, referred to as shinogi -strategy or amashi, where you take territory and let your opponent make a huge moyo, which you hope is big enough for you to live in.”

Since the OP is not concerned with the shinogi/amashi strategy (whose definition the game seems to satisfy, considering black ostensibly got the huge territory he wanted and which white hoped was big enough for him to live in), I refer to the actual attempt to make life (and for black, to kill) as shinogi/amashi (anti-shinogi) tactics.

Shinogi has no relationship with the exercise you offer him.
It may have some with the OP of course even if it was not what it was asking for as he just wanted to learn to kill
What the concept of shinogi brings more (escaping, not doing damage around and so on… ) To the concept of killing is interesting but not relevant so much of the OP and even more of the exercise you proposed.

Sabaki as the art to make shape without that dimension of escape could be a bit more relevant although I feel that a bit useless too, like my own tendency to put Japanese terms as often as possible like it would be more poetic.
Why not just say “kill”?

To come back to the game for killing you should avoid contact moves like the first one you played, heavy shape like the empty triangle you played, to let your opponent sacrifice stone(s) to make shape, to let him make ko… In this game you really helped a lot him to make life indeed.
In the search of a kill you need to draw the potential eyes he could do, according to the space available, the threats in your surrounding formation he could use to get more space ( Here almost no threat at all). In such a game like yours you can just focuse to be where he would need to be to form the eyes, adding one stone to prevent the complete formation of an eye and ensure that your stone is connected to your walls around. Often we use sacrifice stone to oblige to fill the eye itself. And remember that you can let your opponent make 1 eye as this won’t be enough to live.

In short as previous posts said you need still a lot of practice, and for that play/review games and if you like it, a few easy life and death problems
Did I say tsumego? No I didn’t!

This is a fight where you should have the advantage, as the area is already entirely walled. In this context, attaching and hane-ing your opponent should be avoided - you want to stay strong and not create any weaknesses for your opponent to attack.

It does get some getting used to. The main thing to realize is that most of the usual proverbs (for example, respond to attachment with hane) do NOT apply when the opponent is invading your territory - mostly you just want to stay strong and wait for your opponent to kill himself as he has nowhere to run to.

my opponent invaded my beautiful moyo

I wouldn’t call the center area a “black moyo”, even if completely surrounded: it’s so huge and completely void.

Spending few moves in the middle while your opponent is still under pressure.
As an example, move 125 was very small. Move 123 was useless (but white answered locally, so no big deal). Move 119 is worth few points. You also could exchange move 113 (worth 10 points) with a move in the middle that would be more valuable.
All this in order to secure a huge (way too wide!) moyo.

But my other advice is: why secure that moyo?
White invaded successfully, but gained just four points of territory. Yes, it’s a big reduction of black’s territory, worth maybe 80 points… and anyway black won by more than 40 points.
What would you like to get with this game? A 120 points victory? That isn’t Go, that is greed.

It happens often in DDK games to have an outcome of 60, 80 points difference or even more. Usually it’s because something big died. When players get better the difference decreases a lot. Good players fight for a handful of points or less. That’s why komi exists.

So, be happy to win a game and be comfortable if you win by 40 points. There’s no need to humiliate your opponent by destroying him. Go is a game of share (some territory to white, some to black) not a game of conquer and submit.

How should I have approached this damned 126th move?

And avoiding contact moves.
You were already ahead by far. If you just had surrounded that stone by distance (say 2 point jump in all directions) it would have been very difficult for white to make a living shape and the reduction would have been way smaller than it was.

my opponent invaded my beautiful moyo

I wouldn’t call the center area a “black moyo”, even if completely surrounded: it’s so huge and completely void.

I don’t agree. B has a lot of power to potentially kill an invading stone. And @smurph proposal of exercise is quite relevant to explain that. It could be a moyo if you are ready to give away a small piece as you point out later, but it could be a territory already.
They were many times indeed before that where b could have made something less big but more secure, but the spirit to push to the maximum size a moyo is a good spirit in itself.
@CaioMGA it’s one fundamental to make a difference between a moyo and secure territory.
With a moyo you accept that your opponent will come in, even you push him to come in because even if he can you will get still good benefits from it. Learn to share.
If you think it’s yours already then you have to kill, it’s a different process.
It’s a fundamental because you have to take decision between both as it will change the way you manage it.

Another fundamental is to learn how to use the influence you build. The wrong way is to think Lego the construction game, as usually it will not give you enough points. The way to go is to use it to attack instead, from behind, driving your opponent against the wall, and even without killing something, to create new boundaries (or influence) with your attacking moves. It’s hard to put in practice but it’s how go works.

What would you like to get with this game? A 120 points victory? That isn’t Go, that is greed.

I am thinking in my future games. In a more balanced game that kind of invasion may cost the game.
This is not greed, for sure.

I thought of moyos as indestructible, now I see it was foolish.
Thanks for the insights.

In this situation, white is probably dead. However, that often won’t be the case. Often times, there’s going to be weaknesses and defects in your shape that white could use to get enough aji to live. If that’s the case, ask yourself the question: how small of an area can I let white live in? Instead of connecting, play a bit further away, and make sure you know how you’re going to deal with white trying to push through the gaps in your stones. Even if you only get most of a big moyo, that’s often enough.

If you do decide you’re going to kill, poke out any potential eyes. At move 173, in this game, you could play F9 or F10, for example, to make it hard for white to get eye space off the side of the center group. Instead, you played a defensive move that wasn’t really necessary. Your next move was also an unnecessary defensive move, connecting an already connected group. Make sure you’re using your moves to keep up the pressure, and that you aren’t giving your opponent time to make shape and live. Strengthen weak groups, if you have them, (especially if you can do so in a way which limits your opponent’s options, but if a group can easily connect to your outside walls, and those walls aren’t in danger, focus on playing on your opponent’s shape points, rather than on making sure that everything is extra-super-connected.

In the game, you played a lot of puppy go, following your opponent around and responding wherever they were playing, rather than trying to eliminate eye options, and played a lot of unnecessary defensive gote moves. When your opponent eventually went back and made eyes in the middle-left, it worked because you gave them four free moves in a row to make shape. Here’s a review with some comments: 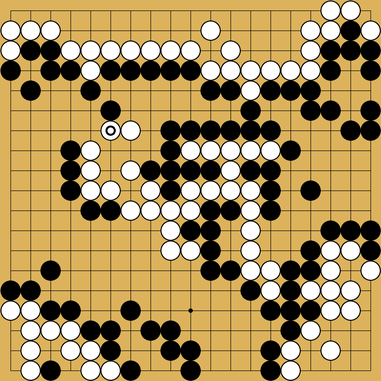 Just a kyu here, but here it goes.
There is a O Meien 9p saying that you should push your opponent from the wider side to a narrower side (the saying itself might be older but he wrote a book on the topic). In this game, the left side is wider.
Then, I would count the white territory, and he has roughly 50 points. I would have a quick guess as to how much I would gain if I play the H10; probably more than white even if I were to answer submissively to white J12 with G12, and J8 with G8 (with 6x9=54+a bit more). With potential territory to the right and bottom, you could win if you let it live, even with a fair amount of territory.
Even if your opponent answers your H10 with, like F10, you could still let it live and win, with like, 3x9=27 points to the left, 20+ at the bottom, 20+ to the right.
I often fall into the white’s position, and my thought is that; ‘I need to expand my white group as wide as I can AND make my whole group live. To do this, I need to make the situation as complicated as possible and wait for the opponent’s mistake.’ You just need to frustrate this strategy.