Well, I guess that nobody minds cross server gossip here. So the word is that KGS had been sold. My question is: Does anybody know who it has been sold to?

This is actually the first I hear of it. Can you source it, somehow?

There is a thread on reddit which gives the original source. It seems an unlikely subject for a hoax, but I suppose that we can not discount the possibility that it is somebody’s idea of a joke.

p.s. Rumor on the floor of the exchange is there will be a Dutch auction IPO. Shhh.

The post came from user Billy McBoatface, aka Bill Shubert, on boardgamegeek.com:

Just yesterday I transferred my business to new owners. But I’ll be active in it for a while more until they have it running well.

It is/was KGS, the largest online server to play Go in the West. I got started because in the late 90’s I wasn’t happy with the existing go servers, so I wrote my own, and it was way more successful than it ever expected. Frankly I never expected it to become a business of any kind, but it became big enough that I had to try that. Around 2002-2003 I took a few months off my day job to try to make KGS profitable, and while it did become profitable, it did not earn enough for me to work on it full time.

I loved the programming, hated pretty much everything else about it. Running this business meant constant dealing with money (writing checks, taking checks), people, IT, etc. Frankly I just wanted to be left alone where I could write code. I finally burned out on it and stopped working on it entirely, with predictable results (business dropping year over year). I’m hopeful that the new owners are able to turn things around.

No word on who the buyer was or who might be interested in buying a Go server in the first place. I wouldn’t dismiss the possibility that it was an internal sale, in which case there might not be much change at all.

Let’s hope the new team can make a decent UI.

I went to KGS and asked the people there what was this about.

Got told by mod that those were “unfounded rumours” and that that kind of talk was not welcome in the chat. Even got warned by another user that others had been banned for talking about it (because, you know, asking is now a crime somehow).

It seems that at least the unwelcome environment and the unreasonable mods haven’t changed at all.

I suppose that you just have to ask about it in the correct room, like the Help Room maybe.
Anyway, this kind of information seems to directly contradict the original post. I know that it is not unknown for some or part of the adminstrators of KGS to be kept in the dark about what’s is going on, but selling the server seems a bit extreme. Some guy on Reddit kind of promised that there would soon be an announcement on the sale - but there has been nothing about nearly a fortnight, so maybe the whole thing is a practical joke. (Funny joke though!)

Score one for our favorite online Go server, OGS!!!

One stone. What else…it’s Go. And sometimes that’s all it takes to win.

Any change at a competitor will initiate new activity at the alternatives. Even the discussion of a sale, whether it happens or not, has that effect. This is especially true given the alleged conversation-chilling position in KGS forum (described above) and the purported statement from the selling owner, one which casts a gray cloud over the long-term future of his website.

Hopefully they’re reacting like that because they realize anyone with half a brain would can and ban half those mods.

Hmmmm … What if WMS transferred ownership to the KGS Admins? Just speculating, but there was a hint.

then they would be the new owners

And they wouldn’t can themselves, for starters.

Interesting news. It’s pretty hard to point to anything of value left in KGS environment. There are few things which would be extremely hard to transfer or monetise - like learning environment, some study community, and only one really ‘innovative’ aspect (imo) that is the ranking system.

Honestly we do need a one solid western Go sever rather than a multitude of so-so platforms. I do believe that OGS is the platform of the future, but KGS barely floating on the surface doesn’t seem to help the cause. I’d much rather hear that OGS stuck a deal with KGS - purchasing the ranking algorithm and setting a deal where KGS officially could bless OGS as it’s successor and worked on ways to migrate the users/rooms to OGS automatically. Problem solved, everybody are happy.

Thanks, @Marathon, this is very interesting. 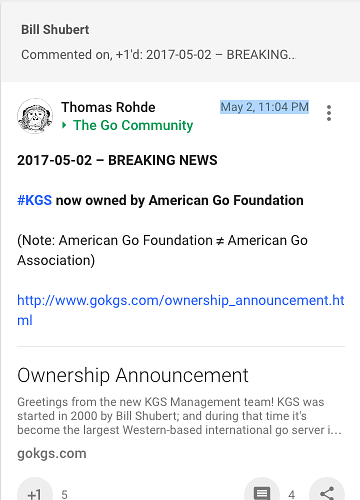