From the book ‘Graded Go Problems for Beginners 2’.

Even with the solution given, I think white is still able to live…

Can someone explain to me what the following steps will be to capture white’s stones? I don’t see it 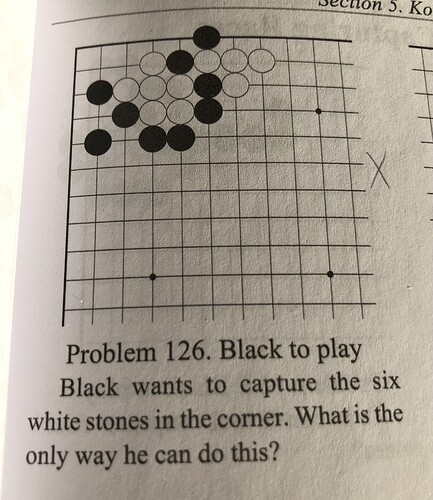 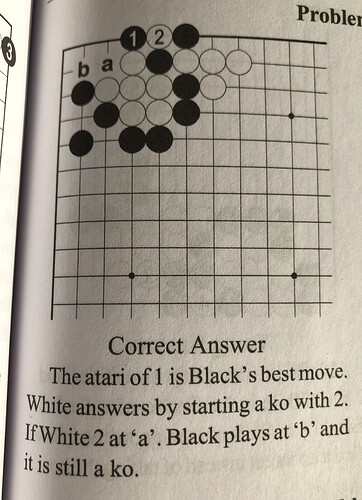 In practically terms, after white 2 black makes a ko threat and white answers, black takes back 2 and ignores a threat from white to capture the stones.

After Black 1 and White 2, the Ko Rule prevents Black from capturing the single white stone immediately, therefore one may conclude that this is a failure for Black. 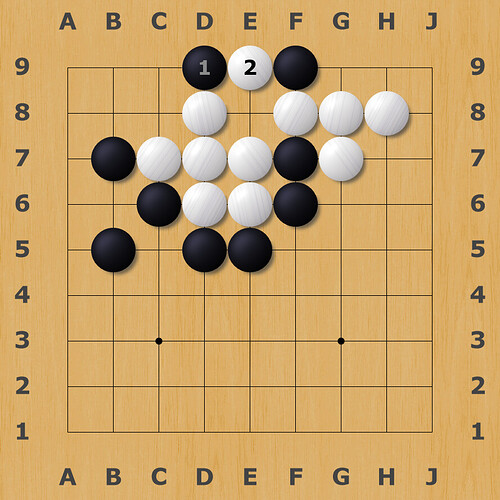 However usually in this kind of situation, a Ko fight starts. In a Ko fight, both players play threatening moves somewhere on the board, trying to force the opponent to answer, thus enabling them to recapture the Ko the following move. 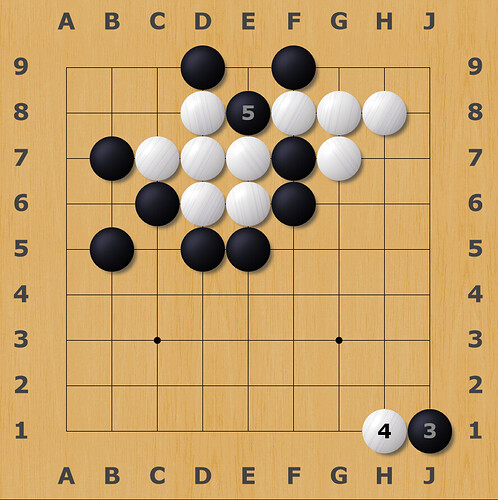 Imagine that Black has a threatening move available at some other part of the board (represented by Black 3 here). White needs to answer or incur a significant loss. Then Black is able to recapture the Ko with 5. The outcome of such a Ko fight depends on how many “Ko threats” each player has available.

In the given problem, Black cannot capture the six white stones, unless Black is somehow able to win this Ko fight.

So it’s all about a forcing move (the need to respond to a Ko), instead of the question if black can capture white’s six stones.

Question could be better formulated then. Was about to lose my mind

In the question, ‘can do’ should be replaced with ‘could try’, right?

There are many Go problems where the solution results in a Ko fight. While the outcome of a Ko fight is uncertain, the philosophy is that being able to start a Ko fight is better than not being able to do anything at all. Consider a problem that asks “Can Black save this group of stones?”. Generally there are three possible outcomes: Yes > Black can start a Ko > No

These kind of problems are good to raise your awareness about possible Ko situations. Regarding the formulation, I don’t know much about that. But I know that many Go books are translated from an asian language, and the translation is not always optimal. Once you get used to it, understanding the meaning is usually not a big problem though.

In the question, ‘can do’ should be replaced with ‘could try’, right?

But seriously, there is some truth to it - when faced with this problem in an actual game you would need to ask yourself - can I kill? if not, can I kill via ko? if so, can I win the ko fight? if so, (and there’s nothing bigger to play) then you can play, fight the ko and kill the stones. if not then don’t play there - save it for ko threats you can use later.

If you only “try” then you are as likely to end up wasting the potential you can use later. Maybe, the balance of ko threats in the game will change in your favour. Maybe another ko fight will start and you can use this position for threats. Maybe the local position will change and make this something you can kill without fighting the ko. anything can happed over the course of a game!

in summary, for go problems, you just need to assume that if you cannot kill outright then it’s worth finding the ko (or seki) sequence and that will be the “correct” answer