Ladder rules, who climbs up?

Hi, hope someone can explain this to me.

What happens at the end of game A-B?
If A wins, nothing changes. He’s already upper than B.
If B wins, will he stay 491 or will he reach place 480?

Thanks for you answers.

B will be at 480. Challenged can also climb the ladder. So for example, if you moved up and decided to cancel a game against now lower ranked person, they’ll move up ahead of you.

Tip for moving up in ladder faster: don’t play slow players, they just block one of your slots. If you play only fast players (and you’re fast yourself) you can reach for example top page of 9x9 ladder in couple of days…

No the defending/challenged player does not move up. You can only move up by challenging other players. 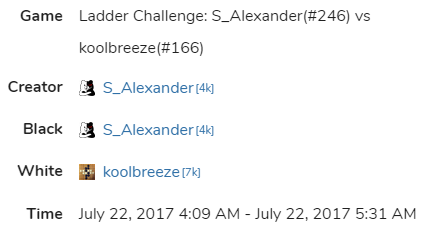 So I decide to cancel the game against #235, and look at his profile: https://online-go.com/player/319970/
Right now he’s at #168 (he probably lost couple of places, because other players moved up, it was a while ago):

And he didn’t win anyone, except me according to game history:

@S_Alexander, how could you know if a player is fast or slow?

I can look at their profile and see how much time they have left on clocks in games they’re currently playing. Stuff like that. Plus through OGS API you can access game records and how much time was spent on each move.

@KillerDucky wrong. @S_Alexander is right. You do move up if you win against someone who challenged you and earned a higher spot before that game ends.