Learning Joseki: When to learn and how?

From what I understand, Joseki are similar to Chess openings, in that they may not represent “perfect” play, but are commonly accepted as near-optimal response sequences that can be memorized for certain situations.

If that information is correct, then I imagine it is beneficial (as in Chess) to take a holistic approach i.e. Learning first to play based on PRINCIPLE, so that predetermined sequences are not just memorized but UNDERSTOOD. That way a player is prepared to cope with opponents who go “out of book” and respond reasonably in the absence of encyclopedic knowledge.

So how can a new player learn the principles guiding those sequences, without relying on rote memorization as a crutch?

And when does memorizing specific Joseki become important to progress as a player?

w player learn the principles guiding those sequences, without relying on rote memorization as a crutch?

Maybe a bad non-go analogy would be: would you rather be the perfect sprinter with perfect form and perfect body and optimal technique running into a cage of hungry lions or be a standard slightly overweight dude that hasn’t run in years but walking away from the hungry lions? One should choose the correct direction to move in before considering the best way to run. Joseki in the wrong direction is basically running with perfect form towards the lions. It is better not to run at all if it means you get to move in the correct direction (away from the lions)… Yes I am really bad at making analogies… sorry

As a new player, I would say forget about Joseki. Can I ask what rank you are? Feel free to send me a friend request and we can play a teaching game some time if you like?

P.s. Oops, This was a much longer answer that I thought it would be. Sorry!

I guess i agree with what @KevF has said, including the lovely metaphor ^^

If you are looking for a “right” way to handle joseki, then i think the best advice is to not study many of them briefly, but a few at a time in depth. This way you can pay attention to why certain moves are chosen in a joseki and you will notice recurring shapes that can (if you know what they do) then be applied to totally different situations unrelated to corner openings.

As a new player, I would say forget about Joseki. Can I ask what rank you are?

Probably like 150kyu lol. I don’t think I have played enough to establish an accurate rank yet.

Reason I ask is cause in my current game against an 18k player, he is referring me to Sensei’s library of Joseki for corner play, but I have only a vague understanding of WHY those moves are considered ideal at this point.

WHY those moves are considered ideal at this point.

The way I see it, and I have to agree with the said above regarding learning joseki, is that this game has been played for literally thousands of years. Therefore common sequences were played through trial and error many, many times to the point where today we refer to them as joseki.

Maybe an analogy to chess would be to say that the towers are worth more than the knights (no idea if this is true btw), but this just an understanding as it obviously depends on the situation of the board. At one very particular point in the game even the pawn might be worth more than the queen herself, right?

Now WHY each move in a particular joseki is considered ideal, I cannot answer that but that’s where the difference between learning and studying joseki is.

EDIT: I recommend to check out this website similar to josekipedia to review a few basic josekis, with a brief description to the reasoning behind each move.

According to krnzmb(a high dan player on OGS), you can get to tygem 6D with basic knowledge of joseki (say around 30 common ones).

I’m 3k, and I can say that at this level many of my equal opponent still deviate from rather common joseki sometimes. I think at kyu level understanding purpose of moves is more important than memorizing joseki. The slight disadvantage of not knowing some joseki can be easily outweighed by everything else.

Memorizing joseki is a lot of work and I’m not sure if it’s worth it at our level. You can just learn the basic josekis natrually by playing and reviewing.

I have only a vague understanding of WHY those moves are considered ideal at this point.

Okay, when/if you start studying joseki and you see a move you don’t understand the “why” of, a recommended method is to see what happens if that player tenukis or makes a longer extension (a shorter one is usually not bad, but slow, a longer one generally has some sort of punishment or aji for later) and experiment with it a little.

This way you can deal with those who break joseki.

Probably like 150kyu lol. I don’t think I have played enough to establish an accurate rank yet.

Reason I ask is cause in my current game against an 18k player, he is referring me to Sensei’s library of Joseki for corner play, but I have only a vague understanding of WHY those moves are considered ideal at this point.

I just got your challenge, Have a nice game!

Maybe it is enough to know that it is possible that both players can play in an area and they both can be happy with the result. If a situation ends up about even for both players (from a professionals point of view) then it is considered Joseki.
I will put a simple joseki variation in our game

Maybe it is enough to know that it is possible that both players can play in an area and they both can be happy with the result.

That’s a strange concept, coming from a Chess background

Let’s put it this way… if you can solve dan level tsumego in a reasonable amount of time and really don’t know how to get more of an edge in games, that’s when you might want to look into joseki study.

I’ve forgotten more joseki than I learned and win/lose around 99% of my games based on my reading in fights.

If you’re the diligent study type, it really doesn’t matter what you do as long as it has to do with Go - and you’ll improve. Feed your own neural net. Replay a few pro games to get a feeling for the flow of the game, practice tsumego hardcore (most important skill is reading after all), watch a few of the great Go videos on youtube (I recommend yunguseng dojang and Haylee)…

And finally, if you’re lazy like me, just play 10000-20000 games… with practically the same opening configuration. Fuseki really doesn’t matter much until you’re at least 4d here.

He’s essentially saying that a joseki is something of a Nash equilibrium (although not quite since there are so many joseki options): if either player plays differently they (probably) get a worse result (unless it’s a different joseki), so they play the joseki to get the best result for that corner.

I think one important part of the question that is fascinating is the “how do I study them”?

Study does not mean memorize, it means “understand why they are the way they are”.

As far as I can see, the only way is to explore what happens if you do differently.

However, this is a very challenging task, because it can be quite subtle why the outcome of a given joseki is better than some other outcome.

It’s literally the experience of hundreds of experts over maybe as many years that has lead to the collective conclusion that this is the best that can be done.

In that context, how to study the “why” of this seems daunting. I’d love to find some analysis of this, if someone knows where such is, or felt like doing it

I think joseki are valuable not by knowing any concrete sequence but because they exemplify a loot of things that go into good go. Good shapes, taking sente, life and death, positional judgement etc. So studying joseki and thinking about why of each move can be really enlightening. It is also interesting to play some non joseki move you like on the board and try to work out “why not this”. Sometimes you can’T find anything so try it against dan player and he/she will show you (sometimes you learn it is only somewhat suboptimal rather than outright bad.

Example: I study particular tenuki joseki variation and I don’T understand one move that makes empty triangle rather than what I would deem good shape. So I play around with the variation and after few minutes it is clear to me. With my move, opponent could get a good shape in sente. So taking away good shape move from opponent can sometimes be of greater value than making one yourself if you are stronger in the area and it is good to try and learn to think that way too. See? I am learning already

Also I think it is very valuable to look how pros actually play joseki and how the play continues from them. And when they deviate or play unusual variation it is good way of learning to try to understand why.

Here is one interesting follow up joseki situation. (interesting to me at least) 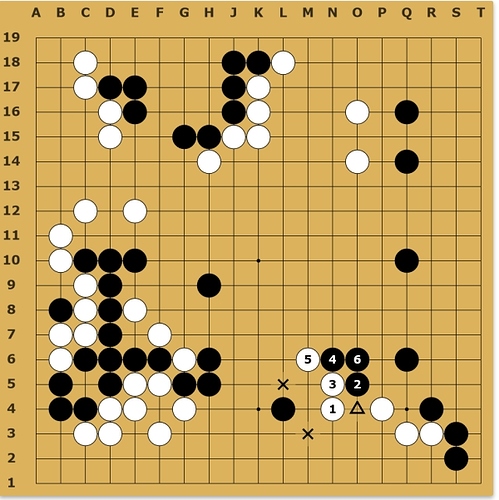 This is from game between O Meien (black) and Takemia Masaki (white). With 2 you are already in variation not to be found on josekipedia. In my lowly kyu perspective black looks to make center big and lock white inside so it makes sense to me. after nubmered moves white needs to fix and to me X points are knee jerk “standard looking” moves. After push at triangle point white is not so good off. In game Takemiya actually played at that triangle point. Now I might quite likely be wrong about all I said about this situation. But what I think is important to at least try and think about this stuff. Understanding strong and weak points of particular joseki and being able to at least vaguely understand possibilities of following play - playing itself (especially with stronger players) will put your thinking to the test.

All Go concepts are strange, coming from a Chess background.

@KevF From my asymptotic 15k viewpoint, I’m very happy to read this, because I recently had an opponent, himself asymptotic DDK, ask me “you don’t know joseki, right?”, sort of patronizing way to say “go do your homework”. To which I answered “no, I’m lazy”. Now I will have a ready-made answer “Let’s speak about it when we both get to SSK or dan, if ever”.
That said, a bit more seriously, I agree that the difference between learn and study is key. As someone said, studying is certainly reinforcing your neural network and rooting the principles in your brain. To go along with your metaphor, this is true of all disciplines or martial arts. Learning “tricks” without understanding the principles is counter-productive.

that sort of thinking is wrong for any level of play. If you cant call out an opponent on misplays, then telling them to stop misplaying wont make you stronger

.
strong players wont think that way anymore, because they have accepted that the “burden of proof” lies with them. thats how they got strong!

(EDIT: and that is already assuming that playing out of joseki is a misplay, which isnt necessariyl true.)

It’s interesting that a few people have said “I don’t study josekis, I only know 10-15”.

Are you really saying that the minimal “I don’t learn josekis” person should still know almost a dozen?

I think the key question you missed is ‘What for’