I’m trying to use Leela 11 to review some 9x9 games: I use analysis, but after a while or few moves the program stop responding… did someone have the same problem? Possible solutions?

It happens both with standard and GPU accelerated.
Seems like program hangs up when thinking too much…

How many simulations? Maybe your computer is too good and it runs out of memory or something.

My potato laptop works fine, I analyze at best like a million playouts.

I have to dig further. It looks like a matter of “focus”: if I stay on the program it seems to work well also with some millions simulations. But if I switch between Leela and browser it kind of freezes. I did that a lot on 19x19 without any problem. It’s the first time I do it on 9x9.

No suspicious switching between Leela and Browser

You know, you can load the .sgf directly into Leela? It is usually easier than manually replaying the moves

I open SGF with Leela and I also open the OGS game on the browser.
I use the latter one as a preview of the next move that’s been actually played in the game.

Leela doesn’t have a preview for next move: only heatmap of the moves she’s evaluating.
I don’t remember my moves, so I need to go forward one move to compare my move to those evaluated by Leela.

Well, I think I’ve noticed something that doesn’t make much sense to me: I believe that Leela adds my move to the list when I go forward and backward one move.
Perhaps she just increases the “effort” she puts in evaluating that move, but the heatmap changes and I have the impression that she tries to flatter me adding my move to hers.

Sometimes I also make a review on OGS based on Leela’s analysis and I use browser to do it. 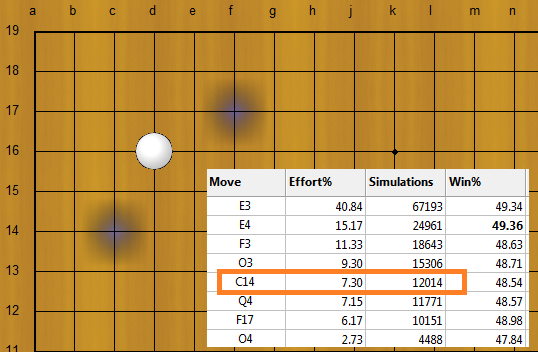 Then I go forward one move, to see where I moved, and back again: 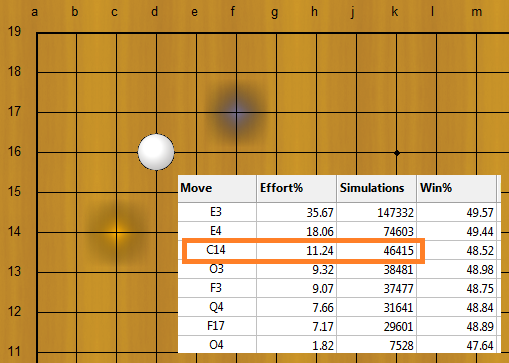 My move suddenly chages color: yellow instead of blue.
It’s a little difference in effort (11% instead of 7%) but it jumps out on the screen.

If I leave it there, after some more simulations, the effort drops down again to 7% and the move becomes blue again.