actually 20 block network is slower. So it better than 10 block only on very low number of playouts and on very high number of playouts. On normal time on normal computer 10 blocks gives higher level because far more playouts happens in 10 seconds.
It will change only after long training.

Lets do a haylee rematch! I would like to know how it would go if 8xV100 was used 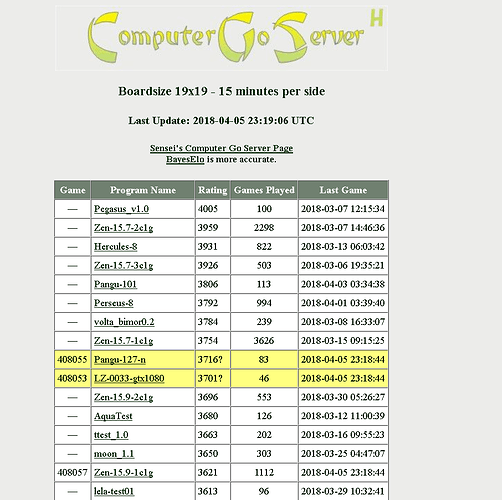 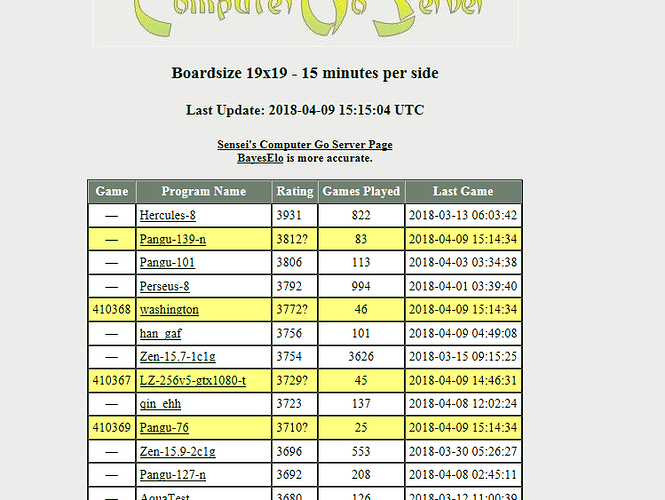 This morning a new network 117 came out

So yes 15 block just came out. the 20 block is not official. But 15 block is just as good if not even better because its faster to compute…

See test I did this evening:

Both sides on 3600 max playouts and 10 seconds/mov or less. Alternating black/white. no ponder either side.
Basically same playout but also same time limits. I observed neither side took more time to think than the other side.

Note: I forgot to do a full tune of the larger network until after the games were already played. I’m unsure if it would have made the new network even stronger, but it couldn’t have hurt it that is for sure. I couldn’t get gomill ringmaster to work and since I’m on windows there isn’t the validation option so I manually played these games in Sabaki.

It seems like network 117 is at least mid-“pro” level for sure now… at least I don’t have any doubts that it isn’t.

I observed in the many times in which the Haylee 10 block network did would manage to get ahead early on in the game but the network 117 would win the arm wrestle each time and come back from the grips of defeat to clinch the jaws of victory. This and other things showed me that it is indeed much stronger. also… It didn’t fall for any ladders whilst the Haylee network lost at least two games because of bad ladder judgements. There were many times I was watching it play and felt for sure the new network lost, only to see it dramstically reverse its fate and decisively win at the end. I believe if OGS were to do a rematch with Haylee, only one gpu would be needed this time as opposed to the 4 gtx 1080’s used last time around.

Basically its almost been a month since that haylee network first came out, (this upcoming matches with golaxy will be exactly a month) and officially it was the first Leela network to beat a pro with hundredds watching on youtube and ogs. Network 117 is also significant because it came about after a week’s of stall, and is the first 15block network.
With MiniGo fully admitted to being stalled, and LCzero chess not doing that great as well lately, I think the last few weeks have seen a pretty reasonable improvement (considering the uptick and network resize at the end) and hopefully with switch to 15b 192f there is bit more to squeeze out of this before moving to 20b 256f very soon and then maybe even 40b 256f once 20b flatlines or into superhuman arenas before its all said and done.

Instead of the PlayMagnus chess app, everybody in the world deserves a free “play ke jie” Go app or equalivent. This is close to making it happen for the masses of the people worldwide will have a superpro at everyone’s fingertips at zero cost…

The 20x256 nets never got promoted to the official track. The reason why, as far as I understand, is that they take four times as long to train, compared to 10x128. The idea behind the training process for LZ is that networks are trained until they start to plateau, at which point a larger network is trained from the existing network. Ideally, this should lead to more efficient training than jumping straight into the 40-block nets that AlphaGo used.

Training a 15x192 is about twice as fast as training a 20x256 net, and they’re improving rapidly. The strongest 15x192 is now stronger than any of the test nets, though those were trained on older games.

It has hit top 2 on the cgos charts, something that has never happened before, regardless of how briefly, and it went above 3800+ elo, also a very first-time event… as the 3800 barieer has never been broken by LZ before, regardless of it was only temporary… Not to mention it would have most probably broken 3900 (albiet momentarily) had I not stupidly clicked into the cgos dos prompt box and timed it out with that one game in which it was already a sure win. To be honest I don’t think any average pro or even any pro below the top 100 official ratings rankings even have any chance anymore. 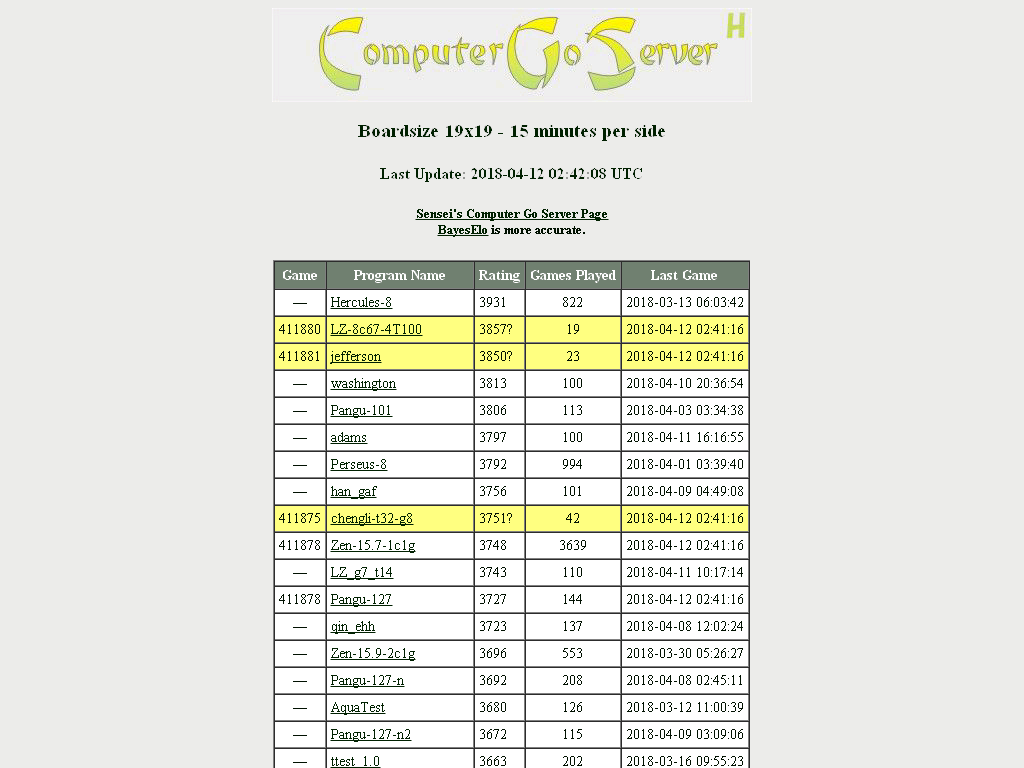 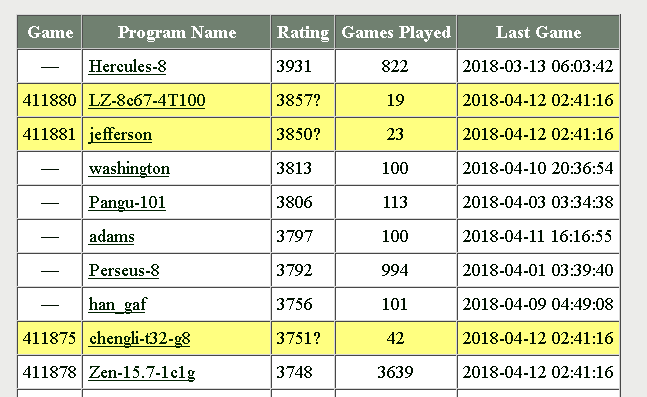 Where is AQ on this chart?

Careful! On CGOS, Bayes Elo should be used because the incremental Elo is not accurate, especially when the number of games is less than a few hundreds (only 19 in your image!).

Also… does anyone know who’s using the Greek demigod / US presidents nomenclature for bot versions?

I really wish CGOS would list some more information for its bots. Namely, what version of what software they’re running, who the author is, and what the hardware is.

Yeah, that is a bit silly really. It would make much more sense to run the tests on a defined setup (or even better, 3-4 different setups (4 monster gpus, 1 monster gpus, 1 mid-level gpu, cpu only)). Ideally, the same person would run all tests on the same computers. Any volunteers with a lot of time and money on their hands?

Are there going to be any live commentary for Golaxy match?

Well, if the populus demands it… and knight4st happens to not be streaming at the same time… and I made some more headway with the work I need to do still… then I could offer some semblance of commentary.

When does that happen exactly? (UCT/GMT?)

Thanks. What does it mean to live stream “on 4 titanV”?