I notice sometimes that my game challenge is snowed under in the list of game challenges because there are users with 10 outstanding challenges. Is there a limit to this number? If there is, couldn’t the limit be a little lower? I noticed 10 challenges for long games this morning in the list while the same user already had approx. 10 challenges in the list last evening. So apparently those challenges are not accepted at a fast rate, so there is no need to enter lots of them at the same time.

Well i don’t think there is any limit and why there would be.
There are players who play a lot of games at the same time (over 1000 for some) so I guess they have to renew their list at times.

Oh yes, 10 open challenges at a time is the limit.
Ask @_Sofiam : she had to work hard when she decided to break the record!

@mmhmjanssen , I see your open challenge. It’s 16th.
Unfortunately “ariel” comes first in alphabetic order, but that player has just three games in progress, so hopefully their challenges will be accepted and yours will go up in the list.

I wonder if it would be useful to sort open challenges by time of creation: oldest first, so to help people with an (alphabetically) higher letter to climb the list eventually.

Anyway 20 open challenges don’t seem to be difficult to browse even on my phone and, by the time I’m writing this, the said challenge has been taken by some “illuminati” (the mistery deepens!!!)

A then, learned about that limit. Thsnks.

Playing lots of games doesn’t mean that someone has to create them all at once, especially if there is hardly any response to the first. So why not start with only a few and depending on the responses create new batches?

Sounds like a great idea to me to sort them historically. I am glad that there is at least a limit. I wonder why it is 10 and not 5 for instance or 3 for that matter. After all, three is a crowd.

A high percentage of correspondence games gets deleted by the person that accepts them before that they start. With 3 it might happen that you don’t get any new game.

I would like to see the limit at more than 10, maybe showing less of them if they have the same settings?

I wonder why the limit is not higher. It seems like more of an inconvenience for someone who does want to open many challenges.

If others do not like seeing so many available options in the list, I think that issue is better addressed by filtering and sorting features that only affect their display, rather than imposing limits upon others.

Where is the option to limit challenges of the same user to e.g. 1? If there is such an option I agree with you.

In that case, why have any limit? Let someone post 1,000. Sounds like fertile ground for a troll.

Please keep in mind that others may have different preferences. While it might not be inconvenient for you to have a limit imposed, it is clearly inconvenient to others. Even in my own experience, I’ve created 5+ open challenges before, and I don’t even play that many games. I can easily understand how others would find the limit of 10 to be inconvenient.

Sometimes a user would want to start several new correspondence games and that number is much larger than 10, forcing them to wait and repeatedly add new open challenges as the older ones are taken. What might appear to be 10 open challenges sitting overnight might actually be 10 completely new challenges in morning (with many more opened and filled in between), since someone might not have started enough new games yet.

From your perspective, I understand that you don’t like seeing so many available options listed, but I think your concern is mainly one of visual clutter rather than a desire to actually limit the playing activity of others. Hence, I am suggesting that it would make more sense to instead add better filtering / sorting options to hide available challenges that one does not want to see.

Even automatically compacting duplicate options in one single entry in the table (with a number showing how many are available) could be a possibility.

I think it is unreasonable to impose limits on the legitimate playing activities of others, when I think the problem is better solved through user interface design improvements.

Андрей Голомыздо and I started 500 games in less than one hour. 1000 isn’t necessary trollish. But I do agree it can be a problem.

Well, there probably is some reasonable upper limit that no human could reach without some sort of automated trolling. Just because 10 seems a bit small for some, does not mean that we could not have some other larger limit.

Further, I don’t think we should use concern about potential trolling as such a strong reason to dismiss the possibility of increasing the limit. This sort of rhetorical argument can be extended to all sorts of things…

Why allow people to play games at all? Or score their own games? Or send private messages? Or interact with other people at all? All of these are fertile ground for trolling.

In all of these sorts of interactions (from private messages to allowing people to open many game challenges), I think it is better to allow people the benefits having these features available, and then deal with the relatively rarer problematic behavior that might arise. If we place too much restrictions out of fear of trolling, then I feel like that’s an even worse impact of trolling. Imagine if we simply said “shut down the server, since trolls might come”.

Even automatically compacting duplicate options in one single entry in the table (with a number showing how many are available) could be a possibility.

To clarify what I mean, the current situation looks like this: 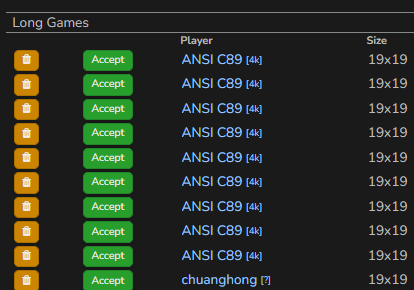 I like this a lot. Seems to me like the rare sort of compromise where everyone ends up equally happy rather than equally unhappy.

I didn’t say it was trollish. I said it was a great opportunity for a troll. The difference is that you intend to play the games, and a troll would just abandon them.

Why allow people to play games at all? Or score their own games? Or send private messages? Or interact with other people at all? All of these are fertile ground for trolling.

Now you are just being silly. You are too intelligent not to know the speciousness of that argument. Obvious distinctions in scale and possible consequences exist. Creating and abandoning thousands of games would be a nightmare. I have familiarity with similar troll instances, so I know what I am talking about.

You don’t believe in your own argument because you do recognize “some reasonable upper limit.”

If we place too much restrictions out of fear of trolling, then I feel like that’s an even worse impact of trolling.

I’ve never advocated that. However, I strongly believe in pointing out all considerations rather than burying one’s head in the sand. It’s called making decisions with eyes open, rather than with eyes closed.

Imagine if we simply said “shut down the server, since trolls might come”.