Don’t worry, I used the image view and now have the list view, I am sure that this is temporary.

That is reassuring, I’m really hoping for a solution soon, though.

The new site is really pretty, too. I like the changes overall. I’m just going to be “that guy” on this one issue

Hi there, ive been told in another thread that it depends on the number of games you play, i prefer having the thumbnails of the games, where i can see each game, rather than having a list, and i have a list at the moment.

Hopefully this will change as there does not appear to be a setting change option for this as of yet, but the change may have something to do with loading times and such, as i have 22 slow games on and i still prefer having the small versions of the game to see rather than having a list, but a list is what i currently have for the moment, and with 22 games it may lag or something i dont know.

same issue. only trouble ive had with the new site so far.

I use the thumbnail view, and it seems like the games aren’t listed in time remaining order, like it used to. Kind of useful if you have a lot of correspondence games.

Not only it’s not sorted, I can’t see in which games it’s my turn to move. I’d say right now the game list is kinda completety broken…

Yep - this is also something I am waiting for. The board view is not helpful for me.

FYI I’ve added in the missing control to determine what the cutoff for thumbnail vs list mode is under settings, which of course can be always show lists if you prefer.

Still does not work for me as expected. If I switch to thumbnail mode, the games where I’m to move are highlighted in green; but in the list view mode they are not. In either mode, the list is not sorted by the time remaining.

The new cutoff control does work, though

Yea, there’s still no visual difference between pending and other games. No sorting either

not knowing which boards are your turn to play in sucks.

@Sadaharu I think you are refering to paused games (weekend, or just pause). I’m sure it’ll be far more visible when it’s there.

(Oh, then I also misunderstood, like @Sadaharu … thanks for clarification, @mlopezviedma!)

Copying from another thread:

Regarding the display problem on the Overview page:

For now, please go to your settings page and switch to thumbnail view, something like my setting pictured below: 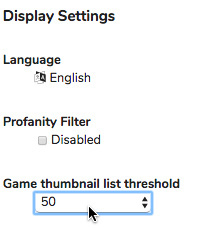 In Thumbnail View, the games where it’s your turn to play will be highlighted in green.

Ah, so it showed whether it was paused or not… And I was happy for a while thinking that the problem was solved…

Come on, anoek, come on! Fix all the things!!

Noticed that the list view is back as it was before now. Thanks!!