Was a link … “Alphago is an obvious potentially unwanted program”…

"HOW TO REMOVE ALPHAGO ADWARE EFFECTIVELY FROM WIN 10, WIN 8, WIN 7 AND MAC?
Written by Emmanuel
About Alphago

Alphago is an obvious potentially unwanted program (PUP) and please come to your PC with thousands of disturbing ads, and users can judge its infection by this sign. However, it is such an adware that it doesn’t afraid to be detected by users, and it can protect itself from being removed no matter in what situations. That is why we feel it necessary to produce this article and expect to help you out. …
"

and it goes on to describe how to “get rid of it”.

I bumped into that page searching for “Alphago Enclosure”

Since BHyden’s security blocks it, I’ve removed the link. But as I said, my security said it was fine…

The page itself shows clean though - as far as I know it’s a safe link. At least, Bit Defender thinks so.

(In case anyone had a heart attack reading Adam’s first line! 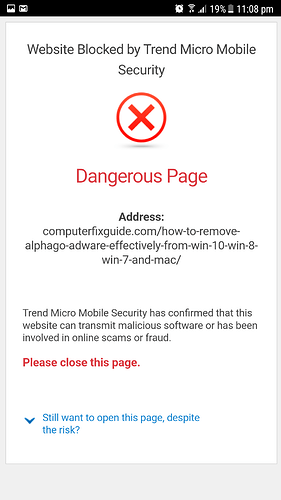 Since BHyden’s security blocks it, I’ve removed the link. But as I said, my security said it was fine…

It’s possible mine is being a little overzealous, but doesn’t hurt to be a little careful these days.

Thanks for copying out the text for everyone!

Haha I rahter meant I have fallen ill, after discovering what they did to English language.

The site itself is clean, but tries to push scared users into downloading software which, while tenchnically maybe not harmfull itself, has been often times reported to display false positives and demanding payment for subsequent “fixes” etc. etc.

Just wanted to be sure no-one who might (think) have a problem with PC regarded the site as trustworthy and followed fixing advices from there.

Have you ever received the call from that one person who says your computer is broken and that they can fix it, and then they tell you how to “fix it”. If you follow their directions and “fix it” it will install a virus on your computer(ransomware) that will force you to pay them to remove it. This is basically exactly like that… so just to add my voice to this: DON’T REMOVE THE ALPHAGO SOFTWARE!!! IT IS IMPORTANT!!! EVEN IF IT DOESN’T EXIST!!!
-MrC

I guess its conceivable that people are trying to find out how to install Alphago for themselves, and end up installing some malware. Not a bad idea for a rather nice malware