Lose your first 1000 games as soon as possible 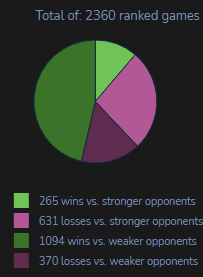 It took basically 5 years but here we are.

Not really a loser.

@S_Alexander has more likes received, given, created more topics, etc. than you. He is leading 7-0.

Having said this, I always wonder about this; where does this expression lose your first 100 games come from? And what does it mean?
When I started go that was in a pool of beginners at the club. Somehow I did manage to win several of those first 100 games, but don’t ask me how

It’s a Japanese saying about being a beginner at go, well for what I know (very few).
It means how blind you are from starting to play go for some time so you can only lose for a hundred games.
Means that there is no help besides playing these 100 games

The message is that playing is very important to gain experience, especially in the beginning. Beginners should also be encouraged to learn by trial and error. So they should experiment a lot and not care too much about winning. Winning is not neccessary to improve.

But I don’t like that proverb much. It sets a negative goal.

The proverb is meant to be a bit tongue in cheek. Of course, the fastest way to lose 100 games just involves resigning early, but the point is to gain experience while playing against stronger players that will beat you. A beginner could also find easy games to win, but playing against even weaker players, especially early on, won’t gain as much experience.

In my interpretation it’s not about playing stronger players or losing. So it’s more correctly expressed as “play your first 100 games as quickly as possible”. The idea is that you shouldn’t try to study go or get reviews or anything in the very beginning. You just need to play a bunch of games to get go, get the feel of the game, it’s a crucial step. You need to get used to the process of “players place stones->sometimes they’re captured->when everything is divided, game ends”. Of course, when you’re noob you’re likely to lose but it doesn’t matter. You shouldn’t try to read too deep into it. Or bother stronger players.

I think it’s just a simple encouragement to persevere in the beginning.

In my interpretation it’s not about playing stronger players or losing. So it’s more correctly expressed as “play your first 100 games as quickly as possible”. The idea is that you shouldn’t try to study go or get reviews or anything in the very beginning. You just need to play a bunch of games to get go, get the feel of the game, it’s a crucial step. You need to get used to the process of “players place stones->sometimes they’re captured->when everything is divided, game ends”. Of course, when you’re noob you’re likely to lose but it doesn’t matter.

I think I’d also interpret it like this as well, but I think even a 100 games in an expression as such is a bit too high to be reasonable

You could probably get the game after about 10 games, be fairly used to the playing stones, getting captured, passing and scoring, that whole cycle.

This part I’d prefer if the community could just drop from their mantras, that somehow getting better at the game, being sdk or dan on some server or go association entitles them to something, or some kind of respect. I think it’s much easier to respect the person than the rank.

I think it’s just a simple encouragement to persevere in the beginning.

Surely there’s a better way to phrase it though. This is obviously what we’d like to convey with a statement like that, or similarly

The message is that playing is very important to gain experience, especially in the beginning. Beginners should also be encouraged to learn by trial and error

is also the same thing that’s people are trying to convey.

Except losing 100 games isn’t that much fun, even for people that enjoy Go and have stuck at it for a while, not just for beginners or new players.

One could also just do self-play and self study if one wanted to learn by trial and error, or even just play bots, but I’d wager most people proclaiming “lose your first 100 games” will likely also proclaim “don’t play bots you’ll learn bad habits”.

I avoid using it for advertising the game, there are surely better things to say.
I used it when I have the complain about losing too many games or being blind… More like no worry we had the same difficult start, it’s not because of yourself but because it’s like that, the game is difficult to start with.

I strongly disagree with this type of mentality among beginners or others in the Go community. I really hope that beginners feel welcome to seek games against opponents that can challenge their strengths and exploit their weaknesses, since such games provide the best opportunity to gain experience and learn. While there are some that take the view that they don’t want to be bothered with games from weaker players, I think that there also plenty of stronger players that are happy to give others the opportunity to learn, so I don’t think beginners should be broadly discouraged from “bothering” stronger players. If someone does not want to accept such a game, let them be the one to decline, and there’s no need for beginners to preemptively censor their own invitations.

Going back to the original topic of the proverb, consider why it is not just instead “play your first 100 games as quickly as possible” or even “win your first 100 games as quickly as possible”. I think the proverb speaks to the notion that loses offer a unique opportunity to learn, since one must have been challenged in such a game. On the other hand, a beginner could almost always find a weaker player or easy bot that they could repeatedly defeat, however taking 100 easy wins that way won’t necessarily be so helpful toward improving and might even be counterproductive, since one could reinforce bad habits and learn terrible moves that won’t work against stronger players.

I’m also not saying that one must only play against stronger players in order to the lose 100 games as quickly as possible. I think the proverb is less about the literal speed of completing these 100 loses (since clearly it is not meant to encourage one to simply resign immediately 100 times), but rather that one should not lament such losses as they are actually a gift of experience and learning. Playing a mix of players, even those that might appear close in strength (according to some rating system), is probably productive enough, since some opponents will turn out to be much stronger or weaker than expected. This also gives a chance that both players could learn from each other.

Ultimately, we’re all weak amateurs here and shouldn’t ever abandon the notion that we are not still learning or think that we’re strong enough. I think we should all keep the beginner mentality of seeking more experience, and at the same time realize that we can and should offer others experience and opportunity to learn as well.

As Bruce Lee said “don’t repeat an excercise until you get it right. Repeat it until you don’t get it wrong anymore”. My escrima master used to say a similar thing about throwing 1 million fists wrong before makin one right.
Go is not much different from other arts of “one against another”, and shares many philosophical rules. It needs and teaches self discipline, and attention, as we all learn from our mistakes, how our adversaries counter them for examples.
I think it is just a realistic phrase. Maybe they are not literally 100 or 1000 but the point remains the same. Don’t be scared by it, it’s not a goal, it’s more like a granpa saying “try again, it takes time”.

I remember that when I was very little, my uncle would come to my house to teach me, and I would play whatever I want, and he would smile and just keep going a few steps very fast to show me what my move would lead to. Then we would go back and forth try other variations again and again all day. It was like I played a game that I’ve lost hundreds of times in one go.

I also remember after a while, I was able to consistently play moves that made my uncle pause and think for a bit, instead of instantly react to them. And I think that’s when he started to gave me books and sent me to a school with my teacher for more formal training and had the opportunities to practice with my classmates.

I think it is fair to also take into account if someone has read books, played in real life, has a master or someone who teaches the game. Besides that it could make sense if that person lives in China, Korea or Japan where Go is much more popular with higher standards than western countries.

And then you have people who after a while, make a new account so that their winrate seems higher… Well, I don’t care, but I think these things can easily be overlooked.

I started playing Go for the first time on OGS about 2 years ago. After playing my first 30 games and losing all of them in 2 days, I had quit with it. 2 years later I picked it up again and I am glad I did, because winning only a few games feels so good right now and I am taking the game more serious. But looking back at 2 years ago the hard start was very demotivating to me.

Go more popular in China? I don’t think so.

Where are you from and what makes you think it isn’t?

I live in China

First there is a big diversity and differences between provinces, it’s like you say Cassoulet is a popular plate for European people. Then all the clubs are misery compared to western countries. Go is still popular for educating mind of some children, but it’s much harder as *20 years ago to play a Weiqi game in China.

I eat this fairly often in England, with just the small sausages and beans with some tinned tomato, and rice or potatoes on the side. It goes down very nicely :D

What do you mean by the go clubs are misery? The original comparison is popularity, as in the number of people that play. China has tons of little go schools for children.

Schools are different from clubs, not every kid is happy to attend, some just because their parents send them to (not to mention more homework). Most start out ok, but once they lose enough games and couldn’t rise to more advanced classes, they tend to drop out. Especially most schools will pick students to participate in regional competitions.

Students stay put usually because the teacher favors them (due they are more naturally talented, where one-on-one special tutors sessions are for rich kids), or those who really enjoy playing.