Loss by disconnection, but computer shows me still waiting for white's move

the computer had me losing by disconnection (I think I was going to lose anyway). But I had no sign that I was disconnected, just the timer of my opponent slowly ticking down, while I waited for his move. It still shows four minutes to go. Is this unusual? I’ve never met it before.

I’m not sure how disconnection works exactly. I imagine if you close the game tab (or navigate away from the game page) it will start a countdown timer to make you lose if you don’t return before then (used to stop people dragging out losing games/escaping and not resigning).

I’m not sure if this timer appears if you just change the active tab, as in you still have the game open but are doing something else in another tab while waiting.

Someone can maybe clarify?

In my case I only tabbed away from the game when I got a message saying the computer had finished analysing it. (Until then I wasn’t aware it was over.)

I had a similar thing happen to me yesterday, when my wifi crashed without me noticing, but the webpage didn’t indicate that it had lost connection. Since it was a long game I simply accepted that my opponent would take a while and sat in front of the webpage for 5 minutes, only to reload at some point to see that I had lost.

Was that a glitch or do you never see when you are disconnected?

I’m no expert but if you have lost connection how would the server be able to show you anything since you are disconnected? I guess if your opponent is suddenly not playing then that’s also a sign to check you are still connected? I’m not sure what else can be done. Maybe programme the page to refresh every minute or so even if nothing is happening so that your browser would show that broken internet page. But I have no idea how any of this stuff works.

Of course the server cannot tell the webpage that it’s disconnected, since it’s disconnected. I just always assumed that the webpage was in constant contact with the server to check wether or not a move was played or something was posted in chat and that it would get suspicious if the server stops responding for too long. Because for instance Fox just kicks you out if you are disconnected, and then you can try to reconnect. But that’s maybe not how it works on OGS (I also know next to nothing about interactive webpages).

I didn’t get particularly suspicious, because the day before that I played a game where my opponent took 15minutes to answer at some point and that worked fine. Those were 45min+20s games, where I think it’s normal to think for a bit before making a move.

if you have lost connection how would the server be able to show you anything since you are disconnected?

Clock still able to work when page is disconnected. Therefore its possible to create code that able to work offline. OGS needs code that notifies the user that your connection to server lost. This is an old BUG and it should be fixed.

In Live games must have a TAB OPEN on the ACTUAL GAME at all times.

If you close the tab on the game, you are seen as “disconnected” from that game, and the disconnect timer starts.

I do think that if you are actually still on the site, conceivably we could/should try to alert you in this instance… yet another good feature idea for the queue.

But the bottom line is “keep your lives games open”,

So it’s actually not a glitch on my part if I understand correctly, such a notification is just something that has yet to be implemented.

Where/How does one request a feature?

Link to the BUG please? I haven’t found one, and it is very important to fix it. And not a hard one.
I was just waiting for 3 30-sec opponent’s byomies to be finished to understand smth might be wrong with my connection. Not fair, as it looks like this is the opponent who is thinking long.

Are you looking for this?

### Summary When our pings start not coming back or are severely lagged, or w…e otherwise get a hard `disconnect`, we should display a warning message to the user.

for a game, I have to keep open additional window with status of my network
and I refresh page if opponent fully used one of his Byo Yomi periods

I’ve said it before but not in this thread. It is my opinion that the disconnection timer should only activate and tick down on your own turn. It should in my opinion be impossible to lose by disconnection while it is your opponents turn.

It should in my opinion be impossible to lose by disconnection while it is your opponents turn.

I’m not sure what you mean,

but exactly that happens:
you see that opponent didn’t do move in time and think that you won by timeout, when in fact its YOU the one who lost by timeout.
(you made move, then instantly your connection lost, then opponent made move instantly)

There shouldn’t be any loss for disconnections at all as long as the game page is actively encouraging you with various notifications to leave, without warning or any indication that you should return.

OGS rule about not leaving the game

It is not OK to just “leave” a game, by closing the browser tab or letting the game time out. 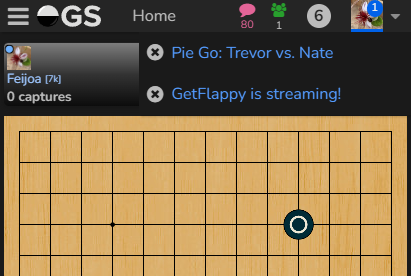 But I also noticed something interesting - if you are on any page that streams a live view of the game, like your profile, it doesn’t activate the disconnect timer.