Lost all goban images except the wood plank

Not sure what happened but the images of stones, grid, coordinates vanished and with it being my move, nothing happened when I clicked on the board. I did not hav th right sid mnu open so I don’t think I activated Zen mode. Clicking on that had no effect. Persisted after game was Finished. I have screen shots. Downloaded the SGF, opened it and the stones were present.

If you refresh the page, it should come back. I’m guessing you’re using Chrome? It’s a weird thing Chrome does sometimes. There’s a hardware acceleration module you can disable to make it stop doing that, but it makes your browser slower in general if you do.

No. I think first time it happened I was using Vivaldi because OGS won’t work in Safari (or Firefox) as of update. I put Vivaldi away and today it happened in Opera 43.0.2442.959. What eventually worked was trashing the browser and reinstalling it. I am using MacOSX 10.9.5.

This is how it happened most recently: I wanted to look at opponent’s list of games. I clicked on the opponent box, then on the userid in the small dropdown menu. Got to the list of gams and then returned to the game (I think I used back arrow). Only the bare board was displayed. On the multi-goban Watch page, all gobans were bare on the first several pages of games that I checked. 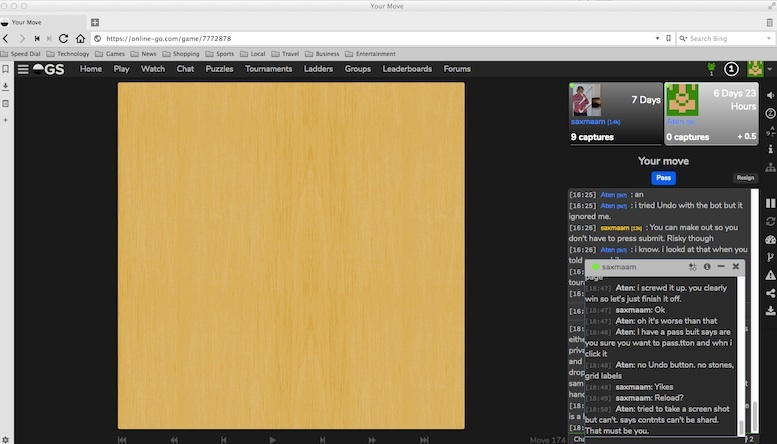