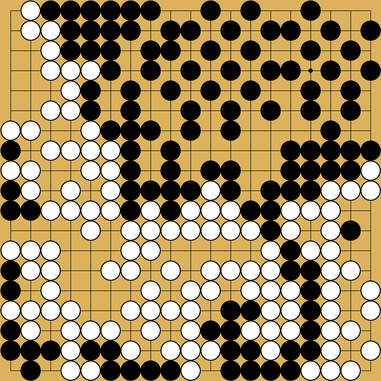 Yeah. Fuego plays like a petty ten year old who can’t accept that the game is over. How could we fix this?

Wrong forum. OGS has nothing to do with bot development.

yes, i once had a game with fuego, to the point that i was wondering if it was about to fill every liberties on the board. luckily it stopped at about 40 to 50 moves down the road.

Wondering why a computer that was doing quite OK in mid game would do such stupid thing. I mean the winrate must have reached 99.9% already.

The bots use area scoring. Dame are counted as points, so filling them is beneficial. Also, stones in your own territory don’t subtract from your score.

Fuego does not calculate a winrate, it’s not nearly that smart.

Dame is one thing, it makes sense to fill dame under chinese rules. This behaviour is something else entirely. No, it doesn’t negatively affect the bot’s score, but it DOES negatively impact the player’s experience. Also, from my one game against Fuego, I’d rate it as weaker than GnuGo. I suspect there are a lot of people resigning in frustration, pushing up it’s win rate.

Wrong forum. OGS has nothing to do with bot development.

We don’t maintain the bot code. This is a very old (in development units) bot. It’s not very bright.

I suspect there are a lot of people resigning in frustration

unfortunately only “fix” we could offer would probably be disabling it completely, which on the other hand seems a shame as it does have a lot of games.
Also if it starts trolling you like that, feel free to report the game. We can often end it quite soon or will at least annul the result if you give up the “struggle”…

While we’re at it, Master Mantis does the same thing (or at least it did the last time I played it).

Which forum would be the right one for this?

This bot is not good at ending the game.

If the game is over and Fuego is playing on, please call a moderator.

This may be in response to your report. I can’t remember having seen it there before. I would only add the word ‘pause’ to it. ie.

If the game is over and Fuego is playing on, please PAUSE and call a moderator.

There is no rush in such situations and it’s a quick and easy ticket for the mods when they get to it.

None at all. Email the developers of the bot if you’re so inclined, but you won’t be telling them anything new. Same as I, in the following sentence. The link to the developers’ email is at the bottom of the page I linked you to in my first response.

Wrong forum. OGS has nothing to do with bot development. http://fuego.sourceforge.net/

If the game is over and Fuego is playing on, please PAUSE and call a moderator.

umm… if it is under Chinese rule it may be quicker to just play along filling in empty spaces. it may take 30-40 moves that will take 3-4 minutes to finish.

I think that it was implicit “if the game is over and Fuego is playing on and you don’t want to keep filling the spaces then call a moderator”.

By all means pander to Fuego’s desire to keep playing if that suits you!

Note that a volunteer has stepped up to look at Feugo code and see if this can be fixed.

Personally, I think it’s legitimate to ask about issues with usability of Bots on OGS in the OGS forums.

No, OGS does not maintain their code but yes OGS admins and users need to be aware of what is going on with them.