Many of us tend to shorten phrases when chatting. I was always sick of all these “glhf”, “tygg” and other unpronounceable letter combinations.
And yesterday I had an idea how to make observance of etiquette as simple and elegant as possible.
I watched two people playing Go. When they greeted each other with light bows, I thought that their figures were similar to the signs < and > at this moment.
So the idea came up, why not use these signs in the game chat? For example, the < sign to say hello, and the > sign to thank your opponent for the game. Or another option: one of the opponents greets and thanks with the sign <, the other with the sign >.
In my opinion, this practice will be better than any unpronounceable letter combinations.

Ummm…there are the chat shortcuts. 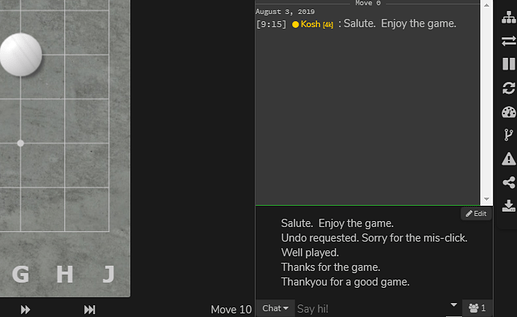 which some people may be unfamiliar with.

Ummm…there are the chat shortcuts.

Well, this topic was worth creating in order to find out that they exist.

They see what you wrote. There is no auto translate on OGS.

You can change the shortcuts by using the edit button.

Thank you a lot!

I read foreign language text all the time. Concerning your original idea, I’m not a fan. And I do not mean to be rude. I personally feel that nothing says “I could care less about you or your feelings” than a single character greeting. I think anything worth saying is worthy of the time it takes to say it.

The modern culture of condensing sentences down to two and three letter groupings, delivered in seemingly incoherent strings, nonsensical whit after foolish jot, really irritates me. Taking that behavior further, whittling multiple words down to a single character…

The modern culture of condensing sentences down to two and three letter groupings, delivered in seemingly incoherent strings, nonsensical whit after foolish jot, really irritates me. Taking that behavior further, whittling multiple words down to a single character…

I didn’t start it. I use full words in my chats. But all these abbreviations are ugly to disgust. In my opinion, a single sign is also not ideal, but it looks better than these disgusting abbreviations.

To me too, but it’s a person bowing: https://emojipedia.org/person-bowing-deeply/

Yes, it’s a shame how crummy the Unicode emoji are in general

when they’re down on their knees instead of standing

won’t work for in-game chat so how about: Ω

[edit] Not a serious suggestion. You would spend forever explaining what it meant.

Well, that answers the rhetorical question, but doesn’t make the emoji any better

OK - I mean “I miss Skye’s excellent emoji”. I don’t miss the application

Tbf though i notice audio quality of it now is better than discord imo.