Recenty in a game on a real board there was a situation where I really wanted to tenuki, but a large group was at stake, so I had to read if it could be captured. And indeed, after reading 5 stones deep I saw a semeai coming and counted 5 liberties on both sides with the opponent to move next. So better no tenuki now. I played a defending move and made a picture with my phone from that part of the board.

After the game we re-created the situation and it turned out that the sequence I read was indeed the most relevant line and after having the stones on the board I again counted 5 liberties for each side.

Boy was I proud. Granted, 5 moves isn’t that deep, but it wasn’t just 5 moves, it was 5 moves until the start of a semeai. Great achivement for a mere mortal kyu who doesn’t count reading to his strengths.

At this point my opponent/friend gently pointed out to me that his stones in fact had only 4 liberties and I consequently I could have tenukied.

So it’s seems my go reading skills have improved that much, that I can mis-count liberties equally well with or without the stones laid out on the board.

Did you keep the picture by any chance?

If we think too much on how weak is our reading then we will all stop playing. So discovering pleasure in this and a challenge too is always a great experience.

Here’s a nice endgame puzzle from a recent game of mine. I smelled something in the right area, but didn’t find the right move. (I was ahead enough to win anyway though.) 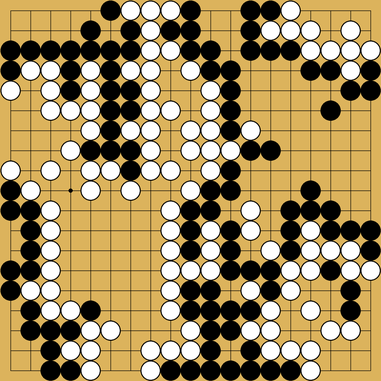 Indeed. I played 1 at 3. Decent intuition, reading needs improvement. Working on it!

I recently read a similar kind of thing in the same way , and decided to play instead of tenuki anyhow: better safe than sorry

That’s same as the example given in attack and defense, that great old book.