My rank went up when I lost

I just ended a really heated game against a player several ranks above me. I lost by 10.5 moku and my rank went up.

Does the new ranking system take into account the level difference if the result is close?

From the chat logs it looks like you were 14k during the game, and then 15k after. You know that kyu ranks are reversed? 1kyu is the strongest, 30kyu is the weakest. So your rank actually go worse, as expected.

FYI the system does not care about the margin of win/loss or if it was by resign or timeout.

Hi there, actually, I started the game as 14 kyu, went up to 13 and then back down to 16, in which I ended the game. After losing I went from 16 to 15. And that would be the full story that you can’t see only looking at the chat logs.

Thank you for your answer!

The step up in your rank on today, Oct 10, has contributions from 3 games: 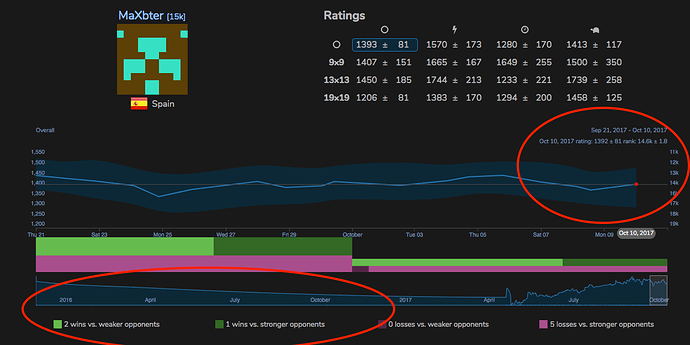 It’s definitely hard to get used to the fact that the game graph is now days, not games.

It means you can no longer see the effect of an individual game on your rank, like you used to be able to, if you finish more than one game per day.

Every time you finish a game, your rating is counted again based on last few games you’ve played, and it takes into account how have your opponents been playing lately. So if you won a game yesterday against someone who got into winning streak after your game, you will most likely gain rating points after finishing your next game even if you don’t win.

It might look weird to see your rating going up and down like that, espesially if you were used to old system where only result of your last game did matter, but the new system should actually be better on taking improvement of individuals into account.

Every time you finish a game, your rating is counted again based on last few games you’ve played, and it takes into account how have your opponents been playing lately. So if you won a game yesterday against someone who got into winning streak after your game, you will most likely gain rating points after finishing your next game even if you don’t win.

Is there any evidence for this?

I had the opposite impression: my impression is that the effect of a given game on your rank is based precisely on only your rank and your opponent’s rank at the time that game ends. This will never change over time.

My understanding is that your rank won’t keep changing over a year or something crazy like that. But I believe all the games in a given ‘batch period’ can affect each other, even the ones you and your opponent technically play after each other. I could be wrong though.
Maybe @anoek can enlighten us a little further?

Huh! That will be interesting to know!

FWIW, it doesn’t seem to apply in this case: the OP’s opponent’s rank is stable in the last few days, and came down, not up, before that.

From OGS has a new Glicko-2 based rating system!

We maintain a running tally of up to 15 games recently played, along with a “base” glicko-2 rating and a “current” rating. Your “current” rating is the rating that everyone sees and is used when match making and computing handicaps. When you finish a game, we add the game to the list of games, and compute your new “current” rating by applying the results of those games to your “base” rating. When recomputing, we also use your opponents’ “current” ratings as opposed to simply the ratings they were when the game originally concluded.

It’s a bit hard to get my head around … does it tell us, anywhere, how big in time the span between “base” and “current” can be?

running tally of up to 15 games recently played

This or monthly, whichever occurs first.

I can see the logic for doing this - for one thing, it would stop people trying to game the timing of their games finishing … if they knew that this happens