My trepidation to invade my enemies territory cost me the game

During this game, there was an instance on the 34th move where I believe I had sentai. However i didn’t know if it was possible to invade the enemies corner. Is it possible? if it isn’t where would have been the best move to play as opposed to where I played? 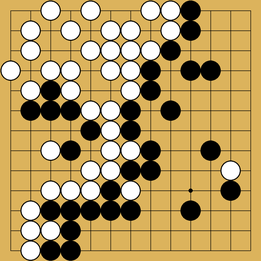 Thanks for any help

I’m not necessarily any stronger than you (so take this as being worth what you paid for it ;)), but w34 and w36 looked suspect.

If you want to extend, w34 at f3 seems more balanced. If you want to take territory, e3 is a nice shimari, though it might leave you behind on score if he then solidified on the right. If you want to stir things up, k5 or l5 are there (although black has a bunch of stones on that side).

w36 is the big one though; it immediately gives you a ripped shape. He attached to your weak stone; my instinct would be to hane immediately at f3 instead.

Ok I see, i was wondering if it were possible to attempt an invade in black´s corner on the 34th move instead of the move i had played

Thank you for such a detailed review, I agree with your comments, but i was wondering if your preferred move on the 32nd move was a little slow, it still allowed black to build up and protect the right side. What i am wondering is if, it was possible to invade black´s corner around the 32nd or 34th move mark?

Yes, it was possible. And I think it would have been a good idea (at 32 or 34) to approach high and go for an avalanche variation. I’ll add one to the original game.

Thank you, can you send me a link once you are done?