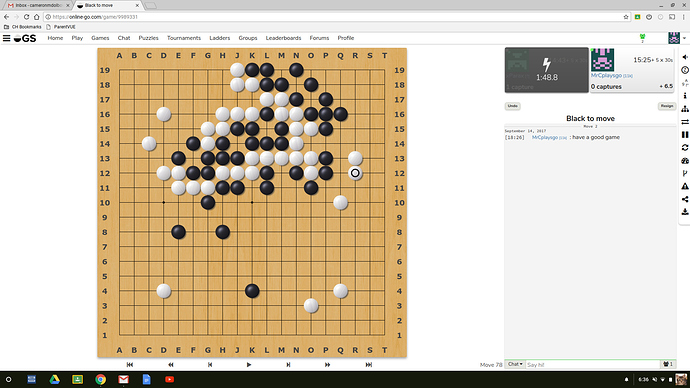 I am assuming this is a new feature designed to stop people who disconnect and then reconnect to play a move and win by timeout.
Thanks OGS developers!,
-MrC

Thanks for bringing this to our attention. I wonder how much time is allowed. On Tygem, I think the interval is 5 minutes.

Y’all should thank @anoek for that one.

Okay. Thank you @anoek for the anti-escaper system. This will make huge numbers of players very happy. The shorter time interval, compared to Tygem, also discourages people from abusing it by pretending a loss of connection in order to get more thinking time. At least two of Haylee’s opponents in her Live Go series seemed to do that.

I like the new feature but I would have liked to know about it in advance. In one game I was having connection problems that required a restart and I believed the game clock gave me time to reboot and connect. It was an interesting game and if I had known about the new feature I would have slugged on with recurring ‘error submitting move’. More site-wide notifications please @anoek . Very happy with the new feature though, now that I’m aware of it. Keep up the good work.

Ah, indeed sorry about that @Kosh

FTR if the game is paused, the disconnect clock is also paused, so if you know you need a reboot for instance, all one needs to do is let their opponent know, pause the game, reboot, and when you get back you can unpause and continue

I think this is bug:
When opponent leave, and already lost by timeout, escaper clock continues to work.
Also, its impossible to see current rank of escaper when you open old game in history.

The goal would be a different solution to the problem of the current situation where (if I understand it correctly) if you time out a correspondence game, you can end up not scoring a loss for that, thereby escaping from a losing situation.

Player starts 20 correspondence games.
10 are in a good position, 10 are not.
Player plays quickly in the good games until they are all won, while making the minimum number of moves required to drag out the other games.
Once all the remaining games have unfavourable positions, player time-outs all 10 games, but suffers only a single loss.

I recently played a live game, that what was supposed to be a rated game for our “national rating system”, against a friend, and he had connection problems (not at all unusual around here), so he left the game for what must have been at most 5 minutes, and lost the game due to this issue.

I wanted to continue, but it felt very weird and we did not find how to fork the game and continue with proper timing (there was a lot of difference in our remaining times, and I could only find how to set a game where both players have the same time), so in the end my friend insisted that it was ok and I had won the game.

But it felt very bad. It was the first time ever that I saw that “lightning” icon and “automatic game resign”, but I figured it must have been always there and I never saw this previously…

Now that I have found out that this is an intended feature, I will say that I very strongly dislike it, at least as it is implemented right now. My motivation is pretty clear from the situation I just described. If we play another match, we will definitely play on KGS, that is much more “unstable-internet-friendly”, even though I like OGS (KGS is ok too, but OGS just feels so much more “modern”). I always play live, never correspondence, and I have never faced the “time escaper” issue, ever (Although admitedly, when I play strangers, I always play blitz, where this kind os escaping is not really an issue. My nonblitz live games here are almost exclusively with players that I personally know from our local go club).

I understand that many people will like this feature, so instead of removing it entirely, I would say that the best solution is to, instead of automatically resigning when such disconnections happen, ask the opponent if they want to force the other player to resign. So, when a player reasonable thinks that they are facing a probable escaper, they can force him to resign. But they can also choose to first wait for a reasonable time instead.

This is a good idea, but you can always pause the game if they are having connection issues, which is what the pause button is basically for. Also, this feature is not currently included in correspondence, at least to my knowledge.

Well, I had no idea that this would happen, so I never thought about pausing the game at that point.

Also, I might have gone to the kitchen for tea, or to the bathroom, or whatever, when the disconnection occurs. Or perhaps I might simply not notice that my opponent has disconnected, until the system abruptly stops the game. I, personally, would very strongly prefer a simple window dialog (or whatever), so that my opponent is only forced to resign if I agree with that.

This is why I liked an old version of the rating system here, where a player had a “rating confidence” which started at 0, went up to something like 1% after one game, went down with timeouts or inactivity, and up with properly finished games, and affected rating changes - e.g. the higher your opponent’s confidence level, the more your rating changed.

But the new rating system has rating confidence…? it just works on a standard deviation curve rather than a 0-100 scale

Well, as long as it’s similar to that one, I’m happy. Then you don’t need to deal with scenarios like the above, where a person times out and you can’t tell what’s legitimate.

I might simply not notice that my opponent has disconnected

Yes, I imagine that it is frustrating for some. And it is of course unfair (as all cheater preventions are to honest people), but I for one like the function. 2 mins is time enough to fix most issues IMHO (even kick my router) and as mentiones above, when playing with a friend you can just keep the game paused the whole time (no need to change servers yet

), but then again I would probably have nothing against a pop up dialog with confirmation… Even though I hate pop ups…

I think that I did not see that :P. Or maybe I did: since I did not know about this feature, I would not have understood it anyway.

you can just keep the game paused the whole time

That would totally destroy time settings. I want to play serious games with time settings, against players that I personally know and trust (we even have an official national rating system, and this online games are rated. Our national association is not huge like AGA or EGF, there is a lot of trust and almost all of us personally know each other. There’s probably around 50 active players in the association country-wise).

I’ve been told that both KGS and Tygem (never played in Tygem) ask you what to do in this cases (like, you’re informed that the opponent disconnected, and can choose to wait, or force resign). I do not care so much about the user interface details (Is it a dialog? Is it a new button enabled on the side?), as I do about having the possibility to choose what to do, before the system automatically chooses the resign option. Special tricks like “you might be watchful and pause the game if your opponent disconnects” might (if I notice) work for me, but they would fail for any new player that has never seen this behaviour (like I was last week).