Not the position, the location. We want it in the icon menu so that it shows on mobile

Ah, you want a clickable thing that expands out the search bar when you’re on mobile… there’s not much room on some devices is the only problem, like I don’t think we have room for another icon on the smaller iOS devices when the tournament icon is active.

I break a lance in favor of the “my tournament” page: I have 103 pages with 50 tournaments each

And even with just the active ones, the list was excessively long. Maybe both?

I know that’s not representative, but maybe there’s something we can all agree to trade for the search function on smaller screens if it’s more important? Also didn’t notifications (

) used to live in the profile drop down? I didn’t hate that

You guys are doing a great job! Thanks for putting in the sweat to having such a nice site!

Could I get any enthusiasm for putting the search bar back next to the Tools?

I gather anoek has experimented with various places, and there isn’t consensus.

Initial poll (until its swamped by “other”

If on the right, are we thinking icon only that expands when clicked?

Edit: changed my vote after doing the mockup below lol

I don’t even think my iOS device is small, in the sense that it’s much much bigger than older iPhones, but it’s not one of these XL ones 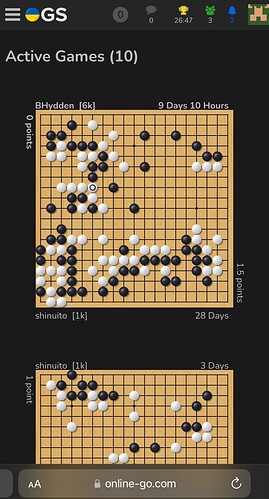 Indeed there’s not much more space to fit a search bar, unless when expanded it hid other icons.

there’s not much more space to fit a search bar, unless when expanded it hid other icons.

It should be an icon that drops down like the other icons behave in the top right.

Unless we bump something else off I don’t see how we can fit it, I have a large phone and this is my nav bar (note the current bug of pushing off my notification icon and my profile icon). I can and will squish them together some more, but yeah when everything is active we don’t have much space left.

Unless we bump something else off

I think that’s kind of what my poll was getting at. Search seems to be one of the most important functions, and yet we’re hiding before other, less used icons.

Of note from that screenshot: most users never see the moderation icon, so IMHO that shouldn’t factor into the layout design too much.

Edit: one more place where space can potentially be saved - replace ØGS with Ø? (Only for mobile!!)

Edit 2: Here I made a proper mockup of what I think would look nice on the small screens. (Actually I could even get rid of chat and still be happy

, this is just what happens to show up on my fresh alt)

Friend list can go under the avatar menu can’t it?

I have in mind something like top right number on avatar for notifications and top left number for chat and then when you click then you see the notification icons for each at the top of that menu (chat on left and notifications on right). Tapping on either of those opens the respective menu thing you get currently (and closes the profile menu I think to avoid overlaying too much stuff on mobile)

And the tournament indicator can go in the hamburger menu and the trophy sign appear there like a notification indicator. Then when you tap the menu, the tournament menu entry is gold or something or has an extra entry for those tournaments.

And while I’m here, the new menu is much better but could be consolidated a bit more I think. E.g call the first item “games” and add “watch games” as an entry after “ladders”… Then you can cut the weird watch/games bit of the menu.

Also the spacing seems weirdly large so could save a bit of space by tightening that a bit.

Also, just get rid of “home” since the OGS logo does that from anywhere now.

Finally, the new overview/home only shows active games now rather than also including profile below that list. I’m not sure it’s an improvement exactly but I’d like to think a bit further about what "home"should really be here.

Sorry to be late to the party with comments, it’s great stuff!

I know i’m late to the party, but I just turned this on in settings about three minutes ago and after those three intensive minutes of investigation I wanna say that it’s lit af

Thanks for the hard work!!!

I would be very tempted to change the name of the ‘Play’ tab to ‘Games’ and move the ‘Watch’ option into that tab. eg: 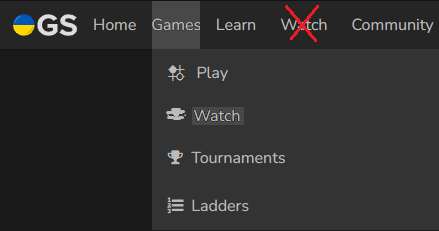 Oh and it would be nice if the profile menu closed when the hamburger menu is opened:

May I ask for an option to position the nav bar on the bottom of the page?

move the ‘Watch’ option into that tab

That would only be temporary. The category is preemptively there in antipation of top board and twitch stream integration, along with possibly some other “watch” themed features.

position the nav bar on the bottom of the page?

Hmm, I feel like that wouldn’t be too tricky to implement as an option… but css isn’t my strong suit