We’ve got a new experimental navigation bar available that we’d like to see how y’all like before deploying it for everyone. It looks something like this:

It’s overall a bit taller for most devices, though if you have a short screen it’ll collapse to be the same height as the existing bar. The bar will also collapse to a hamburger type menu when the window is narrow (like you’re on a mobile device for instance).

For those that enable this, let us know what you think!

On my mobile phone I see on the menu the list of tournaments and the list of ladders in which I am involved. Scrolling down those lists may be tedious if they are long.

height of new nav bar is too big, “space is wasted” feel spam my thoughts

I voted for the new nav bar, I think it’s much cleaner and seeing the search directly is a BIG plus. However I hate all the dynamic sub-menus, especially the tournament list as already mentioned by jlt.

link to profile and settings should be also be in menu, not only inside secret button that looks like your name
people will ask about it

The bar will also collapse to a hamburger type menu when the window is narrow (like you’re on a mobile device for instance).

also, since there is free space in narrow window now, maybe place Search line here anyway?
or mobile users will continue to ask that the most popular question

link to profile and settings should be also be in menu, not only inside secret button that looks like your name
people will ask about it

Funny, that’s been the number one complaint I’ve heard about the current nav system, that the settings/logout stuff is not in the right menu, but rather “hidden” amongst the other stuff

Good idea but I prefer the old nav bar. I can’t find anything more to say. Maybe it is better for mobile devices, not using via phone. Still even there is no option to change, no one would quit the server. Not that kind of change. But I like OGS community becuse of this, it is always developing and has a forum that is asking thoughts of the users. Sorry to discover this place late. I also would like to see the ratings that has been gained and lost attached to each game in the game list on the profile. Just like lichess has. These are all I am going to say when I have a chance to contact the coder boss of the website. I still wouldn’t discourage you by saying it is too bad. I liked it but prefer old nav bar. Thanks for everything.

I think it’s okay, but forums should have more prominent button. 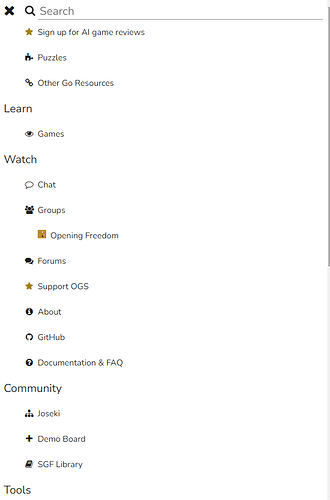 On desktop, at least, this is a big improvement. Many thanks.

if you have a short screen it’ll collapse to be the same height as the existing bar.

it should have collapsed height anyway because currently Go Board size became smaller for no reason.
also on narrow screen if its not long enough, score graph may be partially not seen

Chat needs its own place on the bar. D:

I like it. Certainly prefer this logic than the previous one.

At first glance, what @jlt said and also where’s a home button… I’d like to be able to return to home from anywhere (I’m that person, what can I say).

I think the move circle that is now the move thingie doesn’t work properly, I currently have 8 moves and it shows zero.

I like the new bar (I am using a notebook). But I think Tools could be merged under Learn and I miss a direct link to my profile on top right.

Could we have some customizable “sticky” menu items up top, like home-play-forums?

(I have no idea how things work, please disregard if impossible)

While I agree rather we should minimize clicks to play, I don’t think the number of clicks has changed in this update?

I need one click on desktop, two on mobile with both…

two on mobile with both

I’m not against new menu.
My usage is a little worse with it, though.
Tournaments and groups take too much space. Maybe they could be collapsed.
Lines wrapping make it even bigger.
Also line spacing is too big.

And it’s harder to find the link for the forum!
I like Gia’s proposal of sticky customizable items: forum on top would be my choice. 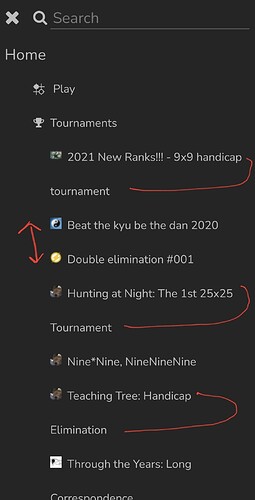 And why is “Play” title below its categories while “Tournaments” is above the tournaments list? 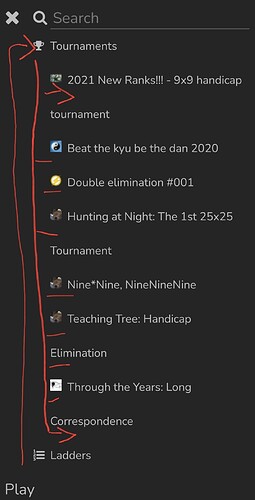