New to the game, need help with scoring! 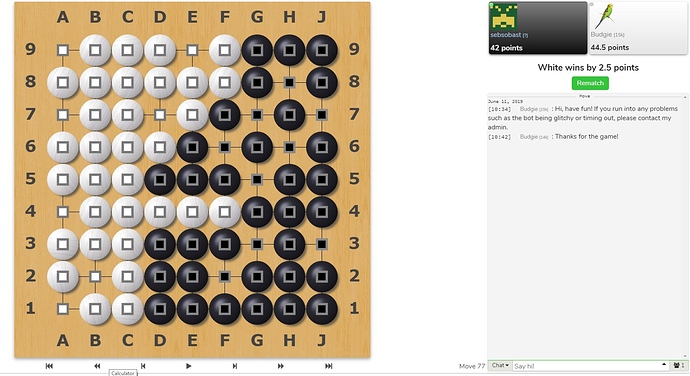 I’ve just started to learn how to play GO. I understand the basic rules and have been enjoying learning to play against the PC master race. However, quite a few times I get into a situation towards the end of the game where I have more territory and have gained more pieces than the PC. The PC then passes, so I pass too. It then awards itself a win, despite me having more pieces and territory. Can someone explain why this is?

To be clear, during this game I won more pieces than white during the game, but this doesn’t show in the final score of 42…

And welcome to the forums @sebsobast

As far as I can see in my quick look (assuming you have learned Japanese ruleset):

Under Japanese rules white wins by 3,5 points. The games score differs by a point because bots always use Chinese score which has some differences but who won/lost is usually the same under both…

Where do you see a discrepancy?

Thanks for your reply Adam, that makes more sense. I will see how it goes… (excuse the pun)

haha
let us know if we can help more. 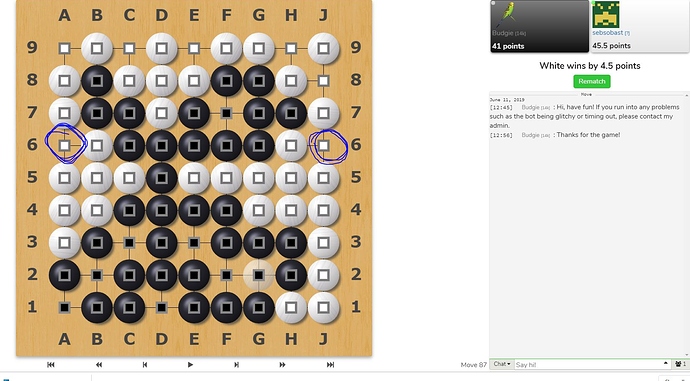 In this game, I’m not really sure how I (white) won - surely black could have surrounded white sections by placing a piece in either blue circle?

Yes, actually all of white is dead, so black should have gotten the whole board for points. The scoring algorithm is by far not perfect, and against AI it’s taken as gospel to prevent players from cheating. That does imply that sometimes the game is scored wrongly.

Moderators can annul ranked games that were scored wrongly, so you don’t gain or lose rank because of a mistake.

To explain why Budgie didn’t play there: probably the program knew it was ahead already, and didn’t see the point in playing, since passing is a win as well. Then the OGS scoring algorithm ruined it.

That’s what I thought - a bit confusing as I’m still learning!