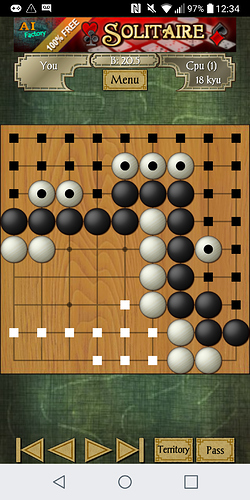 Spoiler: i did the wrong thing and lost

What do you mean “stop” the group? I don’t think you can kill it. If you just want to contain it you can hane at the top 2-2, but moving down into the centre (eg. with a play at 4-3, counting from the bottom left) is much bigger.

How do you know that? Not saying you are wrong i mean, how can i learn to know that?

The short story is: by practice & experience.

If you want to practice, you could do some tsumego.

I understand the angst. One thing that does became apparent early is that you cannot stop your opponent from doing everything he/she wants to do just some of the things they want to do.

In the case of 9*9 invasions (presumably what happened) I found contact plays assisted my opponent to live and often playing a stone a space away to ‘reduce’ expansion space was often successful.

my oppo had to launch several invasions as I had handicap stones. If you look at moves 13-36 I manage to block a lower invasion by forcing a dead shape, moves 49-60ish they launch a successful invasion of the upper left (I didn’t worry about blocking this one as I was happy gaining the influence) and from 195-end they launch a desperate invasion in the bottom middle but unlike the others into a circle of my strength.

Please note though that I suck as a player so the moves played may not be good or even optimal but it does show some actions that might help (against lower kyu players, upper kyu and dans will look at the game and laugh at how easy it would be to prevent my counter attacks no doubt)