Finally (since 2016), we know exactly the number of legal positions in a Go board 19x19

And here a well deserved update to our forum, about this last post:

Researcher John Tromp recently finished computing the number of legal positions on a 18X18 go board. It took 9 months of computations and 4 petabytes of disk I/O. He’s working on 19X19 now.

The same researcher, John Tromp, finally concluded the computation in 2016:

How did they do it?

It is quite interesting to know how they tackled the problem. Even if you don’t know computer programming, the logic can be appreciated if put in simple words.

The first attempt, that worked well for boards less than 5x5, was the so called “brute force”. Imagine you start with an empty board and fill in with black and white pieces until you run out of intersections. Then you substitute the last stone from, say, Black to White or to Empty (the 3 possible states an intersection can be), then you come back 2 moves, and do it again, and again; then you retract 3 moves and do it again, again and again… And you keep counting… This is the brute force. You put all the permutations in the board, in an organized way so you don’t lose track of what you already counted, and that is it.

Not good enough to count even a 5x5 board with the computer power from 2006. At that time, the paper published by Tromp showed this table: 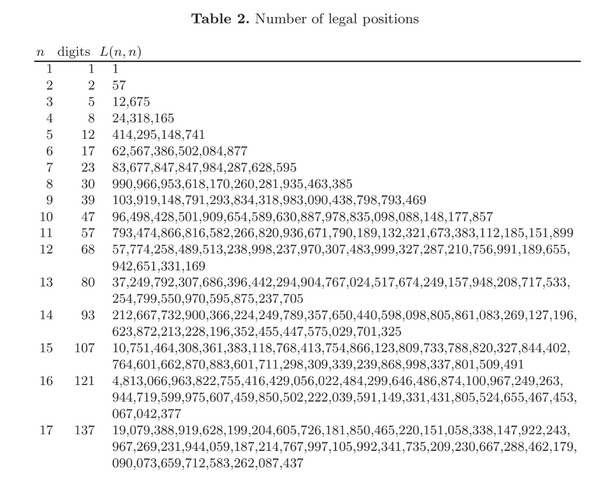 Being the first boards of the table (from 2 to 4) computed by brute force. Then dynamic programming enters the scene.

The idea behind the new algorithm that allowed the computation of all the successive boards from 5x5 to 19x19 is simple: think counting “per elimination”.

Now what they did was use a deconstruction algorithm similar to the Sieve approach to calculate large prime numbers, adapted it, and in the end, instead of trying to calculate the number now called L19, they only needed to calculate the 361st power of a sparse matrix of a 363 billions rows and columns.

It is a sparse matrix because because it represents a graph where you don’t want the illegal positions, only the legal ones organized by “paths”. So instead of counting positions, you will count the number of paths to move from one position to another.

First we see all illegal positions on a 2x2 board:

Now we see a graph that shows the transitions (paths) of all legal boards, the ones we need to count: 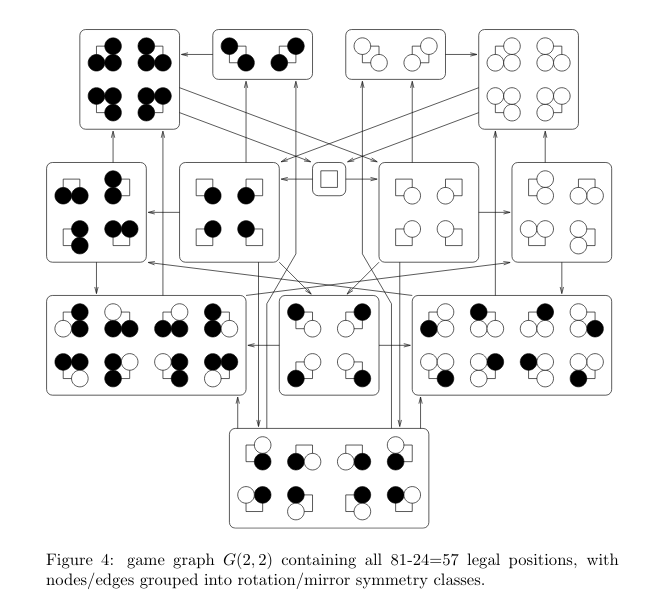 Just follow the arrows and see how you can move from one position to another.

Isn’t that amazing? The total number is just 81-24=57 legal positions. Remember we are talking here about static positions, not dynamic positions. That is: we don’t really care who has the turn to play. Look this small part of the graph:

If we would consider who has the turn, then it would be 8 possibilities instead of this 4.

Also, pay attention on this arrow in red: 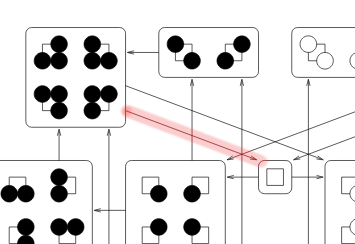 In this position, a black stone is added and this causes the whole group of 4 black stones to die, leading then to the empty-board position, as pointed by the red arrow.

They used a special rule to help creating the positions, “the suicide rule”. That is, after adding a stone of any color, proceed with:

This generalization was shown in the article that it didn’t change the number of positions being counted, and helped to speed up the creation of all the paths.

How long did it take?

It used a Chinese technique to split the computation into 9 simultaneous part, each one contributing 64 bits to the final big number that needs 566 bits to store.

The 9 jobs started at 06/March/2015 and the last job ended at 26/Dec/2015, running in 3 different servers (two in Princeton, at the Natural Science Dept. and the Communication Center Dept., and one offered by HP Helion Cloud).

So, 9 months and 20 days in total, of pure computer power. But, as explained by Tromp, it took 10 years of research and computer evolution (hardware and software evolution).

That is it for today! I hope you enjoyed this “news”, although this is from 2016.

The total number of legal games has also been explored by collaboration between Matthieu Walraet and John Tromp:

They constructively establish that there are at least 10^10^100 (a googolplex) legal games of go.

The googolplex is an absurdly large number, since it has a googol (10^100) digits. I believe the estimate for the number of atoms in the universe is around 10^80. The age of the universe in seconds is less than 10^18. Thus, it seems that there is not enough space nor time to even write down the exact number of go games, much less to precisely compute it.

(Your point still stands, I’d just like to remark that this would refer to the number of atoms in the observable universe. Always irks me when that word is omitted

Aren’t there four possible states on a go board? Empty, white stone, black stone and empty in ko? 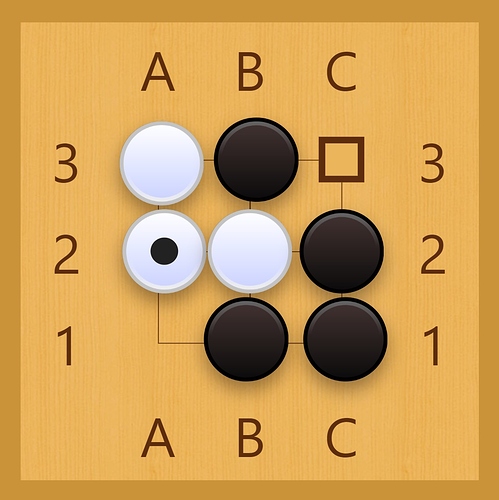 Whether C3 is a plain empty or empty in ko makes a huge difference.

Aren’t there four possible states on a go board? Empty, white stone, black stone and empty in ko ?

In this case, player to play becomes part of the board state as well. And you have to add forbidden intersections in general, not only ko.

There are 3 possible colourations for each point on the board in tromp-taylor rules.

In most (all) rules, Kos are forbidden by forbidding repetitions, not by adding a marker to the board. I’m not aware of rules adding KO as 4th board colouring.

AGA, Chinese and Japanese rules are talking about (whole-)board position when discussing superko, but neither defines what a board position is. (I lost the interest to look the other rules up https://senseis.xmp.net/?Rules)

So no, KO isn’t a possible state for a intersection.

In short, no, “empty in ko” is not a fourth state for a point on the board.

Ko rules depend on more than just the current board state, which makes it neither necessary nor sufficient to think of “empty in ko” as a meaningful state for a point on the board.

Adding a fourth state is also not sufficient, since various forms of the superko rules depend not only on the current board position, but also the entire past history of board positions (since very long cycles are possible), whose turn it was before each position (if using situational superko), and whether the player passed or played a stone (for natural situational superko).

Ko rules depend on more than just the current board state, which makes it neither necessary nor sufficient to think of “empty in ko” as a meaningful state for a point on the board.

Thanks; I think I got it. I was under the impression that a board position is something that somehow also determines what continuations are possible. Clearly, I was mistaken. I learned something again