If you want a short showcase of what toroidal go looks like on vgs, check this https://www.reddit.com/r/baduk/comments/khklyz/vgs_toroid_go_exploration_features/

Anyone wants to play?

Yes! I’ll join if you create a game

Oh wait is the confusion that the onscreen > and < are actually for moving the game moves back and forward, where as shift+, and shift+. (for me) are < and >

You raise a good point. I added the plus and minus keys for adjusting it too and numpad 8462 for left-handed users.

So hard to find players

tried to get some russian groups to announce this but orthodox russians have no taste for such foolishness.

I wouldn’t mind trying a few games of it out

It feels black has great advantage. Because they can mount an attack from the second move. You can pincer on the second move (making an extension from the other side at the same time). If they jump maybe use peep-knight move attack.

I feel like I kinda cheated my way through the tournament with simple random luck.

24 participants were split into 6 groups of 4. There were 12 dans, half, so two dans per group. But division was random (which somewhat makes sense since ranks are from different servers and it’s toroidal). I ended up in a division with 6k, 15k and 16k. But that’s not all. 16k didn’t show up because they mixed up timezones. 6k also missed the tournament. So I only needed to win against 15k.

They misread and pulled out this ladder. Read through it, good practice. 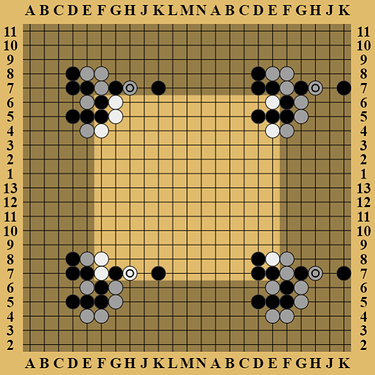 And that’s it, I’m in play-offs. When other kyus had to play TelegraphGo and le_4TC to get through, for example.

But that’s not all. Surely in quarterfinals I’ll play dans now and drop out. Top places in groups go to play-offs, all dans except me. And two wildcards go to play-offs from second places in groups, and randomly it was our OGS-er wurf and another 7 kyu player. And guess what, randomly I got to play that another kyu player. Which is harder than 15k but I’m not that bad at go yet. A little bit of murdering and I’m in semifinals.

I used my first move advantage as well as I could. A little like handicap game. I prefer fast and loose opening rather than slow and steady. 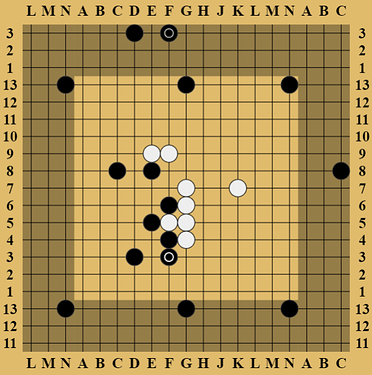 I got favorable position early on, white the situation is still simple. There’s only a few things to keep track of. And later on in the game the quality of my play dropped significantly, I think. In later stages of the game there’re a lot of stones and a lot of different things can interact with each other, that’s the part where the strength difference is showing the most. But looks like it was too late for le_4TC, and they were lowish on time. I gave away some advantage, but still won 7.5 points.

In the final game I played against Yaka. I was tired from le_4TC’s game, but maybe my opponent was even more tired. I got white unfortunately: Variant go server

But the game was going pretty well. I managed to net black stones, and then run out from under attack with my top 6 stones there. 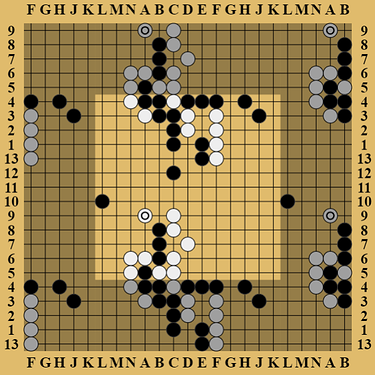 But then situation actually became complicated enough for the strength difference to matter. Black set out a nice moyo. I tried to get in. But Yaka nailed my coffin with this nice tesuji. If I were a better player I would’ve seen this before choosing this var, it wasn’t particularly hard. 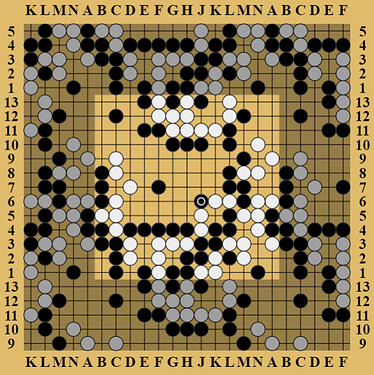 After this it’s all over.

So this is how I stumbled my way into being a runner-up. It’s not that sad since it’s a casual tournament. But feels a little cheaty.

Nice report. Looks like toroidal go is even more mind breaking as what I thought so no surprise that there are many dans in there.

Don’t sell yourself short @S_Alexander, you may have had some luck in the group stage, but the win against me was definitely well-deserved

Normal go ranks can only tell us so much when we’re all new to a variant, I don’t find it surprising at all that some kyu players are quicker to adapt to the torus than some dan players.

I had 4 straight wins before my game with @S_Alexander, but I would not be confident to repeat that performance if we played the tournament over again. Even in the games where I won comfortably in the end, I felt pretty lost throughout the game, and then suddenly found myself in a winning position

I recorded my games, but my commentary is not that insightful, so I haven’t decided yet if I should upload them. Maybe I could post them just here if there is interest.

Here are my games with some commentary (5 separate videos, click the playlist icon in the upper right to switch between them):

I accidentally recorded the first round with the wrong mic, so the audio gets a little better from round 2.

I see, you were doing live commentary as well. Naturally, you might’ve been couple of stones weaker than normal.

Even in the games where I won comfortably in the end, I felt pretty lost throughout the game, and then suddenly found myself in a winning position

This is what all dans say, isn’t it. It’s always something like “oh, I made so many mistakes, you could’ve done this or that and win comfortably, I somehow got lucky here”. Whoever said it, go is a game of luck and stronger player has more luck?

Even though I am often confused when playing normal go as well, taking into account that I’ve played thousands of hours of normal go, and only single-digit hours of toroidal go, I don’t think it is an overstatement to say that I was more lost than usual in these games

I think the boards should be just a little more zoomed out. I prefer too many copies over only two to get a good view of the situation. It’s hard to really appreciate the interconnectedness when there is less than 2 copies in either of the orthogonal directions.

If it were a sphere, I could see the merit in a 3d view, but with a torus it seems to me to be quite annoying, with the things played in the inside of the ring