I wonder if it’s possible on OGS to reproduce the time settings used on NHK tv: 30 sec per move but with 10 extra periods of 1 min to spend whenever you want during the game. 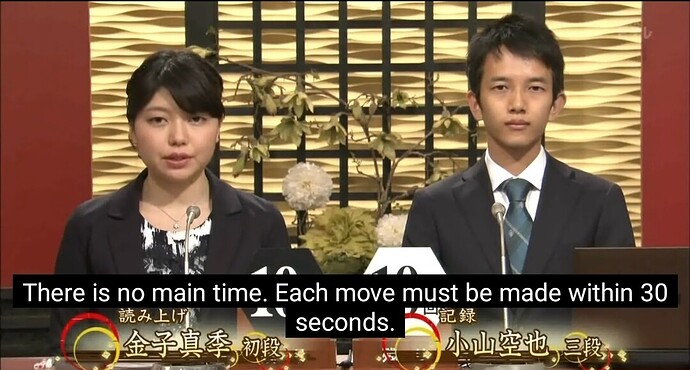 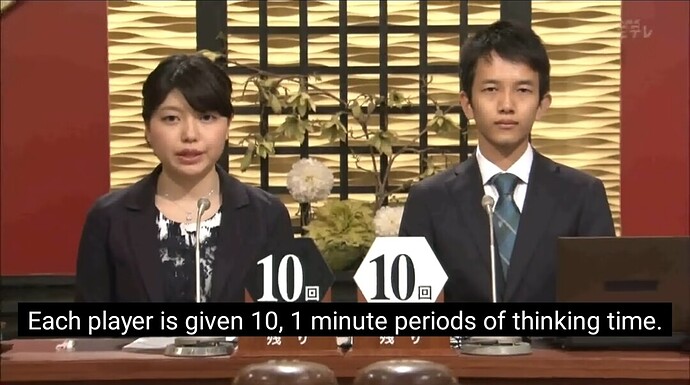 I’m not very familiar with time settings and I can’t figure a way of doing it.

Isn’t that simply 30s per move?

Isn’t that simply 30s per move?

Yes but simple is buggy…

Depending on what is really desired, normal byo-yomi with no main time seems to already provide a fairly reasonable approximation.

One could set up a game with no main time, but 20 x 30s byo-yomi periods. Then, each move should typically be played within 30 seconds, but each player has 10 minutes worth of additional thinking time to spend across the match. Of course, there is a difference in granularity, with players able to spend their extra time in 30 second increments, instead of full minute increments.

What are some other important differences between the NHK Go TV system and this workaround?

I think what @teapoweredrobot is suggesting is that one could add an optional “increment” feature to the main time of byo-yomi (while also setting the initial and max time appropriately) in order to replicate the NHK Go TV time settings.

Actually, maybe it does not exactly work. I’m not too sure about how exactly byo-yomi works on OGS, since I’ve almost never used it, but is an overtime period deducted immediately upon entering it? Otherwise, it seems possible to take up to 89 seconds on every single move without running out of time.

This is what I was going to suggest and I think this is the closest we can get with the currently available options.

is an overtime period deducted immediately upon entering it?

(that’s supposed to be Bowser

maybe it does not exactly work.

Yes actually it probably wouldn’t really work properly and certainly not possible with current timing options. But it was the first solution I thought of by combining two options. I imagined that the 30s cap would apply during the “byo yomi” period so that you’d never get the full minute back but only up to 30s.

The original could be written as 1x30s + 10x1m byoyomi.
It looks indeed similar to 21x30s byoyomi which I agree is the best approximation.

How exactly does this work? When a player takes longer than 30 seconds for their move, do they automatically go into one of their one minute periods?

.
A referee takes away a token from a pile.
There are 10 tokens in each player’s pile.

Is that additional one minute on top of the 30 seconds that they just spent?

I’m not sure how to translate “on top”.
When 31s arrive without a move, the referee removes one token. Half of that minute is already spent. There are 29s left until the token expires.

Can they use multiple of their 1 minute periods in a row?

Regarding that, the 21x30s byoyomi solution is a bit more friendly because the player can spend his extra time with a finer granularity (30s instead of 60s at a time).

Now I wonder what an average OGS user would think about a challenge with that unconventional time setting.

Interestingly, this kind of time setting seems to be just called “byo-yomi” as well.

The 1 minute period is in addition to the time already spent.

I didn’t think so… I must check that.