Recently Nihon Kiin website became even better. Now every player’s card there has a personal record which wasn’t there before.

We can take Redmond’s profile as an example:

In 5 columns we have total matches, won games, lost games, jigo and no result.

2 jigo probably shows his age. I don’t think any of the younger players are gonna have that because you need to find round komi for it somewhere.

Additionally, we have results of last games and scheduled for near future games (excluding TV games): 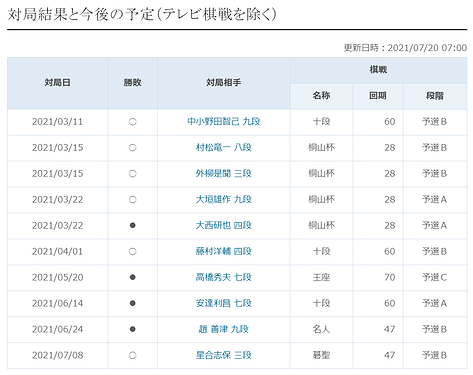 As you can see, in the last game he won against Hoshiai Shiho 3p. I miss watching NHK Cup.

Note that they use black and white circles for the game result which is how it should be done. (First to move is denoted with △ but not included in the table here, makes me wonder who is marked with △ in handicap games.)

Using it we can answer bugcat’s questions.

First, Cho Kosumi isn’t doing that great for now, 0-9 last year and 3-7 this one. No wonder she moved out of the public’s eye.

This kun reading -boshi (星) is the same element as the word hoshi (star), ie. the star point, having been altered by rendaku (consonant mutation).

Expressed by the kanon reading, it’s also the -sei in sanrensei 三連星.