No rating change from rated game 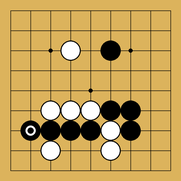 Hmm. I was going to say that my rating stayed the same (124) despite beating a player three stones stronger, but: actually it’s not just my rating, but my profile graph doesn’t show the game either.

[edit: It shows up in my game library though.]

Your opponent is new so he is still provisional. Games against provisional players do not affect your rating

Aha! That would explain it (though it’s the kind of thing that used to get displayed more obviously).

Having said that… he’s played 89 games. I are confuse.

Looks like he changed his rating from 19k to 15k awhile ago. This resets the rating to provisional for 5 games.