About 80% of the time, pro games confound me. They play about 10 moves, then start a giant ko fight that sprawls across half the board and contains three dozen active tsumego that are all beyond my reading level.

Here’s a game that I found very instructive. Yes, there’s fighting right out of the opening, but it’s the sort of instructive ideas that I could well apply in one of my games: 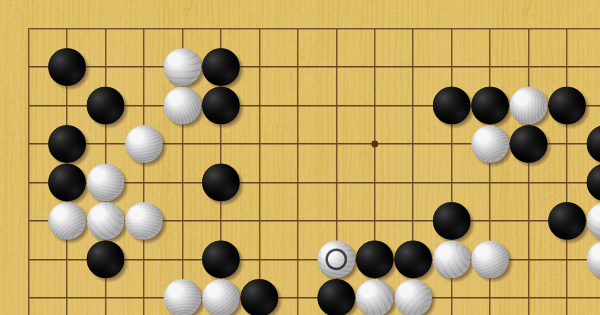 I found this game while studying Nirensei games which continue with small knight and then a star point, leading to a position that looks like a Kobayashi fuseki, but with a stone on the 4-4 instead of the 3-4. White usually approaches with a 1-space low extension, rather than a 2-space extension as is generally seen with the Kobayashi. The idea behind this, as far as I can tell, is that white can invade the corner much more easily with the 4-4 point than he can with the 3-4 point. Because of this, pincers aren’t quite as severe, though they’re still the most common response.

In this game, O Rissei handles the pincer by jumping out, and then bends around the corner group to connect out and make a base on the side. I found the whole approach that he used to do so quite educational. Rissei does an excellent job at playing light with his stones, and repeatedly uses his stones to threaten to surround and atari, pushing his opponent around and building shape until he’s in a position where he knows he can make a good group.

I’m probably doing a terrible job at describing his approach, so it may be best to just open up the game and take a look. Happy studying!

I only glanced at the game but it seems to me that O Rissei just exploited a mistake made by Black on move 11. If move 11 had been the more common one-space jump (11 games in Waltheri vs 2 games for the kick), White wouldn’t have been able to make those light moves that overconcentrate Black in the corner.

I’m not so sure. The 1-space jump for black has a pretty low winning percentage.

The response to that is also really informative, though. White always attacks the lone black stone on the right with a shoulder hit at R9, threatening to eat it and live or gain strength/influence on the outside. There’s a Kobayashi vs. Kato Masao game where Masao does than and wins with an influence approach: http://ps.waltheri.net/database/game/4470/

I wonder if the 4-4 is just a bit loose here, hence the shift to mini/micro chinese or orthodox fuseki in a lot of modern go. Nirensei in general has gotten a lot less popular.

It’s true that the nirensei (and its Pokemon evolution the sanrensei) has been declining since its peak in the 1990s, but it’s still a very common opening – especially as White. I don’t think it can be argued to be “bad” considering the tens of thousands of games that it’s withstood. Certainly there are better and worse variations but fundamentally it seems sound to me.

I think we should remember that we only have fifteen games where White jumps out of the pincer on move 10, compared to over 100 where he takes the corner. So though White has a 60% winrate with the jump out, we are working with a statistically insignificant sample size. For all we know, the favourable White winrate in the jump out variation are due to White having studied it beforehand and Black not being familiar – possible as it’s so rare.

I don’t think Nirensei is “bad” but it doesn’t seem to work well with the bottom star point, at least as far as pro-level play goes. Since 2014, that continuation has only been played about 50 times, and has less than a 40% win rate, which is pretty low as far as Go openings are concerned.

What do you mean by “that continuation”?

Playing Nirensei with a 1-space low approach and the corresponding star point. (Move 7 in the first game.)

I can see that move 7 could be flawed, yeah. Personally I prefer to make an ogeima, which is a bit tighter locally, or play the slide sequence. But I would point out that winrate has a reverse snowball effect: once the top pros abandon a variation, the fact that mostly weaker pros are playing that variation distorts the winrate downwards. So what we could be seeing in reality is that the top pros found it had become either not good enough to beat komi, too well researched for the opponent to be surprised by a secret innovation, or a combination of both.

If you asked me where the top pros have gone with the nirensei, I think perhaps they have been leaving the first approach on the board, calling it kikashi and moving on, like Gu Li does in this 2014 game against Yi Setol. 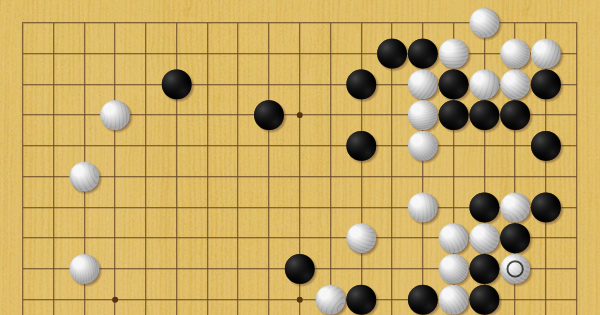 To me, that seems more in line with the flexible nature of the 4-4. The bottom frameworks seem directional, which seems like the domain of an asymmetric approach like the 3-4. I’m SDK, though, so what do I know?

Interestingly, the people that play this way the most are people that were top pros in the '90s. Cho Chikun and Takemiya both have a number of recent games stemming off the Nirensei in this manner.

I agree, this throwaway attitude to the approaches makes the bidirectional nature of the hoshi do more work on the board.