In most devices and browsers I use OGS doesn’t render properly. I only manage to use it properly with firefox on my laptop. I’m wondering if there is the possibility of having access to an earlier (missing some features) version of the front-end that can be made available for players like me (so that I can play on my ipad, for instance). Kind of a minimalist front end only.

This was just a thought, as I believe there are other members in the same situation. Best,

We appreciate the feedback. We have moved our bug tracking to: https://github.com/online-go/online-go.com/issues

In addition to @crocrobot’s suggestion about posting to our bug tracker on github, it would be helpful if you mention what devices and operating systems you tried that don’t work. If you have any screenshots of what the improper rendering looks like, or if you could copy any errors you observe in the dev console for your browser, that would be great too.

Thanks for the quick reply. I just tried again the different browsers, and most of the problems seem to appear in iOS, namely iOS 7.1.2. with both safari and chrome. In both browsers I get a tiny goban, as seen in my previews post:

Hi, The new OGS front end seems to be a problem in various browsers an devices. Now, instead of a blank screen I get a very very small goban at the top of the screen, and most buttons and ad overlapping each other. Most problems I encounter are in ios devices thought… I guess these are normal growing pains. I’ll send a screenshot when later on (I cannot attach images here, for some reason, so need to transfer the screenshot to a laptop first)

In the laptop (running OS Lion) everything seems to work fine in firefox, but with safari often parts of the interface are overlapping, and the page takes quite a long time to load… But it works somehow (A week ago or so it was much worse). 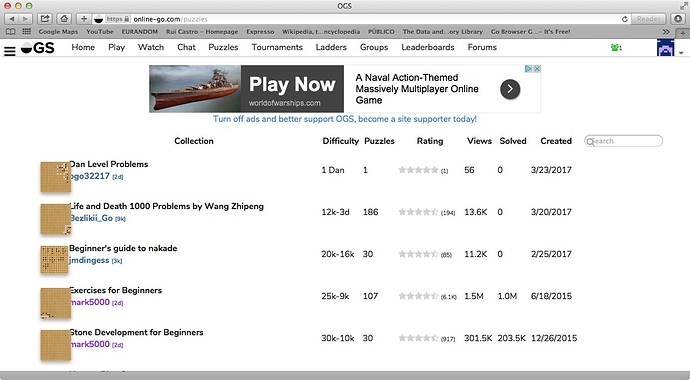