An update has been deployed on Beta.

As always, testing and feedback welcome.

The updates look greats so far! 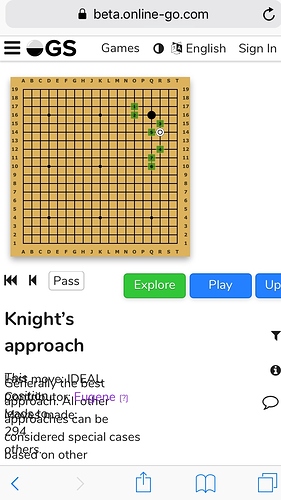 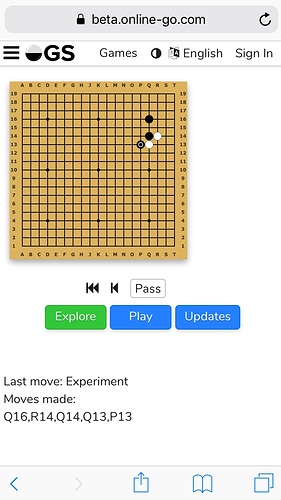 It’s definitely much more functional though, I can play through things

. I’ll check out more of the updates on my laptop browser.

Ah - right, thanks - I need to do more phone testing obviously

But… hmmm… that position looks fine on my phone (Android, Chrome).

More hmmm … I can reproduce this problem under Safari on the desktop, at the phone aspect ratio.

Safari does not extend the display “downwards” with a scrollbar for some reason, instead it tries to jam everything onto the screen. 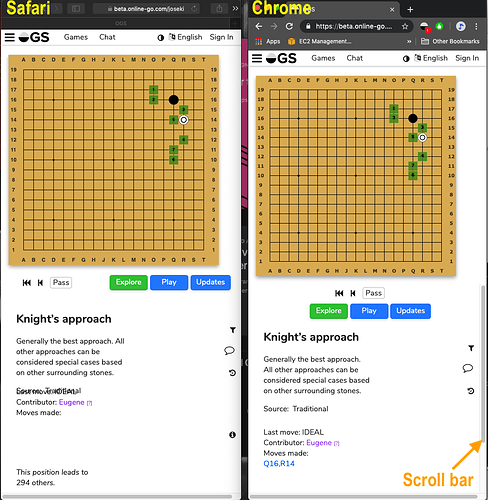 I think I’ve found a small bug. If you press the back button when the board is already empty, it allows you to place a stone and it still thinks the board is empty. 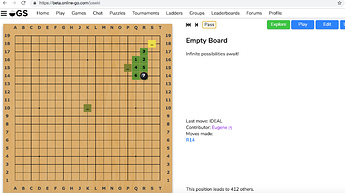 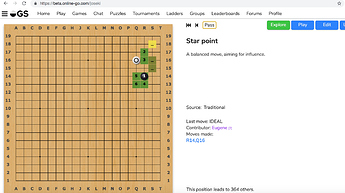 Edit: Related to the back button bug.

If you want white to play the 4-4 and black to invade, just pass 3 times, then press back twice and then you can have white play first and still play out the joseki 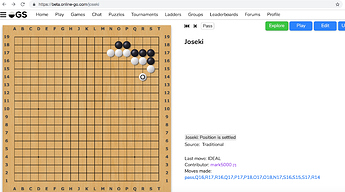 Edit 2: Actually it seems like a combination of multiple passes and the back button can really break things when there’s a pass in the sequence you can break things. Play the 4-4 point, pass 3 times and press the back button and you can use a white stone as part of black’s enclosure

or you can have a black stone “approaching” its own corner

Slightly related bug. If you’re at the empty board the 2-2 point is blue because it’s a questionable move at present.

If you play the 4-4 point it becomes a trick move, which it probably is.

However if you press the back button, it stays yellow until you hover over it with the mouse, and then it returns to being blue.

Edit: That’s me using chrome anyway. Also if you play 4-4 use the back button, hover over to make it blue again and play 4-4 again you can make the trick move be blue until hovered over once again.

I’ve noticed on my phone that sometimes the board resets when I thought I’ve pressed the back button to go back one move. This seemed fine because precision on a small touch screen is sketchy anyway.

Anyway testing this on chrome if if click like a pixel or two (I didn’t count the exact number of pixels) to the left of the back button it resets the whole board. Maybe its the hit boxes for the buttons? I’m wondering if other people can reproduce this?

Edit: It’s probably more like 5-10 pixels, but it’s way closer to the back button than the reset button anyway.

Yes, I see the reset button extends right to the very edge of the one step back button.

In the Play mode, if you get a joseki sequence that has more than one move eg 4-4 3-3 invasion, then if you pass it tells you it’s not in the dictionary in the usual way “you made that up” but then unlike a usual on the board but out of the joseki tree moves, it just kind of breaks.

It lets you play one more move as if you are getting another try but then it lets you play a move for white even if the black move before it wasn’t in the tree.

Edit: Also I’ve noticed sometimes it (play mode) likes to play Q19 but I’m not sure where it gets that one from. It doesn’t look like it’s in the tree but the other ones are as far as I can tell. 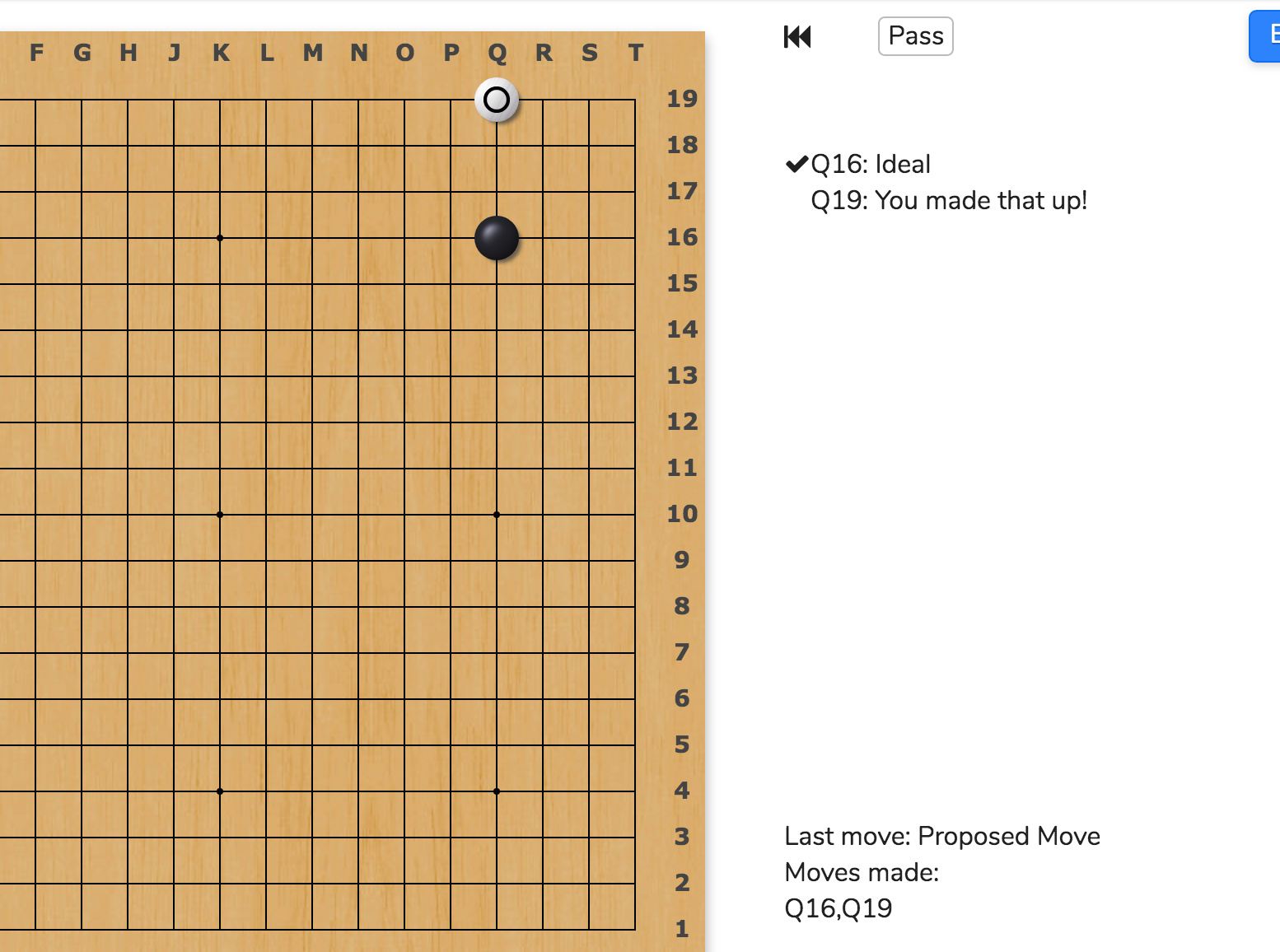 In Play mode if again you get a sequence with more than one move, (eg play 3-3 point to start since that has guaranteed more than 1 move sequences ) then you can get a hint or alternatively swap and play as white if you click the moves made blue link at the bottom.

True fact: TLC could never have worked in a hospital.

Also I’ve noticed sometimes it (play mode) likes to play Q19 but I’m not sure where it gets that one from.

This one is… obviously?.. what happens when it tries to play a Pass, but Play mode doesn’t know about passes. How it gets from “pass” to Q19 I’m not sure, I guess I’m about to find out

So that’s fixed (ready for deployment) now too

Oh you’re right, Q19 was a pass, it does let you play the enclosure. That’s interesting

Edit: Oh wait never mind you could play any move after it, but it still makes sense 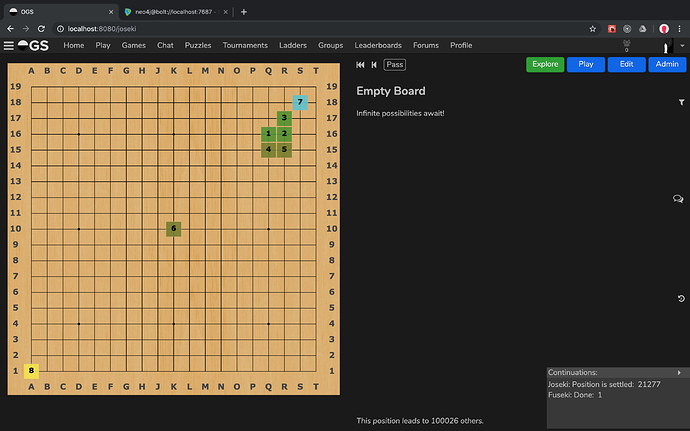 They are in sequences that are about 15-20 moves long starting from the bottom left corner,

When they are in place, there is no perceptible change in the speed of looking up the next move.

By the way, while working setting this up I got some first hand insight into just how many positions there are on a go board.

I wanted to create 100,000 positions in sequences up to 20 long, so I used this simple approach:

Basically strings going right to H then up to 19.

I wrote the code to keep doing this until I’d placed 100,000 stones, or got to the top as a starting point.

I was worried that I might not actually get 100,000 stones down using this approach.

How far do you think it actually went?

When I saw it I thought “man, there are a lot of sequences on the go board!”

Which I knew, but now I really know.

Even if we only count the A1 starting point, the tree would include something in the order of 2^18 ~ 250k steps right?
(There would be some duplicate positions, but via different paths)

I’m not entirely sure I understand what exactly Eugene did so… yea, can’t give you an estimate there.

Just some contradictory statements. You can

Also, I have no idea what

** and another identical one from the node just above it.

is supposed to mean.

Now I did try something based on my assumptions, and the number I get is way bigger than Razza’s.

I took it as “starting at a1 and moving either right or up until you reach one of the edges of the board”, then doing that for each starting point.
First starting point is a1, with tree depth 18, then you have the 3 starting points around it, with depth 17, then the next 5 starting points etc.
Actually now I realise the number of new starting points isn’t 1,3,5,7… It might even be 1,2,3,4… actually

A1 is the only starting point we need if we go depth first to up to 20 moves.